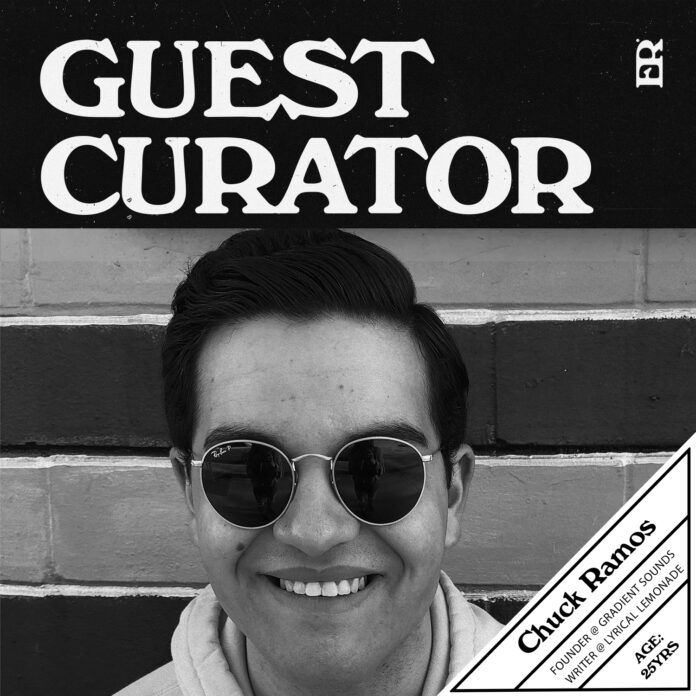 We’re bringing it all the way back to the beginning of Early Rising with this feature. The amazing Chuck Ramos appeared as a guest curator on Early Rising Volume 5 when all of this was nothing but a seed. He was the second person to guest curate the Early Rising playlist and is one of the main reasons why our platform has grown into what it is today. Our heart is to not only highlight the artists, but also the stellar individuals behind them who help push the vision forward. Without a doubt, Chuck is someone who does more than he gets credit for, and we’re so excited to celebrate him for all of the light he adds to this industry.

Originally from San Antonio, Texas, Chuck is now regarded as having one of the most well-respected opinions in the A&R world. Splitting time between Ones to Watch and Lyrical Lemonade, Chuck strives to shed light on as many artists as he possibly can by digging into more music than any of us could ever imagine. Genres are nothing more than a construct for this tastemaker. He is constantly pushing himself to think outside the box, focusing on expansion and growth rather than perpetuation.

Aside from his writing, Chuck is also an artist ambassador at Indify, and he even curates his own discovery playlist, Gradient Sounds. I personally do not understand how he is able to balance so many different positions at once, but Chuck outperforms himself every time. The 25-year-old truly occupies a lane in this industry that could not be replaced by anyone else. His impact on those around him, whether it be with artists or other tastemakers has proven to be his greatest asset and we’re so excited to see all of the groundbreaking achievements that are on the Horizon! Make sure to connect with Chuck on social media to get a better look inside of his world.

If you don’t recognize today’s early riser for his signature pink hair or his amazing TikToks, let me introduce you to none...
Read more
Guest Curators