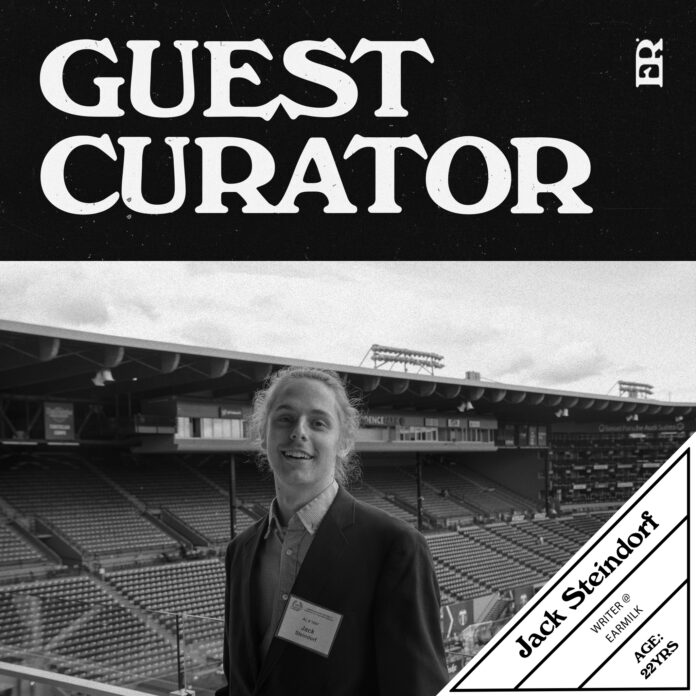 Jack Steindorf wears many hats: manager, publicist, writer, and most importantly, a good friend of the Early Rising team. Reigning from Sacramento, Jack is a prime example of the intersection of music, friendship, and passion that everyone needs.

As a kid growing up in Sacramento, Jack was influenced by a plethora of sounds from all across the nation. From the alternative sounds of Lincoln Park, Yellow Card, and Breaking Benjamin, Jack saw his formative roots established. A sound he is happy to hear again with revitalized alt in 2020. Moving forward, Jack picked up an affinity for East Coast hip-hop. From the first time he heard Joey Bada$$’ 1999 mixtape, he knew that music could tell a story — a really, really good story. After his first concert – Vince Staples and Joey Bada$$ – Jack’s interest in music was peaking, and he was primed for the next phase of his journey.

Jack’s musical awakening started in no better place than a Sacramento attic with a few of his best friends; “Friday Freestyles”, where everyone was sure to bring their best bars, toughest critiques, and their signature Garageband beats. Thankfully, this is where Jack started to realize music was where he needed to be. As a last resort, Jack and his friends would look to YouTube, and like many of us, he was saved by the notorious “Poundcake” instrumental. With each passing week, Jack came to realize he had a bit of an ear for good music, and that was all it took to get the ball rolling.

After high school, Jack went on to Oregon State where he pursued a degree in marketing, although, with the Friday Freestyles in the back of his mind and a knack to further get himself into music, Jack resorted to cold emailing music blogs. From here, Jack found Earmilk, his first gig where he is still writing and loving every second of it. Earmilk was the leap into the industry Jack needed, he then went on to intern at several Public Relation Firms, Epic Records, Warner Music Group, and Warner Records. All of these opportunities did not come without a persistent hustle, however.

Jack’s journey was propelled greatly by his local exposure to the music scene in his time at Oregon State. Early on, Jack assumed something similar to a management role for a local DJ friend, who quickly started gaining momentum, opening for Shwayze and Wack Flocka. With all of this unfolding, he saw a spark and an opportunity for growth.

All of this has led Jack to where he is today, a rising and already prominent figure in the industry. From managing the recently viral BMW Kenny and touring his hit “Wipe It Down,” to working publicity for My Chemical Romance, Carlie Hanson, and Maggie Lindemann, Jack spends his time connecting media and artists. This is where Jack’s love for his artists is able to shine, as he plays a major role in shaping artist image and helping the media tell their story.

With all of these major artists on his plate, Jack masterfully still finds time to highlight his favorite acts with Earmilk. Right now, those acts include artists such as Dustystaytrue, Ashley Kutcher, and SG Ali, all of which received the major Jack Steindorf cosign. He hopes to see his city further shine and projects a major Sacrmaneto takeover in the coming years.

Jack has major hopes for the future, not only for himself but for the artists he works alongside with and the industry as a whole. He envisions a future with fairer contracts, and a stronger focus on empowering artists, from all individuals in the industry. Looking down the road, he hopes to continue to find music he loves, that speaks universally and impacts people with each listen. Helping bring this to life in any capacity would be his dream come true, and with his drive and character, the future is looking bright.

About two weeks ago, I was recommended by a fellow writer to check out an artist named GOM that I am excited...
Read more
Guest Curators