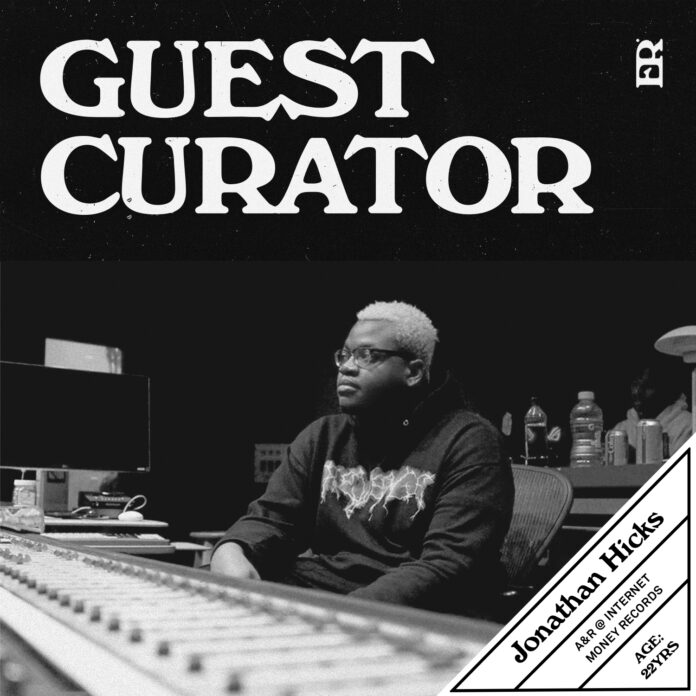 Connecticut native and now LA local, Jonathan Hicks is a rising A&R at Internet Money with aspirations to be the next big executive in the music industry. Already managing multiple artists and working alongside music mogul, Taz Taylor, Hicks has shown immense determination to prove he has what it takes to run the industry.

With the recent success of Internet Money’s debut project, B4THESTORM, Jonathan Hicks is back to the drawing board in hopes of curating the next hit single. Before he got too busy, I was able to catch up with the latest guest curator of our weekly playlist over the phone to discuss how he got his start in music, dream studio sessions, and some of his favorite moments working with Internet Money.

Brett: Did you always see yourself working in the music industry? If so, was there a specific position you saw yourself in?

Jonathan Hicks: Yeah, I always wanted to do music. That was the only thing I was really passionate about besides basketball, and I knew I wasn’t going to be a ball player since I wasn’t that good. So, it was either music or music. When it came down to a position, I always wanted to be an A&R… Well, actually a manager or an A&R was the goal and I accomplished that. Eventually I want to transition into owning my own label and become a full-on executive

Brett: How long have you been in the music industry for?

Brett: How did you become an A&R for Internet Money?

Jonathon Hicks: I was actually tweeting at Taz every day telling him to hire me as an intern or an A&R and he eventually DM’d me that he was going to fly me out to LA so we could work. After that, I started sending him artists and he really liked them, so he signed me officially.

Brett: What are some personal highlights working for Internet Money?

Jonathan Hicks: I love putting sessions together. Sometimes it can be getting my artists with other artists or producers. Honestly, I really enjoy being in the sessions with them and helping them with the type of music they’re trying to make, type of beats to get on, and what direction to go. Getting to help put songs and projects together to collectively help is what I really enjoy.

Brett: What is one of the hardest things about being an A&R?

Jonathan Hicks: Being the new guy and trying to make a name for yourself. You just have to keep pushing and asking for features or sending out beat packs, so people start to become more familiar with you.

Brett: If you could be in the studio with any artist right now, who would it be?

Jonathan Hicks: For a producer, it would be Sevn Thomas. For an artist, it would be Halsey. I would love to get in the studio with her. For the past week, Without Me by Halsey has been the only thing I have been listening to.

Before Jeffrey Eli was making pop music to break the gender binary, he was a pre-teen singing online from his hometown bedroom...
Read more
Guest Curators