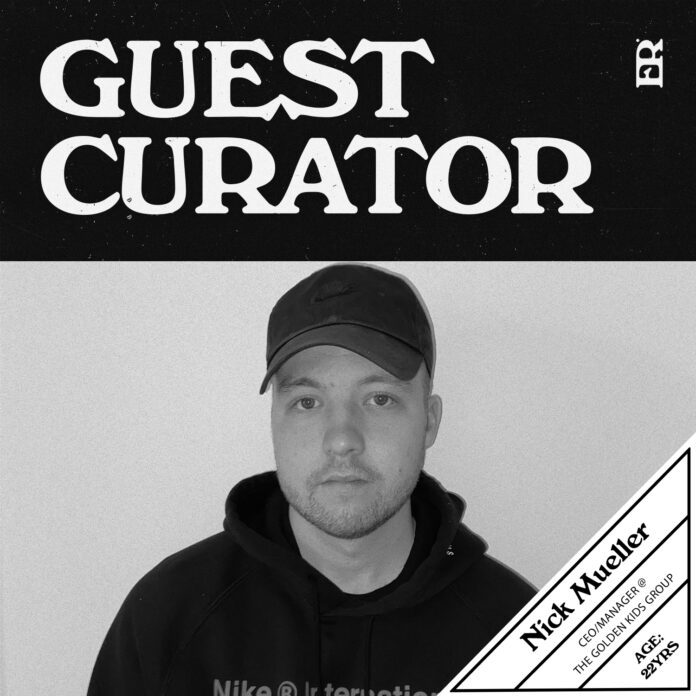 A Conversation with Nick Mueller

Most 22-year-olds are paying off college debts and moving back in with their parents, dreaming of one day acquiring a salary job that will have made their 4-year-degree worth it. It is safe to say that Nick Mueller is not like most 22-year-olds.

The Dallas-bred industry mogul began his career in the course of one of the most formative eras of his life: high school. At the age of 16, while most kids his age were likely not contemplating their next career moves, Mueller was laying down roots as a manager in one of Texas’s largest cities, lending a hand to artists in need of development. Whether he was assisting local artists in booking shows or sending emails to news outlets with hopes of getting his artists press, Mueller made it his mission to learn the ropes of the industry, and more importantly, to be in the room where it happens.

And Mueller did just that. In early 2020, the manager took on the title of entrepreneur and launched his own management company, The Golden Kids Group. GKG serves as home to a handful of pop music’s up-and-comers; the company’s roster includes: Noah Cunane, Ant Saunders, Sky McCreery, TELYKast and 347aidan.

Continue reading to find out how Nick Mueller became a manager, executive and force to be reckoned with, all in the span of five short years.

Q: I want to learn more about how your career came to be. How did you make an impression on the industry at such a young age?

A: I’m from Dallas originally and I started management when I was 16. I was helping artists around the city, trying to get them on local shows or get them press outlet looks, or whatever the case was. After I graduated high school in 2016, I decided that I didn’t want to go to college because I knew that music was my thing and I didn’t need a college degree to do what I wanted to do. Instead, I began shadowing a friend/mentor of mine named Sasha who is based in Austin. Working under him, I learned more about the live side of entertainment and the festival circuit, and soon after that I moved to LA to work in management.

Q: Your company’s roster is now full of some of the biggest up-and-comers in pop music. How did you initially connect with these artists and why them?

A: For me, initially, I have to love the music. I actually saw TELYKast at a show my freshman year of high school, and built a friendship with them first, staying with them whenever I was in LA. So, it’s also really about the person, and it never really has to do with numbers for me. For example, I started working with Sky when he had around 50,000 monthly listeners and a few songs out, and I started working with Noah when he had one song out with only 50,000 streams total. For me, when I decide to manage an artist it’s more about my relationship with them and, ultimately, what feels right.

Q: How many artists are you managing at the moment?

Q: Managing five artists sounds like more than a full-time job. Do you have anyone else on your team that helps you out? How do you delegate work?

A: I have another manager that works with me at the company who does a lot of day-to-day stuff for me, as well as co-managers on a few of the artists. Elizabeth does an incredible job and has been a huge asset to the artists’ success and the growth of the company. A lot of the little things are taken off my hands, which leaves me room to operate on a larger scale.

Q: Speaking of day-to-day, what does your day-to-day look like?

A: Everyone’s on a different schedule, and every day is different. Every morning, I do an 8 or 9 AM call with my team in order to figure out the plan for the day. Then around noon, I try to check in on the artists to make sure that everything’s good and things are getting done as needed. Each conversation can last anywhere between 5 minutes and fifty minutes, depending on what the artist needs at the moment. After I check in with them, I have other calls and obligations to deal with, of course. But, every day is different. No day is ever the same.

Q: Where do you see the Golden Kids Group in 10 years?

A: I want it to grow properly and I want to make sure everyone is taken care of. Ten years from now, I want to have one of the most respected companies in the entertainment business. The company will serve as an incubator with different departments (digital, marketing, press, etc.) so that we can get things done more efficiently and at our own discretion.

Q: Lastly, what is the one thing that brought you into management and why do you believe that being a manager is the right role for you in this industry?

A: First and foremost, I want to help people. I think that management is a very, very strong outlet to do so. I have always been in love with music, so being able to combine that with helping people has been the ultimate dream. I’ve had the unique opportunity to grow with people from the ground up, and I love serving as a kind of nurturing person in an artist’s life. At the end of the day, success is on my shoulders, and I love that. I really do love the pressure.

With five artists and an entire company on his hands, the pressure is on for Mueller. However, the manager turned entrepreneur will likely use this pressure as a catalyst to motivate him even more. Artists, listeners and industry executives alike, if I could give you one piece of advice, it would be this: keep an eye out for Nick Mueller and The Golden Kids Group.

Barely legal are so cool. They’re outta Tampa, Florida which I’ve found to be a hotspot for not only great but innovative...
Read more
Guest Curators