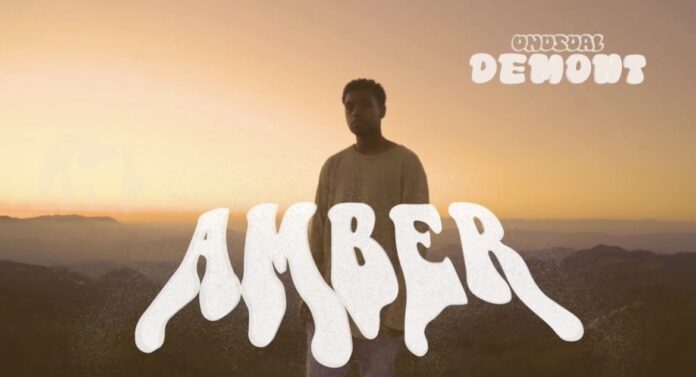 With the release of his debut single, “Amber,” in August, 20-year-old Midwest native Unusual Demont has proven that he is a force to be reckoned with. Since its release this past summer, the track has garnered rave reviews and the rising artist has amassed a large following on both Spotify and Apple Music. Fortunately for listeners, the visual accompaniment to “Amber” has been released today, October 27th at 12 PM PST, delivering a fresh chapter in the song’s already-successful history.

The track serves as Demont’s very own memoir, as he uses the framework of hindsight to analyze and discuss his previous relationships. As he touches on past experiences in love and lust, Demont is not afraid of painting himself as the antagonist, as he claims in his first verse, “I told her I’m the one / But I just wanted fun / Now I’m spending all my funds / But I’ll be on the run.” As he continues to reminisce on relationships gone wrong, however, Demont juxtaposes his initial claims with a more vulnerable tone, as he begs his ex-lover(s) for forgiveness through the following lyrics, “And please forgive me / For what I have become / See I held on for months / But there’s no summer sun.”

The duality of the track’s nature lives not only in the track’s lyricism, but also in its musicality, as the track blends alternative R&B sounds with a pop hook that sheds light on Demont’s raw, evocative vocals. Demont claims that while making music he intentionally masquerades darker lyrics with a “feel-good” sound, “When I’m talking on serious subjects that I face, I try to mask them with upbeat instrumentation because I think happiness equals comfort. Don’t get me wrong, I get in my sad bag too sometimes, but overall I try to be a light source.”

The track’s music video prevails as a brilliant visual representation of this light source that Demont is aiming to represent through his music. Set in a mountainous landscape at sunset, the video shows the artist enveloped in amber hues, an aesthetic homage to the track’s title. Left to reflect on his past only with himself, Demont is portrayed singing of his lost relationships as he travels solo through nature.

Check out Unusual Demont’s “Amber” music video to tap into the visual world of his debut single.

There are certain people in this music industry who I become immediately drawn to, even before I've had the chance to have...
Read more
Home FeatureReviewsPremieres