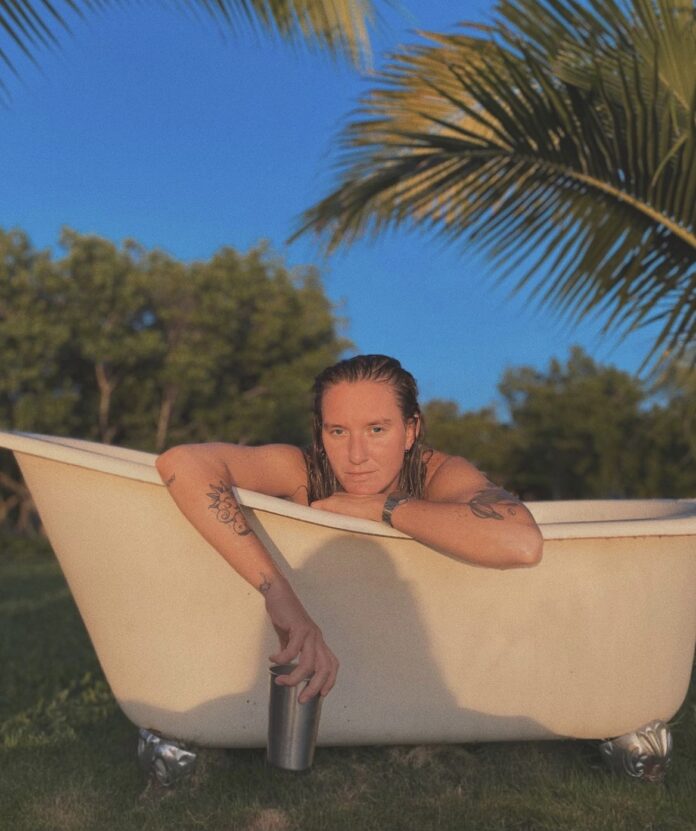 For some time now, I’ve been obsessed with an artist named Jackii Kennedy. I first stumbled on the amazing talent during a routine discover weekly dive and ended up saving a bunch of her songs to my liked playlist on Spotify. After a long time of bumping her music and admiring the art from a far, it was only right to reach out to learn more about what makes her so special. I had the chance to ask Jackii some questions and she graciously gave us insight into her life, music and everything that has encompassed it. Take some time to relax and read the Jackii Kennedy Q&A and learn more about this spectacular talent.

Sam: Take me to the beginning! Where are you from and how did you first get your start in music? Was there a moment or person that influenced you to begin making music?

Jackii: I’m from Key Largo, Florida. It’s a little island on the bottom of the state. Kind of close to the Bahamas and Cuba. There’s a pretty relaxed music scene down there. Almost every restaurant has some sort of live music going on. I grew up around those players a lot and sitting in at jam/karaoke nights and stuff. I took piano lessons really young but gave up around 6. I didn’t get back into it until I was in middle school and got grounded with only my left over practice keyboard and a guitar that my mom’s friend gave me. It was all just for fun until high school. My friends and I would make bands and stuff for talent shows and eventually got good enough to play at some of the restaurants and bars around town. It pretty quickly became my job after that. There wasn’t really a moment or person that influenced me making music (unless you count be getting grounded), I was kind of always around it and it was just the normal thing to do, but there was a moment that influenced me trying to make it a career.

Sam: Who are some of your musical Idols/Who did you grow up listening to? There are always those certain artists that we see ourselves in or want to emulate…Do you have someone like that for you?

Jackii: I don’t really have any idols to be honest but I take inspiration from almost everything I hear. I grew up on a lot of classic rock and old funk cause that’s what the old dudes in the bars would play. Like the Eagles, Elton John, Stevie Wonder, Fleetwood Mac, Beetles, etc. Some old country here and there too. I personally would listen to a lot of John Mayer, Gary Clark Jr., Amy Winehouse, Janis Joplin, Jason Mraz, etc. Also Ariana Grande’s My Everything record completely inspired my first couple projects and I still put is on every once in a while when I’m stuck. I don’t have any artist that I see myself in or want to emulate. I see myself as just someone that loves to perform and connect with people through sounds. I love hearing other people’s music and feeling inspired to create my own.

Sam: When was the moment you realized that you wanted to do this music stuff forreal? Has this always been the goal/dream of yours?

Jackii: That moment came in college. I went for one year and in that year my friends and I were trying to plan this music festival. I had been recording music but it was again just for fun and moving to LA and being an artist was still such a pipe dream. The music festival was supposed to highlight my friends band and it was their way of promoting themselves but they wanted to include me and other bands around town. When they ultimately decided to cancel the festival, my friend Kaden helped me realized I needed to leave and go somewhere where I can take music and performing seriously and have it mean more than something that can just be canceled. That moment showed me how much I really do care about making and performing music and whatever I was trying to do in college wasn’t it.

Sam: How would you describe your music? Is there a certain way you want your listeners to feel when they peep your music?

Jackii: I would describe it as energetic, rich, storytelling, funky r&b. I want people to feel like their experiences can be put into words and they don’t always have to be sad. I’ve written a number of “sad” songs that make people bust it down at shows and they’re singing along but dancing and smiling while it’s a song about cheating or breaking up. Also I want people just to feel something. I want to connect through mutual experiences without ever having a conversation about it.

Sam: What’s your creative process like? When you want to start making a song, what’s the first thing you do to get going?

Jackii: It changes honestly. Sometimes I start at the piano or with a guitar playing chords (that’s usually where my sad songs come from cause ya girl only really knows sad sounding piano stuff). And then I’ll mumble some melody over top into a voice note and slowly add lyrics. Sometimes I start with a beat from a producer and do the same thing. And sometimes I’ll have a whole poem written out beforehand that I want to turn into something so I’ll go through old beats I made or make up some new chords to see how it fits.

Sam: What’s one of your favorite tracks that you’ve created?

Jackii: Right now it’s “Who Are You” the bonus track from my acoustic record. It’s my mom’s favorite and it pretty much wrote itself in like 30 minutes.

Jackii: I really want to get on Hot Ones. The chicken wing hot sauce interview show. I love hot sauce and if you’re on there, it seems like you made it. Also I really just would like to buy a house and support my family. My mom’s been supportive from day one and I really want this to work out for her. I also just want to make music with my friends for the rest of my life and hopefully inspire more people to do the same. This world needs a lot of love and one way I know how to give it that is with art.

Sam: What do you have coming on the way?/What are you most excited about in your career?

Jackii: Currently I’m working on a double single coming out in a few weeks with a short film docu-style music video. I’m also working on a music video for the song I just released called “Nice Try”. I’m most excited to eventually go on a tour opening for someone (assuming the country ever opens up again for shows), and just overall excited to see what this new set of music from this year brings. I’m getting an ep together too that hopefully will drop sometime early 2021.

Jackii Kennedy has the recipe for success. If you take time to listen to her music, it’ll be impossible for you to not fall in love with everything that she’s doing. Her meticulous approach to music and intentionality within her lyrical content is something you cannot miss out on. There are some artists who just have a story to tell and she is one of them. As she said above, Jackii just released a track called, “Nice Try” that is most definitely worth your ear on this Wednesday afternoon. I’ve attached the Spotify link down below, so give this one a spin and make sure you educate yourself on everything that Jackii is doing musically! Enjoy!

South Dakota native and Nashville based singer-songwriter Tiffany Johnson, is the creator of an incredible, catchy, and relatable track that has been...
Read more
ReviewsQ&A