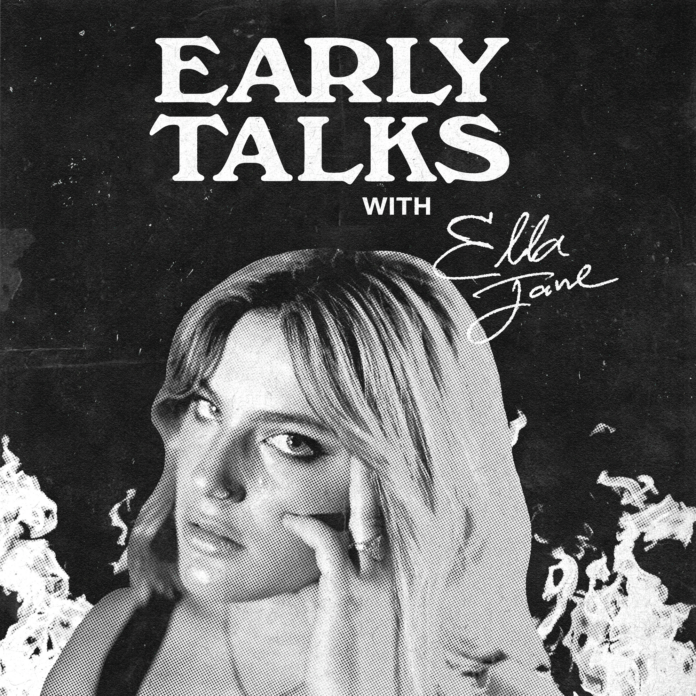 Over quarantine, I would hear about a lot of artists, but none quite like ella jane. In February of this year, the Westchester, New York native released a song called, “The City” that his since amassed over 2 million streams on Spotify alone with her other 2 songs preforming extremely well. What’s most impressive about ella is her age. Only a freshman in college, the up and comer has already established herself as someone who is destined to do amazing things and today, it is our pleasure to sit down and speak with her! Take some time out of your day to get inspired as you read one of this week’s installments of Early Talks! Enjoy!

Sam: How has life been for you? How do you stay sane during all of this Corona Virus stuff?

Ella: It’s been kind of hard. I have pretty bad ADHD and Auditory Processing Disorder and on top of that, technology ruined my work ethic. It’s not an excuse but it just happens. But being slow at everything just work wise and being lazy in general, combined with the fact that its’s COVID and most classes are online and combined with the fact that I’m simultaneously trying to launch a music career…It’s been kind of hard to balance. Not to mention that I have extreme FOMO so when my friends are hanging out, I’m not going to be like, no I have to stay in; BUT, its been alright. Even with all of the shit that I have to put up with, it’s really nice to be around people my age and be independent.

Sam: Well you’re doing a spectacular job. Just from what I’ve seen on Social Media and the way you carry yourself, you’re balancing it all with grace so kudos to you! As far as Early Rising, we love to shed a light on early artists, and although your new and young, you’ve already accomplished so much during your short career, so I’m just excited to talk and hear about your story! So take me back tot he beginning and tell me about how you got into music initially?

Ella: I come from a very musical family. Well actually, half of them are musical and the other half “appreciate” music. I was named after Ella Fitzgerald and my little brother’s middle name is Coltrane. My dad is just a Jazz freak. I don’t know how he got away with naming us but he did. So he’s just always played Jazz Piano outside of his work and my mom is kind of tone deaf, but she just loves playing music, so I grew up surrounded by Jazz and a lot of Soul; Rolling Stones, Fleetwood Mac and people like that; which I’m very very grateful for because I was thinking about it the other day and I’ve never met a normal person who grew up with their parents not exposing them to the Beatles. I always think about nature versus nurture and wonder if I’d’ still be just as in love with music without it.

Sam: And that’s my question! I really want my kids to be musical and have an appreciation for music, so I’m trying to figure out how to make sure it happens. Do you think if I expose them to music early on and feed them great music, they’ll be in to it?

Ella: I honestly think so. Or at least they’ll have a good taste! I feel like children’s music doesn’t have to be children’s music. You can play them whatever you want and they’ll be like yeah I like this.

Sam: I’m glad we agree on that. But, keep going with your story!

Ella: So yeah, my dad put me in piano lessons when I was four. I have a twin brother and he rejected it. He sat through it for years and ultimately just said it wasn’t for him, but I loved it and I’m really bad at reading music. I have a pretty good ear, so I just loved it. It’s funny because I was really horrible with having to formally practice, but I guess in a way, I was practicing because I would just be sitting there playing for hours. And as soon as I put all of the pieces together that I could sing and play at the same time, that was pretty much when I started writing. I would write a lot of stories when I was a kid, so that was when I put it altogether, but I’ve just been in love with songwriting ever since. It kind of started just as an outlet and then as I got older, I became really obsessed with the mechanics of songwriting and figuring out how to do it well. Songwriting as a whole just quickly became my passion.

Sam: Amazing and where are you originally from?

Ella: I’m from Westchester New York, so about half an hour outside of the city.

Sam: Before Covid, did you make it to NY often?

Ella: It’s funny because I took it so much for granted, living in the city. I was always like, oh yea Senior Year I’ll go in all the time with my friends  and I’ll start playing live shows and then February hit and it was like never mind. So I haven’t been able to go since.

Sam: Got it! So take me back to the first moment when you realized that music could actually be your career! Tell me what it was like to experience the success you’ve gotten so far.

Ella: I think it’s been a lot of imposter syndrome honestly. It honestly wasn’t until the last song that I put out when I was finally like oh this is something that I can pursue. I think it was just this thought in the back of my mind since I started writing that I knew this is what I wanted to do. I just wanted to wake up every morning and write songs; but, I understand the pressure that parents can put on their kids growing up and my parents were actually super supportive. But the town that I grew up in, a lot of my friends parents were very successful so there was just a lot of expectation that we had to be on this path where you eventually get into a good college and study hoping that you’ll make a lot of money. So it was hard growing up around that culture knowing that this was what I wanted to do. And even as I’m in college and I’m like oh there’s literally nothing else that I’m good at. I really liked writing so I thought I wanted to be an english major, but I hated essays. So after I put my first song out on my own, I was able to get some really genuine responses about it and that’s when I started to realize that I can really do this.

Sam: How did you meet Ben Locke, your manager?

Ella: So there is actually this girl I went to HS with and she was putting out music with Level for a little while and I wanted to put out my first song and I had no idea what to do and she told me about Level. She got Ben’s contact from someone and the rest is history. He was just there. I was pestering him about advice on everything but then eventually we would just talk more and he heard more of my music and eventually we decided that he’d manage me.

Sam: You’re extremely lucky. He’s such a gem, so hold on to him. The best managers from what I’ve seen are the ones that a lot of people like and everyone loves Ben. Do you think he’s been a huge reason for a lot of your success and confidence?

Ella: Yes absolutely. I still think about a conversation that we had about a month ago where I was just really frustrated about a song and my confidence about it was really low and I found myself doubting it abunch even though it was a song that I really loved. But at that time when I was struggling with the song, I was also falling behind in Homework and I just needed Ben to tell me if he thinks that this could happen and he was just like, “this already is happening.” It was just nice to hear it from someone that I trust. I trust his taste and he clearly wouldn’t be wasting his time with me, especially right now when I’m not making a lot of money.

Sam: I love that. Well to wrap up, I would just love to ask you this: If you could give advice to a young girl like yourself who is trying to do music, What would you tell them? Or even better, what advice would you give to a younger Ella?

Ella: I would tell Younger Ella, there is no need to feel embarrassed. When it comes to making music and putting it out, I would try to do my own thing, but I was also equally as scared of being judged. I went to a very small school and I think about how much earlier I could’ve realized this lesson. I think feeling embarrassed until I was ready to put out music was the right move, but in hindsight, I wish I would’ve believed in myself a bit more. But as a young girl in music, I would just tell anyone, it’s just so important to put out the music that you believe in and love. There are very few female role models who aren’t performers. When I was a senior in HS, I did this project on women in music and the statistics aren’t surprising, but they’re upsetting. I think right now, it’s something like less than 4% of producers are women and 16% are songwriters and over the past 5 years, on the Billboard charts, most of the top songs are written by like the same 5 dudes and so I didn’t believe that this was a career that I could have because the only career in music that women can have are these insane once in a lifetime performance opportunities. It’s either you’re Taylor Swift or you work a day job and be sad. But yes, I would just say to keep trying and don’t give up.

As you can see, Ella is one of the most impressive people who we’ve ever had the chance to speak with on our page. If you’ve had the chance to speak with her or follow her on socials, it’s evident that she’s not just here to make amazing music, but she’s also here to spread her light all across the world. I’m so excited for her career as I know that she is going to do some amazing things. I’ve attached her Spotify discography down below, so if you’re unfamiliar with her, take the time to check out what makes her so great!

As I write more and more articles about the music that I love, I’m starting to realize that every artist’s journey is...
Read more
Interviews