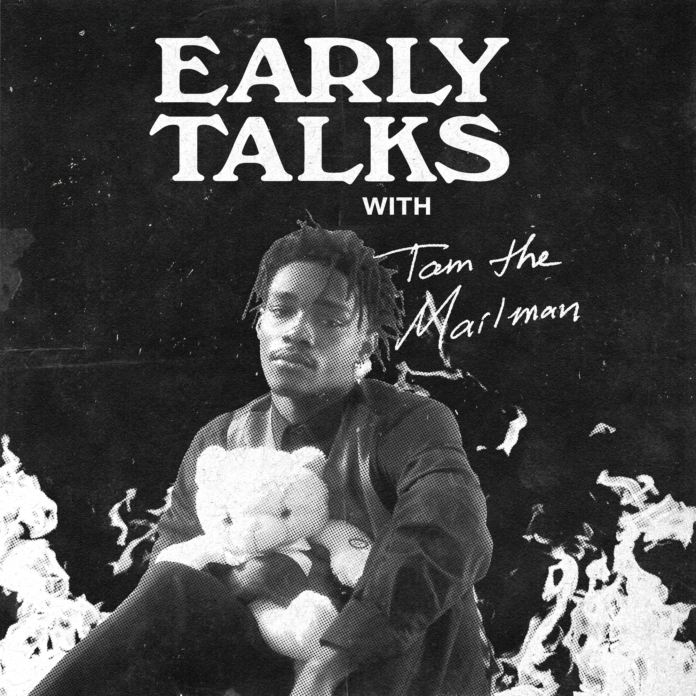 Before we hopped on our zoom call, I started scrolling through Sean’s catalogue on Spotify and I noticed that almost all of his releases are singles, perfectly spread out over the past two and a half years.  This immediately caught my attention, and I made sure to bring it up in our conversation.  He told me that he would never put his fans through a 26-song album.  He understands how attention spans are shrinking and puts his fans first when conceptualizing each piece of work that he releases.

Sean Brown, better known as Tom The Mail Man, is a 22-year-old rapper/singer/songwriter/producer who is capturing the attention of fans across the country with an individualistic, non-conformist sound he has been perfecting since high school.

Just from our conversation, I’m confident that the charismatic, confident artist will be a household name sooner than you think. Take sometime out of your day to read Early Rising’s conversation with one of our favorite rising stars below.

Ben: Let’s start off going back to the basics.  Tell me about where you came from and the experiences along the way that shaped you into the artist and human being you are today.

Tom: I was born in Philadelphia.  My family moved soon after and then we finally popped up in this little town in Georgia called Monroe.  I’ve been here for about 14 years. Monroe is pretty country, like country country, with cows, horses, chickens, and grass everywhere.  It’s a quiet and beautiful place, but as a teenager, it’s not the most incredible place to be.

Ben: When did you start getting into music?

Tom: Somewhere along my timeline in high school, around 10th or 11th grade, my homies would make music but I wasn’t too into it.  Eventually, I got curious, and went over to my homie’s place.  He had a studio setup and we started out just making beats on Fruity Loops.  I made my first song and was like, ‘I’m kinda good at this.’  Looking back on it, that song was horrible but back then I started to see my music progress and then I kind of fell in love with the process.

Ben: So what happened after high school?

Tom: I originally went to Shorter University for Track and Field.  I didn’t think I was going to go to college because I didn’t have the grades to go but somehow I ended up out there.  Basically after the first semester I had to make a decision.  My grades were horrible but my coaches told me they could finesse me back into school if I got my grades up and came back to the track team for the following season.  My coaches heard about my music and told me that I had to pick music or track. I thought about it for like two weeks and then met my coaches in the cafeteria.  I told them that I was gonna be doing the music thing–full time–and they looked at me like I was the dumbest kid on earth.  My coach looked like he was going to choke on his food, literally.  I was super nervous and they just looked at me and said, “well I hope it works out for you man.”

Hahaha well, it fucking worked out.

Ben: What happened from there?

Tom: I finished the semester as a student.  Everyone on the team kept telling me that they needed me but I was just in my room writing, writing, writing all the time.  I did the best I could in school but I didn’t make the cut and I ended up getting kicked out.  I didn’t really tell my parents about it, and at that point, I decided that it was either music or nothing for me.

Ben: Did you ever have an aha moment? One of those times where you figure out what you’re missing and everything just seems to fall into place?

Tom: My whole thing was like, alright these guys like trap music, but I’m out here making this Boom Bap shit.  How am I gonna adapt? How am I gonna make these guys want to listen to me while staying true to myself? That was a battle for a while and then I got put on to X and at first I didn’t really like it, it didn’t make any sense to me.  Eventually, I fell in love with him as an artist and that’s what made me embrace other types of music.  Before X, I was a Boom Bap head and I stayed strictly in my lane.  After listening to X, I was able to expand my mind and my sound.

Ben: What happened next?

Tom: I made this song called “Little Tommy” and that shit got more traction than anything I released before.  It had these hard hitting beats, it had anime moans in the background, it was hella catchy and repetitive. I was talking my shit and it was completely different than anything I had been making before.  That’s the moment where I was like, ‘ok, I don’t have to be boxed in.  I don’t have to only make one type of music.’

Ben: So where does Tom The Mail Man come from? How did you come up with the name?

Tom: It’s the most random thing. The idea behind the name is that it’s something that triggers people to speculate and become judgmental.  So when you hear the name, you probably don’t think I’m black.  You know, no context at all, just Tom… The Mail Man.  You probably think I’m corny as fuck, like some meme rapper.  You probably think the music isn’t all that great.  But then you get hit with everything: you see what I look like, completely opposite of the name! The music is relatable, it’s a different variety blending R&B and rap. It’s music that you can show your parents.  I think that’s the beauty of the Tom the Mail Man bag.  It’s all about the music and taking care of the people that ride with you.

Ben: What’s next for you? What should fans be expecting in the future?

Make sure to check out Tom The Mail Man’s most recent release, “Faceless” and keep your ears peeled for what he has in store.  Enjoy.

I’ve definitely been diving deep into artists who strive to blur the lines between different genres recently.  I think my initial attraction...
Read more
Interviews