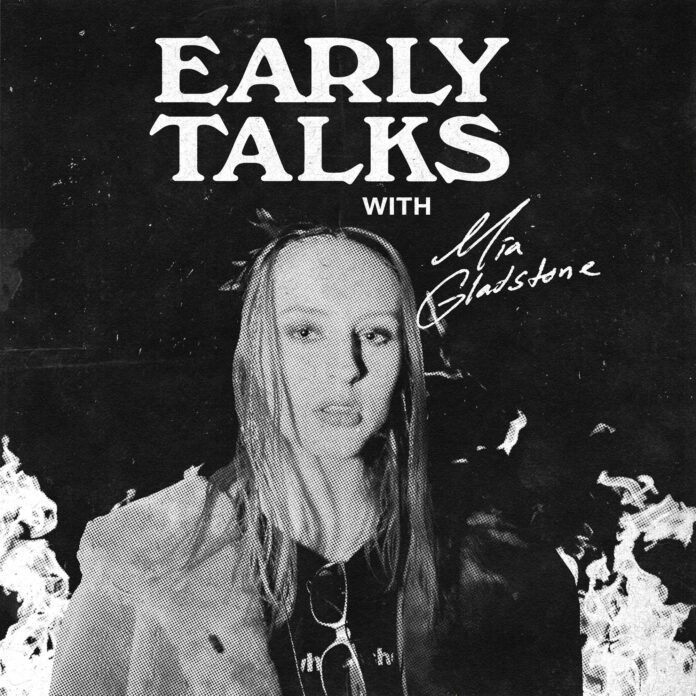 Mia Gladstone is the quintessence of an artist who knows how to capture a restless listener with an indescribable sound that fluxes between alternative R&B and neo-pop spaces—she’s the bona fide visionary that 2020 desperately needed. Her unapologetic and charismatic energy is inspiring and a clear to connect to her candid approach to music-making. Every time I listen to her, I feel empowered and edified while simultaneously just wanting to dance—the holy trinity of what good music can do.

I was lucky enough to have the chance to catch up with Mia about her year, vegan burgers, and producers she admires. Be sure to check out her latest EP, CYCLE/S on 12/4 and enjoy the latest version of Early Talks!

Mack: Catch me up on what 2020 has been like for you—what have you been up to besides making music?

Mia: 2020 has felt like a long year. It’s hard to even think of what I’ve been up to all these months… I haven’t even made much music. I’ve also been a lot more focused on my health and wellbeing than in previous years. I started doing breathing exercises and hanging in nature. I’ve also had a lot of time to spend with people I love – I’m very grateful for that. I recently moved out of my childhood home in Jersey so that’s been a big shock to the system. I’m just trying to make the most of my human experience & do things that fulfill me, disconnect from the unnatural that has consumed me for so long… return to what really makes me feel good.

Mack: For those unfamiliar with you, if your music was the soundtrack to a moment or feeling or time, how would you describe it to them?

Mia: Imagine you’re eating the juiciest, most flavorful, cheeseburger with bacon, avocado, lettuce, tomato, grilled onions, jalapenos, chipotle mayo and cajun fries with a Nutella milkshake on the side & you find out it’s all vegan (& made with utmost love). That’s my music.

Mack: When was the moment you realized you wanted to pursue music as a career? What were you influenced by at that time? Could be music, friends, other art forms…

Mia: I’ve always known I’d pursue it. Ever since I was a little kid I sang and wrote songs and the evolution of that was very natural. It became a reality once I was in high school and everyone was applying to college… I knew that path wasn’t mine and I committed to being a musician full time. I take influence from a lot of things. Daily life, micro interactions with strangers, pedestrians, colors, public transit. It all feeds into my expression.

Mack: Walk me through the journey between that moment after graduating high school and where you are now.

Mia: I’ve been through a lot since I committed to being a musician. I’ve cycled through people and habits. I’ve had a lot of lows over this span of time… dealt with unhealthy relationships with myself, people around me, vices… but all in all I’ve grown. I’m grateful for everything that’s happened. Shitty studio sessions, industry people with bad intentions, exploitative & hyper-sexualizing men… It’s all led me here. And now I know what’s important to me, and I’ve attracted beautiful loving friendships into my life. It’s all a blessing. I’ve learned to live through the lens of love – treat people with compassion, and I’ve found that being open to learning and making mistakes sets you free.

Mack: If you could create your own label, what would you call it, and who are three artists you’d sign?

Mack: I love the @producerswhoproduce IG account! Can you tell me about what inspired the idea and shoutout a few women or non-binary producers we should know about?

Mia: Thank you! I was inspired to create the account because I wanted to see non-male creatives being represented in the producer world. I never had producer role models growing up who looked like me and when i found the joy of making beats i felt inclined to share it. I wanted to create a space where people would be empowered to try something new and express themselves through this medium. It’s been a lovely journey so far. I’ve focused on artist spotlights where I interview artists & producers about their experiences in the music industry and advice they have for (typically non-male) people who want to produce in a cis-male dominated space. I’ll be expanding the page with beat breakdowns, tutorials, and submissions. I think it’s important a platform like this exists to show people there are options beyond what we tend to see in the mainstream. There are so many people producing amazing music from all walks of life. Some producers I love are Salami Rose Joe Louis (@salamirosejoelouis) , Elinavvy (@elinavvy) & TIMA (@timalikesmusic). I have a couple artist spotlights on the page and lots more coming – these are also people you should support.

Mack: “FOOD” to me is an anthem for reclaiming your body after being conditioned to feel shame about yourself growing up—something a lot of young women, myself included, have struggled with navigating. What inspired the track and how do you hope the song resonates with people?

Mia: I love this take away. And I’m sorry you’ve had to deal with shame around your body growing up. It’s a reality that most people face, especially female presenting people.

“FOOD” was inspired by my experience in this world as a woman with big boobs. I struggled with gender growing up. I felt very boxed in and rejected the notion of being a girl throughout elementary school. I would tell people I was a boy and to support that expectation I threw myself into sports and did basically all that I could to convince people not to treat me like a girl. Then around 6th grade I started developing boobs. There was this instant shift in how people treated me. I was sexualized, called a slut for wearing tank tops, sat in the corner of the classroom so as to not distract my male peers. It was humiliating and I still imagine myself with a flat chest and am often surprised when I see pictures or videos of me now. I discovered that eating less made my boobs smaller. It felt kind of invigorating… to not eat all day and weigh myself constantly. Look in the mirror and see myself appearing more angular, smaller boobs, defined jawline.

I didn’t realize until years later that my struggles with eating stemmed from me rejecting the constant sexualization of my body, by shrinking it. Writing “FOOD” was my way of being honest with myself and to the world about what my experience has been like. “I don’t feel like me when you’re talking.” – I don’t see myself the way people sexualizing me see me. Their perception being forced onto me in this way, like ‘this is who you are. We all see you as a sexual object,’ people dictating how I’m supposed to exist… It all feels out of my control. I wanted to bring awareness to this. My body is not here to serve others and my existence is not inherently sexual. I want people to listen to my words, take it all in. We make a lot of assumptions in this society. We don’t think of how our words affect people. It can feel minuscule to the person making the comment but it’ll stick with someone else forever. We need to be sensitive and perceptive to others. And accepting. No one has control over their appearance and you don’t know other people’s pain. I wish that when I was younger someone had talked to me about how my body would shape my reality. Maybe I wouldn’t have felt so alone… I hope “FOOD” can help people going through similar struggles and make people who don’t relate more aware.

Mack: What was the most rewarding part about recording your new EP and what are you looking forward to most with it’s release?

Mia: Making CYCLE/S was very therapeutic. It allowed me to release some negative feelings and better understand myself through expression – writing it all out in a safe space with Danny (the producer) helped me to evolve and learn from my patterns and break the cycles I’ve been bound to. I am looking forward to people receiving the music and connecting with me & others through it. I’m hoping the EP will create a safe space for people to be vulnerable and honest with themselves and people they feel comfortable with.

Mack: What’s something you hope to make a reality in 2021? Let’s pretend COVID-19 is under control by then for the sake of the scenario.

Mia: I hope I can travel and eat delicious fruit and bask in the sun, connect with new people, and finance it all through my music. I also hope I can move out of my parents house & hear my songs in a commercial or something.

Mack: What’s a piece of advice you’d offer to artists just starting out that you wish you knew sooner?

Mia: Listen to your intuition. There’s no formula for success – it looks different for everyone. Don’t work with people for clout – build a foundation of people you trust and respect. Just because someone is successful in the music industry does not mean they’re a good person. I wish I would have viewed successful people more critically, or in the same way I see anyone else, because those people tend to get away with exploitation and aren’t often held accountable. We tend to make excuses for successful people’s behaviors… don’t fall into that trap. And experiment with your music! Don’t box yourself in – express freely.

After finishing this interview, anyone who reads this will not only be impressed with Mia as an artist, but as an overall person and it’s our honor to have her featured on our site today. Mia has an extensive discography of great songs to listen to so make sure you dive in to her stuff (attached below) and show it all some love. The rising star also has a song dropping tomorrow so definitely don’t miss out on that one!

Blessing the page for the first time, I am excited to introduce the world of E.R. to Atlanta-based singer-songwriter and producer, Bri...
Read more

Jackson Lee Morgan isn’t a newcomer to the Early Rising site, in fact, I first wrote about the artist just a month...
Read more
Interviews