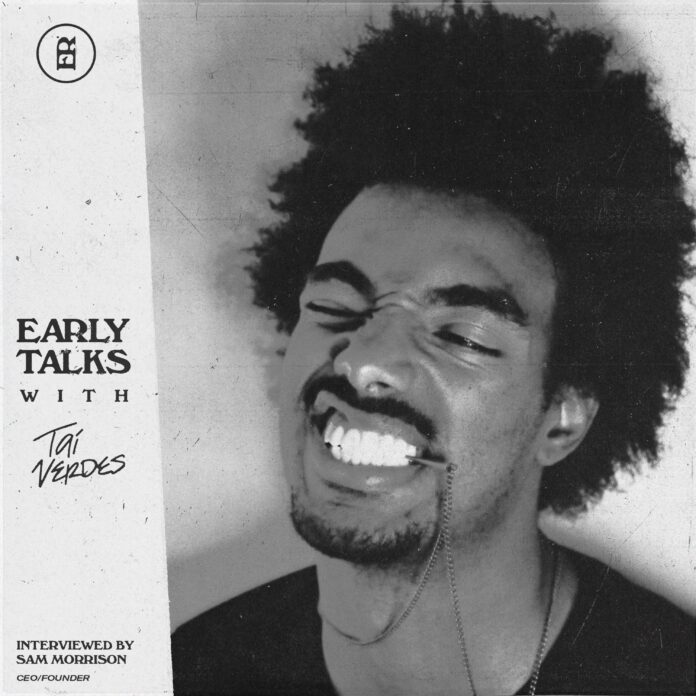 Unless you’ve been living under a rock, then the name Tai Verdes will definitely ring a bell. The Southern California native probably had onne of the most eventful 2020’s after his debut song blew up on Tik-Tok in a scale that is still hard to fathom today. To this day, the track, “Stuck In The Middle” has amassed over 30 million streams alone on Spotify and it doesn’t look like it’s going to be stopping any time soon. The best part about this story is that none of this just happened on accident. The viral success that allowed Tai to quit his job and so music full-time was a product of his hard work and determination to be the best version of himself. If you’ve got some time, scroll on down and read this conversation with Tai Verdes where he took me on a journey explaining this wild year that he had. Enjoy!

Sam: Take me back to the beginning. Tell me about where you grew up; your family background and what started all of what we see now

Tai: I think my whole family was a little bit musical. My mom put my brother and I in piano lessons when we were kids..and she also took them with us just because that was her way of saying, “If I show my kids that I can do it, they can do it as well.” But they actually dropped off after like 3 years of doing it and I just kept going because I liked playing piano at home and my mom saw that I kept playing and she was like okay we’ll put you back into lessons; and I just kept rolling with that but I was also playing basketball at the time. I thought I was going to be in the NBA. Every time I do anything, I think that I’m going to be the biggest or I’m going to get to the pinnacle of the best people. I actually played with Donovan Mitchell so yeah a lot of my friends are in the NBA right now, or at least a lot of my former teammates have at least gotten a shot with the NBA. But once that didn’t work out, I ended up going D3 and messed up my leg, so after that, I realized I didn’t want to do school either and dropped out of Babson College which was an entrepreneurial business school.

Tai: Yeah, it was in Boston man I hated it. It was cold and stupid haha, but I was just salty since I wasn’t having a good time there. But anyways, after I dropped out, I went on a reality TV Show called Are You The One, and after that I won 50 grand on that show and I used it to fund my experience in LA. I was a young kid and I didn’t have enough money to buy anything and didn’t have enough money to really live so I used that to help me out and set up my living expenses as I started to figure out what I wanted to do. I started acting, modeling, stand up comedy; I did a Youtube podcast for a bit. I did influencing. I did Social media deals for brands. So I was kind of interested in knowing how internet people were making money and then because of Quarantine, I saw a video of Harry Styles killing it on Youtube and I was like “I can fucking do this”. So I would get in my car and just practice for an hour and a half every single day for 6 months and the first thing I recorded was “Stuck In The Middle”; It blew up…management came around and it just kind of went crazy after that because people just kept connecting with the song. There were so many trends with the song. People would use it as a background for whatever they were doing that day and yeah it was so cool to see people connect with something that I made…It was just so raw.

Sam: I think the moment that I realized that this was bigger than anything I’ve seen was when I heard my little brother listening to it in his room. I’m like “yo you know this song?” and he was like “yeah bro, this song is sick” and I was laughing because you’re the homie…So its crazy seeing him listen to people that I know. But man, I’d love to hear about what it was like having Ryan reach out and become your manager. Obviously he manages people like Mike Posner, so what was that like?

Tai: Honestly haha I didn’t give a fuck. I didn’t know much about the music industry at all so imagine this random guy named Ryan hitting you up saying, “hey, I want to manage you.” And then at the end, I really respected him for this, he waited til the end of the conversation to let me know that his company has people like Trevor Daniel and Mike Posner, so I was already kind of sold, and then Brandon as well is just a huge piece to all of this. He’s one of my favorite people and just a hard worker. I love that guy. So already having so much faith in my team from the start was just great. I don’t have to think about anything but the art.

Sam: So from that moment of them managing you, have they been another big reason that has contributed to the continued success of your music?

Tai: Yeah, they’re amazing and they just know people and they’re like copies of myself who are out there advocating for me and representing me the way in which I would want to be represented so thats been really impactful. And then with “Drugs”, I don’t think people were expecting me to replicate a moment that was similar to what happened the first time. You see people have one song that goes crazy but to have two songs unless you’re Doja Cat or 24K Golden is crazy. The main reason I put “Drugs” out was because I wanted to make sure people could connect with it. Like I knew that the people who smoke weed would like this song, so as long as those people share it within their community, someone will connect with it. And also, I like the song a lot. My team loved it a lot and out of nowhere people just connected with it again on Tik-Tok. So we’re 2 for 2.

Sam: How has your family been with all of the success? Were they surprised/supportive?

Tai: Honestly, I didn’t really tell them a lot about all of this. I kind of waited for this to get so big to the point that they had to bring it up to me. For the longest time, I’ve been so all talk about everything, so at this point, I was like, if it comes it comes but if it doesn’t it doesn’t; because at that point I was locked up at Verizon already and I was working the 9-5, but yeah I waited until it was big enough and they know now and they’re super positive about.

Sam: How has this experience been with Corona Virus? If it weren’t for the pandemic, you probably would’ve already had a bunch of shows and stuff like that so how has it been blowing up during a time where we’re all pretty distant?

Tai: Honestly, this is the only thing I know, so, it is what it is. I think the best part about blowing up in quarantine was that I got to kind of skip the phase of being an early artist who is putting out music but people don’t quite know about it yet; so I’ll be able to do a show one day and people will already know the words to my song which is super awesome and I’m super appreciative of it. I’ve worked on a bunch of music during quarantine as well, so the whole not being able to see people was good for me. I’m not sure what other artists were doing but the longer we stay in quarantine, the more I’ll just keep grinding on this stuff.

Sam: What is next? What are your working on and what are you excited for in 2021.

Tai: In 2021, I’d love to be able to say that I’ve grown and been proud of the growth. Comparing myself to where I was and what happened last year, I want to have that again but bigger. It’s not about comparing yourself to other people, although that does happen, but as long as you’re getting bigger than you were last year, thats’s what matters to me.

Sam: So last question, I always ask this one..What is some advice that you’d give to an up and coming artist who is trying to make this music stuff work? If you could give younger you any advice, what would it be?

Tai: I’d say, understand what you’re environment is because that’s going to have a heavy duty effect on your art. You should be solid in what you want to do and your environment. The reason why my shit started to pop off was because I has a 9-5 and I would wake up and write music at work. And then I went home. The only thing I was paying for was studio time for myself and figuring out how to find youtube beats. “Stuck In The Middle” was a Youtube beat and it had 1500 plays. People out there don’t realize that if you try something over and over again, theres no way for you to be wrong after a certain point. You can just keep getting better and better, so if anyone wants to start out, it’s okay for you to suck in the beginning. You’re supposed to suck, or else everyone would be doing it and we would have 57 Doja Cats and 100 Ed Sheerans, but that’s not happening. There’s only one Doja Cat and there’s only one Ed Sheeran and there’s only one you, so do your fucking thing and do it as hard as you can.

If you’re a fan of Tai Verdes like we all are, make sure you don’t miss the music video for his latest song “Drugs” that just dropped this week! This guy has a future and it’s a blessing to be able to tell part of the story that will soon be larger than life!

I’ve definitely been diving deep into artists who strive to blur the lines between different genres recently.  I think my initial attraction...
Read more