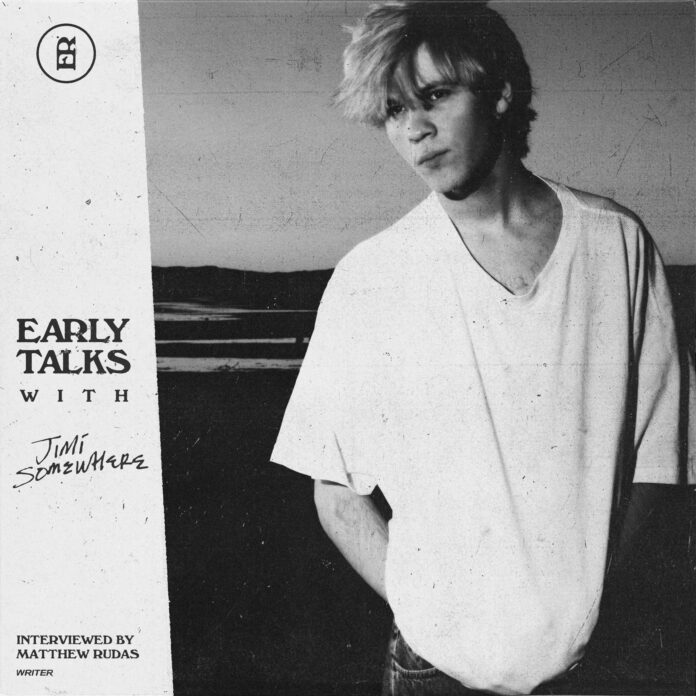 Jimi Somewhere is a 22-year-old indie star from the gorgeous nation of Norway. Already a staple in the indie music community, Jimi has been releasing consistent bangers since 2018. As a complete artist, Jimi has expressed countless devotion to his art via the detail and nuance in each release as well as his appreciation for cinema, poetry, and the work of his contemporaries. His tracks “Never Cared,” “First Place,” and “Puppy Love” drew him great adoration from his peers and fans worldwide. The excitement to his first major release has been building for years at this point and it is finally here. With his newest record, Nothing Gold Can Stay, Jimi brings his most honest, complete, and sonically adventurous record of his young career. Luckily, the bright talent found time in a hectic release week to sit with us here at Early Rising and talk music, movies, Norway, socialized healthcare, and Lil Huddy. Take a look at my conversation with Jimi below!

MR: “Let’s get into it. Let me know everything there is: your name, where you’re from and how you got into music.”

JS: “Yeah, I’m from Norway, I’ve kind of been into music my whole life it’s just always been in my life. There’s an interview with me when I was 10 years old and local newspapers saying I wanted to be an artist. Now, I’m releasing my first album and working on more music as well.”

MR: “I really loved the Ponyboy EP and all of your work building to this, how do you think you’ve grown since those releases and how does it show on this record?”

JS: “I think this will definitely be more defined and I feel like a lot of the songs on here, they’re all kind of songs that were made on the side of these EP’s and loose singles, and every time we felt we hit something that was deeper than an EP or a loosie we put it aside for the album. So, this is kind of the core and most honest and personal songs for us. The songs we felt had the most feeling and represented my most important moments. There’s more real instruments and stuff like that as well.”

MR: “It seems like a lot of your titles are taken from The Outsiders, I was wondering, how did you get so into film and what significance does The Outsiders specifically have to you?”

JS: I don’t know when I really got into film, I think it was high school. I always enjoyed it, but  I really started caring about it and watching a lot of movies in high school. Outside of that, I always felt a kind of connection to [The Outsiders] and the story represented alot of similar emotions to what I was going through. The title, Nothing Gold Can Stay is actually from a Robert Frost poem and I felt like it represented what my music is about. The idea of moments in your life that just become memories and you miss but, nothing gold can stay, everything passes, so you have to appreciate it while it’s there.”

MR: “What was it like making this record during the pandemic? How much of this sound is influenced by what’s going on in the world right now?”

JS: I think with this record there isn’t that much because we finished all the creative work right around when the pandemic started. We got back from LA with the record in early March, right before everything was kind of falling apart. It gave us a lot of time to work and Milo mixed the whole record here in lockdown.”

MR: “Who would you say were your big influences on this record? What were you listening to that inspired the sounds?”

JS: I think it was a lot of early Coldplay that we really really love. Also, there’s like Phoebe Bridgers who we listened to a lot. I love Childish Gambino and I grew up on Because the Internet so that’s always been important to me. Also, Kanye and his albums are always there for some sort of reference here or there, just how he works. It’s kind of scattered all over the place, trying to take every single influence and put it in, like going through the blender. That’s just how I and Milo do it, then see what kind of result there is.”

MR: “What do you really hope people know when they go into this record?”

JS: “I think you learn a lot about me when you listen to this record so maybe just listen and see what you’re left with. A good friend of ours who I sent the album to early, said that he felt like with a good album you’re supposed to get to know the artist and he said he really got to know me [through the record.] Just know we’re putting our whole soul, blood, sweat, and tear into this and it’s not something we just whipped up. It’s not a collection of songs we did, I think of it as a real body of work we put a lot of care into. There are lots of transitions and other stuff throughout that is really meant to be listened to closely.”

JS: I hope I still feel like we just did exactly what we wanted to do and that it still feels like I can listen to it and see myself during that age and how I felt. I hope it’s not affected by like trends and wanting to please this person or that person, just that it was us. I still hope it feels like this was just the purest form of me and Milo. Hopefully, it’ll be a good memory, something to run back still after 10 years.”

MR: “Time for some fun questions, what is it like to live in a country with socialized healthcare?”

JS: “Crazy question, yeah, I mean I grew up with it so at first I just thought that’s how it is. I’m learning that that’s not the norm even in the US. I can’t believe there’s a discussion about whether or not we should have healthcare, it’s crazy because it feels like such a basic human right to be able to go to the hospital and not pay your life savings. So, I guess it is awesome but bittersweet because the whole world should have access to something like this. Hopefully, we can be an example of, like, yes this is possible, it isn’t a magic trick.”

MR: “If anyone is visiting Norway, what are three spots you recommend?”

JS: “I think everybody should go to like anywhere in northern Norway. There’s also a city on the coast called Bergen, it’s like Norway’s Paris and it’s a really beautiful city. If you go there in the summer there’s like a midnight sun so the sun never sets. It’s a really sweet city where people are more open and welcoming. There are these beautiful mountains in the middle of Norway, just walking there, it feels so apocalyptic.”

MR: “Now, if you were ever stuck on an island and you could bring one record, one movie, and one item of your choice what would they be? Oh, and you somehow have a way to listen to the record and watch the movie.”

JS: “Okay I think I’d bring Her. And then, for the albums, I might just bring my own album. Wait no, that might be narcissistic but I feel like it makes sense, actually, if I’m alone I don’t think I’d want to listen to myself. I’d bring I’m Wide Awake it’s Morning by Bright Eyes, it’s a fun one. And for my last item, maybe a guitar just something I can still write with and make melodies with. I feel like writing is such an important part of me, and if I’m stuck on an island I feel like I need to get my thoughts out.”

MR: “Last question, how honored are you to be played on the radio right before the 21st-century vamp, Lil Huddy?”

JS: “Amazing, yeah I feel amazing. Just even being mentioned in the same sentence feels validating, it feels really good. Hopefully, he was listening too and he liked my song. Maybe we can cook something up, maybe there’s a collab album on the way. You never know, you never know.”

Jimi’s album drops tomorrow, but if you’re like us and can’t wait until then, stream his latest song down below! Make sure you familiarize yourself with this amazing talent as he is definitely paving his way into a stellar career!

Most of the time when life is go, go, go, we’re able to keep our focus on what’s in front of us,...
Read more

Aliff Rush has complemented the release of his recent single, “Top House,” with a visual aid that embodies the essence of the...
Read more
Interviews