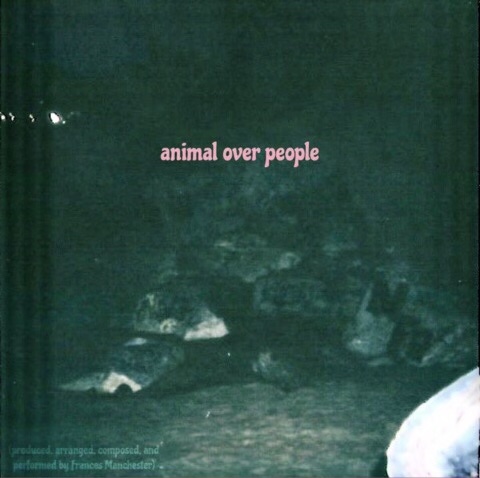 On February 5th, the world officially welcomed Animals Over People with his debut record, a self-titled five-track EP, “Animals Over People.” The project is mixed, mastered, written, and produced by Ace Correa, who set out to complete his journey of entirely owning a record, creating a sound that was uniquely his own with instrumentation all carried out on his own behalf, the end result is a taste of whimsical bedroom-style psychedelia. Since 2018, Ace has been releasing demos and records on Soundcloud, experimenting with hip-hop, metal, rock, punk, math-rock, all culminating in the eclectic nature of his initial release.

The track is a product of its time, from a quarantined bedroom post-breakup, the young talent found himself funneling bits of himself into the somber and underplayed 15-minute record. The project from top to bottom is raw, vulnerable, and full of clashing soundscapes of wondrous feels. Ace elaborated on the feeling of the record and mind state he was in while writing it:

“Going into this project, I had a completely different vision than what I ended up with. During this time is when I had my world shaken up by a rough and painful breakup which left me feeling completely lost and disconnected from the person I thought I was. I struggled to cope and focus on my music for a few weeks…It was a moment for me to step back and remind myself that music is who I was and who I want to be forever. I could lose everything in life but at my core, I will always be a musician and an artist and nothing can take that away.”

From the record’s onset, there is a strong emphasis on the more psychedelic nature of Animals Over People, the trio of “Frances Manchester & Her Tree Hugger Friends,” “Pretty Faces Down in Their Libido,” and “Homesick (A Shade of Blue)” do a masterful job of world-building and welcoming the listener into the sonic headspace the record calls home. The keys, synths, bells, light percussion and subtle guitar on “Pretty Faces Down in Their Libido” serve as an excellent backing track for a moment of free verse poetry. For the vocals, there are layers of drowned-out and fading takes, culminating in a sensation of ambient freefalling.

The record kicks into a new space on the record, “Genesis / Best Friend” a more upbeat instrumental cut inspired by the guitar stylings of Yvette Young and Ichika Nito. Subtle and stripped, the record hovers around a killer guitar riff and complimented by the occasional underlying atmospheric synth. Although just an instrumental track, “Genesis / Best Friend” delivers a story of friendship and the constantly evolving state of it. As the track reaches its end, the guitar melody falls into a gloomy yet gorgeous sequence before hitting the intro riff once more. In its entirety, the ability of Animals Over People to capture feeling with just an electric guitar and great playing is an ode to his inert musicality.

Finally, the record concludes with a dark and moody folk-styled track. Over a bouncing acoustic guitar “Underneath the Skin” reintroduces the psychedelic nature of the project with panning vocals, washed-out layers, and a final fade into silence. A perfect bow on the record, Animals Over People concludes with a feeling of wonder, concluding the vastly unique, tasteful, and progressive record with the same sentiment it opened with, whimsical and thought-provoking. An ode to experimentation, challenging oneself, and using art as a medium for true expression is evident throughout the record, make sure to check out and be excited for the future of Animals Over People.