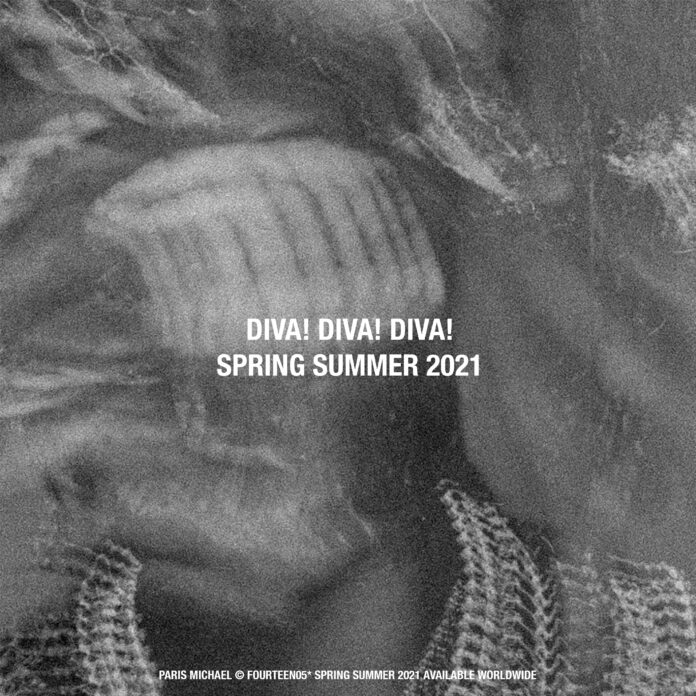 High fashion and high energy go hand in hand in Paris Michael’s project DIVA! DIVA! DIVA! Premiering today on Early Rising, it listens with a vision. In a place where fashion and music share common ground, DIVA! DIVA! DIVA! lands on those same stages that have envisioned change and set influence in motion.

Modeled after the fashion show infrastructure, it pulls you into every song’s dynamic. Where one song leans, the next rocks, bringing the listener to the front row of his show. Created to stimulate, it is intriguing, dramatic, and thrilling. Electric with energy and dripping in designer, this project is Paris Michael’s world and we’re all just living in it.

Read my conversation below with Paris Michael on his inspiration and the creative process for DIVA! DIVA! DIVA!

Lily: How did you get into music? Where did the inspiration come from to start creating?

Paris Michael: I’ve been wanting to make music since I was six. My dad would print out lyrics for rap songs and I would sing along to them in the car. When I was seventeen, I actually stole my mom’s podcast equipment. I used her laptop and started rapping over Youtube beats. Three years ago, I met my producer Justin and ever since then we’ve been trying to hone this sound, and it’s been a lot of trial and error. Last January was when it really started clicking.

Lily: Were you going for a certain sound or following the feeling of what felt right to you in the moment?

Paris Michael: Our thesis as of right now is to mix punk, rock, and hip-hop perfectly. The first two years was a lot of trying to figure out how to do that without it being corny or sounding too much like other people. It was figuring out what’s going to make people listen to us. The first year was a lot of imitation, the next year was learning how we can make sounds our own, and then last year it finally just clicked out of nowhere and it’s been seamless since then.

Lily: It seems like finding a sound and making it your own is much easier said than done. It can be a really cool process when you can own what you’re doing as who you are. Is this project your intro to stating this is what I am?

Paris Michael: The last project was very much introductory, where it was almost just like here are six songs, this is what we’re about, and this is what we can do. This one is more a fully cohesive project and shows that we can make something of that scope. We did the project with just me, Justin, and the producer Junius, Steven, and the mix engineer, that was the whole team creatively. There are no features, there was no outsourcing for beats. It was just us in a room for five months working.

Lily:  Sometimes the creative process, when there are many people in the room, can get watered down. There’s a belief that keeping the circle small helps.

Paris Michael: It took so long to get the sound right. Junius and I are one mind most times. Obviously, in the future we’d love to work with other producers, but right now it was very important to us to keep it personal especially in the beginning stages because no one knows who we are yet. It would be weird to have 80 people in the room. It’s then about who’s on the song, who did the drums, but when it’s just Junius and I it’s like we’re a band. It’s easier to show who we are, when it’s just us in the room.

Lily: I’m interested to know more about your acting. It was a big part of you as a student. How is your background somewhat being projected into this music?

Paris Michael: I went to the Chicago High School for the Arts because I wanted to be an actor. When I got to NYU, I did a year of acting and hated it. I don’t think it was the acting per se, but the program itself made me realize I didn’t really love it. I tried to transfer to their recorded music program and got rejected. So, I applied to create my major. I wanted to study the business behind global icons where there’d be fashion marketing, design, and recorded music. They said no, so I dropped out. I then worked as a stylist at Acne Studios and got to work with really cool people. Fashion and music are the influences that shaped who I am as an artist. The acting just makes me a little more ostentatious with putting on a show.

Lily: There’s obviously been a long alliance between music and fashion. For this project, what’s so important that listeners need to view it this way?

Paris Michael: In high school, I listened to A$AP Rocky rap about clothes or saw pictures of Kanye backstage with Margiela. When I started making music seriously, I wanted to do full integration. We take these influences and touch on them, but we don’t immerse ourselves in the world. I wanted to treat Paris Michael as a fashion house, but we don’t make clothes we make music. Our whole motif is instead of just adding a guitar here and there, we’re going to really study the melodies of rock and hip-hop music. This project’s whole theme is runway so that’s the image we wanted to capture. We’re a fashion house and we wanted to put on an auditory show.

Lily: You’re wanting to give listeners an experience in a time where they’ve been altered. I see there are elements of darkness and beauty in the project. Did the concept of glamour stem from fashion alone?

Paris Michael: I have this obsession with becoming the music. On the Yeezus tour, I remember seeing Kanye West wear the diamond Margiela mask. He got on stage and he wasn’t even showing his face. I thought that was the coolest thing ever; to literally become what your album is about. There used to be full album experiences, full immersion. There were all these elements that put you into the world. We don’t want to just be here for a couple of years, we want to be legends so you have to put your best foot forward.

Lily: I think integrating this experience driven mindset from the beginning will be interesting to see how your next projects look. When you say you want to become the music, do you see your persona changing with your albums?

Paris Michael: I think persona I’m always an artist, but I know for each project we pull different influences. For this project, we watched the Rick Owens Spring Summer 2018 show on loop because that’s the energy we wanted the project to have. I would put it on my laptop and just play it while we were working. I even wore all Rick Owens to every studio session. I’m actually wearing the fit right now. I don’t know if the persona changes, but the theme for each project ebbs and flows, so it stays in the same house.

Lily: This project feels very intentional with the plan and energy you wanted to emanate. Was this something you had in the works for a while?

Paris Michael: Most of my ideas came from quarantine because I really had to sit, reflect, and grow as a person and artist. All the themes come prior but the songs are subconscious in a way. I’d like to say that I had everything planned out, but most of it is me just writing. I won’t know where the rhymes or metaphors will come from but I’ll listen later and realize what I meant. It feels like a stream of consciousness. The song “Rick Owens Receipts” none of us remember making that beat. No one remembers who chopped the vocal samples at the end or who wrote the melody. It really speaks to the music not being the thing I do. It’s not a stagnant thing that I just add my own flavor to, the music and I both work on each other. I think music works in tandem with us.

Lily: I hear a lot of people say “I’m working on music” but you said music works on you. How has this music impacted you?

Paris Michael: From a creative standpoint, when we were working on “Lightspeed,” we listened to a lot of Aphex Twin. We thought it would be cool to have a rap over the style of his instrumental beats. It forced me to write better because I’ve never written with that drum pattern or melody. It made me think about how to do something I’ve never done before. As a person, music has taught me patience and a little bit of arrogance as well. We go through life trying to be as humble as possible, but life is so short. I spent so much time not telling people I rapped because every guy is a rapper. Sometimes the industry gets crowded because everybody wants to do what the other person is doing. It’s such a cliche but it really taught me to just be you.

Lily: Sometimes trends can be a distraction because of how temporary they are. It can be a challenge to balance those influences with lifelong ones.

Paris Michael: One of our biggest challenges in the very beginning was we kept trying to make what our biggest influences were making. It doesn’t make sense to try and be Travis Scott or Prince when those people already exist. If people want something like Kanye West, they’re just going to go listen to Kanye West. I can’t be A$AP Rocky or Tame Impala. Why would I try to make their music when I can only be me?

Lily: It’s hard to coexist with the people who have been the best at their own game. I also think listeners tend to weed out what’s not authentic.

Paris Michael: In 2017 people were saying mumble rap is going to ruin hip-hop and I remember thinking to just wait because it’s a trend and the real artists will survive. All the artists with individuality and talent from that 2016 class like Lil Uzi Vert and Denzel Curry have just gotten even bigger. They have their own lane and identity. There’s no reason to get upset with trends because the authentic artists will always survive and break through the noise.

This project is already one of my favorites this year and I hope you enjoy listening to it as much as I do. Watch the video and stream DIVA! DIVA! DIVA! below.

Barely legal are so cool. They’re outta Tampa, Florida which I’ve found to be a hotspot for not only great but innovative...
Read more
Home FeatureReviewsPremieres