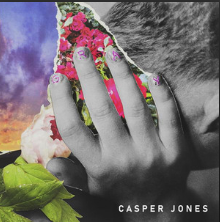 I’ve definitely been diving deep into artists who strive to blur the lines between different genres recently.  I think my initial attraction to this new wave is the doors that open in terms of creativity once a musician ventures outside of the confines of a specific genre.  By fusing so many different styles and sounds into a single piece, this new wave of musicians is actively changing the way that music is created, consumed, and appreciated without having to abide by societal expectations.

One artist who embodies this young spirit is Casper Jones, a New York-based singer/songwriter/producer who is pioneering a unique brand of soulful music that I truly can’t describe with a single word.  Jones fuses pop, R&B, hip-hop, soul, and alternative to create something unlike anything I’ve ever heard before.  The new video for “Ghost Town,” a track he dropped in 2020, releases today and it perfectly embodies his unpredictable, yet tasteful style and demeanor.

Looking at the video in its entirety, director Denzel Deranamie and producer Auriana Woods create scenes that make me question the exact time period that the video is set in.  Deranmie and Woods also establish a sense of confusion between imagination and reality.  The opening scene focuses on a lone doorway in the middle of the forest, similar to that in Narnia, with Jones walking towards it, seemingly going through and popping out in a fantasy world on the other side.  This utopia includes empty, lush fields and everything else you might imagine in what appears to be the east coast countryside. Other fantastical and visually appealing elements like a shower in the middle of a field appear throughout and continuously push the viewer to question if these scenes are real or a figment of his/her imagination.

These shots of Jones in the outdoors cut in and out blending with scenes depicting him dressed as a 1920’s businessman sitting in front of a typewriter, cigarette and booze in hand, talking on an old rotary phone.  Although I’m still trying to figure out the connection between these two scenes, the overall final product is incredible.  By far, my favorite aspect of the video is the manipulation of color.  Everything looks so bright and vibrant, however, the video looks as though it was shot on a super8.  With so many twists, turns, and unanswered questions hanging in the balance, the only thing you can do is watch it for yourself! If you answered any of mine, please reach out and let me know, I’d love to understand the full story behind this timeless piece of art.

Check out the video below and follow Casper Jones as he begins a year chocked-full of new music.

Miami natives, The Polar Boys, have been creating a buzz within music since their 2021 comeback. They kicked off the year with...
Read more
ReviewsRising ReleaseSongs