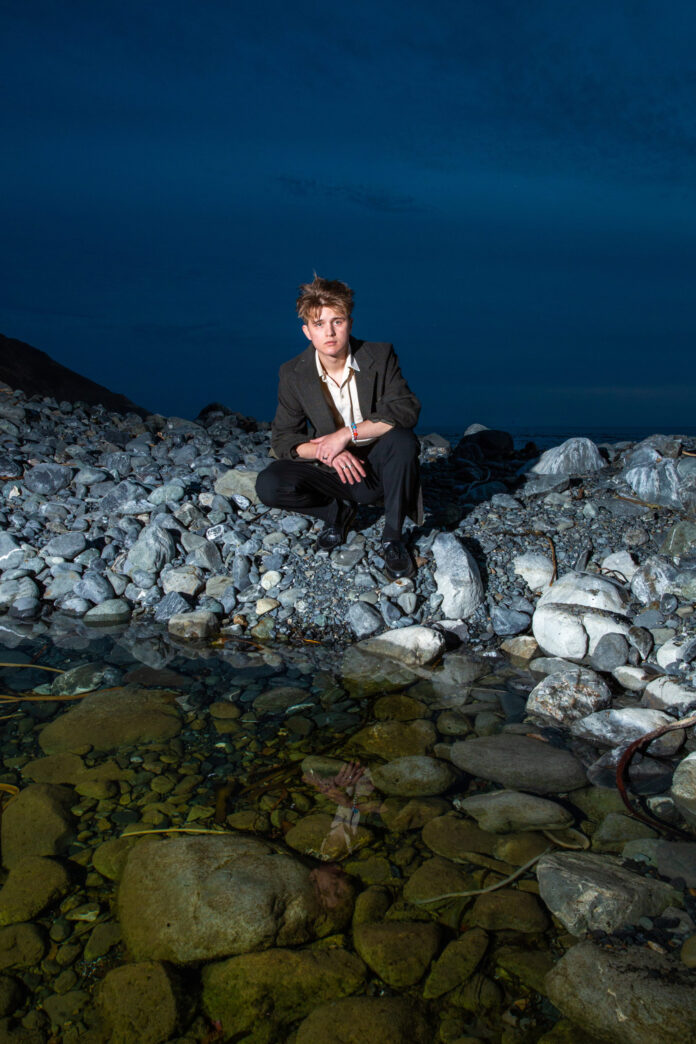 From dulcet notes, to exuberant visuals, John-Robert is an artist that takes ahold of the reins to his creative vision. With his latest release, “Damn Bean,” audiences will be captivated with both the track, as well as the accompanying music video. Truly incomparable, John-Robert is paving his own road. Sit back and get to know John-Robert better, both as a person, and as a musician, with this new Q&A.

Meghan: For our readers who are unfamiliar with the gem that is John-Robert, introduce yourself, age, where you’re from, what got you interested in music.

John-Robert: Hello, I’m John-Robert, I’m roughly 20 years old, and I grew up in a small town in the Shenandoah Valley of Virginia. I spent a lot of time outdoors lighting stuff on fire, playing backyard football, shooting b-b guns, that sort of thing. There was enough to do where you could enjoy moments with your friends, but not enough where you could totally escape boredom. You had to find your own form of entertainment and that’s what led me towards getting into music.

Meghan: Is there a song/album/body of work you remember hearing as a kid that has stuck with you up until now that you still think about, or that inspires you?

John-Robert: My father would adopt a CD for 3 months at a time and we would drive everywhere with him. One of the biggest records he played was Queen “Greatest Hits”. Hearing that vocal elasticity, the backup vocal arrangements…I truly admired those songs for how unique and well structured they were.

Meghan: What was the driving force behind “Damn Bean?” How did that song come to be, and what does that song mean to you?

John-Robert: I was falling hard for a person and then our conversations started getting fewer and far between. I realized I was being led on and in that moment I started running outside in the rain, I questioned my self worth, and I felt expendable. I’m a non-confrontational person, but I felt like I still needed to tell someone about my situation, so I decided to put it into lyrics and melody. That way I could take my feelings and put them into something productive, and also get the situation off my chest.

Meghan: The video for “Damn Bean” is something most people wouldn’t have thought of. When did that video treatment come into your mind?

John-Robert: The original idea came from a concept that I wrote for a video when I was 18. When pitching this treatment I wanted to come up with a loveable character that only spoke through their mannerisms. A character that was misunderstood and misjudged, but overall had a big heart. I thought that a submissive was a great metaphor to represent the way I felt after the breakup and hearing the news that she had found somebody else.

Meghan: What pushes you to create? What drives you as an artist?

John-Robert: Creating music brings me a great sense of  purpose. I don’t know what else I would do. I’m inspired by emotions that feel too complicated to put into words and feelings that seem too big for myself to comprehend. It’s my way to deal with things that can’t be left unsaid, but also can’t be explained through any other medium.

Meghan: For anyone interested in pursuing music, what would you say to them?

John-Robert: Write about what you know. Don’t try to be anything you’re not, authenticity is key. Your stuff is going to sound like shit at first, but you have to write the bad songs to get to the good ones. You’ll learn along the way that you’re more capable than you initially thought.

Meghan: What do you hope people take away from listening to your music?

John-Robert: I never write music with the intention that someone will take something away from it, it’s more so that I have something I need to get off my chest, and it’s a side of me that I want to be able to explore in a safe space. My favorite thing when I do shows is how people tell me they relate to the lyrics in a way that’s specific to them. It inspires people to be more vulnerable in conversation…that’s one of the best parts about performing live.

John-Robert paints a striking picture with his work. Audacious with his music, John-Robert is an artist to keep an eye on. Check out “Damn Bean” down below!

Miami natives, The Polar Boys, have been creating a buzz within music since their 2021 comeback. They kicked off the year with...
Read more
Home FeatureReviewsQ&A