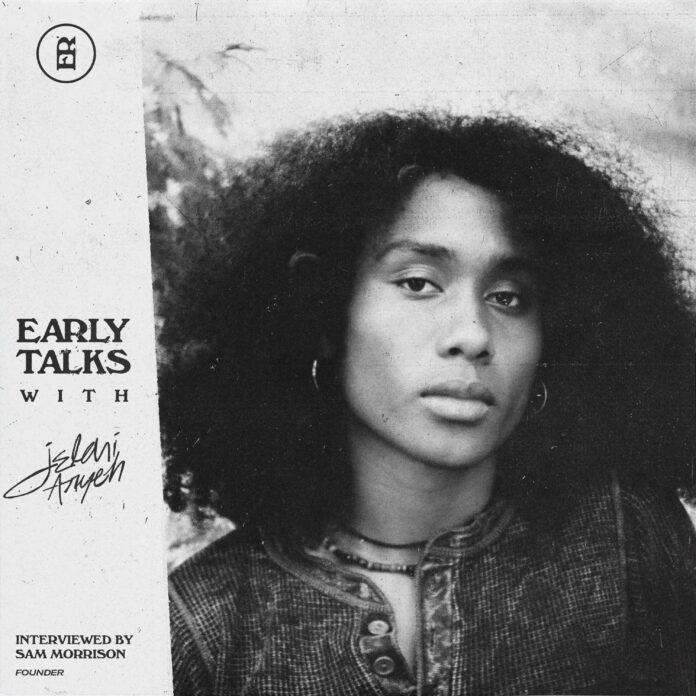 San Diego artist, Jelani Aryeh has slowly become a household name since stepping on the scene back in 2017. If you’ve seen him, then odds are he’s left a lasting impression with his forward thinking style and long flowing hair. To use the word “icon” to describe Jelani would be an understatement as he truly doesn’t fall into a specific category; but in every sense of the phrase, blazes his own path wherever he goes. After 3 years of stellar release after stellar release, the Southern California native is finally coming into his own as a person and an artist in the most amazing ways. With the recent release of his brand new song, “Marigold”, I felt like now was the perfect time to catch up with the super star and hear about everything that’s been going on in his life. If you’re a fan of good music and good people, make sure to read the latest installment of the Early Talks Interview series with Jelani Aryeh!

Sam: Before we hop in to all of this, I have to ask, how is life treating you? What’s good with you these days?

Jelani: It’s been good! I’ve been riding the waves of the “Marigold” release and I just started going back outside and hanging out with friends and that’s just been wholesome. Other than that, just been chilling in my room, consuming a bunch of movies..more music. And getting more into rap too. I’ve been listening to Guapdad and getting into Freddie Gibbs’ projects. But yeah, I’ve really just been chilling and finishing up the art direction for the album!

Sam: Well man, when I conduct these interviews, I like to make them more like a conversation rather than a Q&A, so if you’re down to just dive into this and go down memory lane with me, let’s do it; So, tell me what was your first experience with music and what was your upbringing like?

Jelani: Okay, so I remember it was back in 2004 to like 2006. I’d be on the way to football practice and we’d be in my dad’s S-type Jag playing Kanye; College Dropout and Graduation. And for some reason, that era, I just remember playing football and it brings me back to that time. That was the first time music made me feel something and took me somewhere else. That was the spark. My dad would just always play Jay and Ye and a bunch of the classics. Pac is his favorite. He got a new Benz and he’d play “All Eyez on Me”. Yeah, it’s always been around. My uncle was a rapper; they would record in the room next to me, which is my brother’s room now, but they had their own label called REA entertainment which is crazy. They were running that for a while, but I just remember sitting in there all the time as a 5-year-old. Never thinking that I would do this, but it was cool soaking it all in.

Sam: So do you think you being surrounded around that music played a huge role into you being a musician now? Because, I want to make sure that my kids at least appreciate music.

Jelani: I think so. Yeah, not even consciously knowing that then, but something about those songs being played lit a spark for the future. But yeah, when you surround your kid with stuff that you like and tell them all the stuff about it and how it makes you feel, that could be impactful.

Sam: You mentioned football a little bit ago, so what were some other things that you loved outside of football? If you didn’t end up doing music, what would your life look like now as far as your interests and your career path?

Jelani: So I was always on Youtube and always creating something and crafting things. I just loved doing things with my hands and drawing. I made a Youtube channel for each kind of phase I was into. If I weren’t to do music or football, it would’ve been something in the creative field. I don’t know what that would be. Sculptures are cool and I really like architecture but that takes being good at math and going to school. But yea, Architecture and interior design are really awesome to me.

Sam: Okay, so tell me what it was like figuring out that you could sing?

Jelani: Yeah, I remember being in Middle School, listening to Channel Orange and just singing “Thinkin Bout You” and being able to hit the falsetto and now I can’t; It just doesn’t hit the same. Then I knew, I could kind of sing. I would always sing along to the radio songs that my auntie would be playing, but in Middle School was when it all started.

Sam: Amazing, so were you singing around people or was this something you kept private?

Sam: So, what changed after that? You’re killing it now and making and impact, so when was the moment that you went from keeping this a secret to really deciding to pursue this as a career?

Jelani: I think it was when I made “Where We Go”, and that was after I told my dad that I no longer wanted to play football. And he was like, “son, I’m not going to look at you the same”, and he’s my best friend. I can go to him for anything, so when he said that, I had all of these feelings and didn’t know where to put them so, I just sang them in a song. and once I saw the reception of that and saw how that story could help other people in their own way, I was like, I have to do this.

Sam: So from that song, what was the progression like from the beginning of your career to where you’re at now?

Sam: Thats an awesome answer…Now, I’d love to hear about your squad; your group of friends, becuase I can just tell that ya’ll have built such a close knit family relationship. How have they played a role in your development as an artist and as a person?

Jelani: Sure, yeah, those are my brothers first and foremost; but it’s really God, how we came to meet and I alwasy say it’s divine timing/intervention. I met Jasper Typical at Comic Con and we were both at a Tyler The Creator Panel and I recognized him, because he was on some Kevin Abstract show and we just linked after that and he joined the group. And Troi and I had a similar upbringing as me with football and then going into music; And Gidi came from Baltimore and saw the Pigeons and Planes thing and we just connected. Asha is somehow my cousin in some way, but I just thought he was dope because he just looked dope. I’m not even sure if I knew his music, I just wanted to be friends with him. But, yeah those guys, we just push each other and know the potential and greatness that each of us holds. And when one of us isn’t living up to it, they’ll check you.

Sam: Accountability & Community are huge in any industry, so I love that. Switching gears for a second. Tell me about this recent song, “Marigold”. I love hearing about creative processes, so tell me what it means to you and how you want people to receive this song, since it’s already out.

Jelani: Yeah, so it really stemmed from my name, which means Mighty Lion. Jelani means “Mighty” in Swahili and Aryeh means “Lion” in Hebrew. And I was doing some research on the Marigold flowers and their nicknames are literally, “little lions”. I was like oh shoot, and I was also listening to some psych rock and a lot of the imagery and subject matter was talking about the sun and light and love, so I was just trying to bridge the gap and make it a song about the sun god and also talking to myself and the aspect of who I want to be; But, for people, I want it to fill them with Sertonin and light and not allow them to have any room to be sad or gloomy. Yeah, I feel like during the pandemic, people (including myself) have become super okay with just staying in their room and not leaving at all. So, with this song, I just wanted to bring the outside in and paint a picture that people could live in.

Sam: With that, how did the pandemic affect you as a person?

Jelani: I feel like I’ve grown a lot in some ways, but also fell back into some old ways, but it’s been for the most part, very beneficial. Because during the first leg of it, I never had that time with family. It felt different. We would have deep conversations with each other and it’s given me the most time for reflection and I feel like I was already a quiet person, because I graduated High School a little early and would make music and just keep to myself, so that in a way made me more introverted and the pandemic just added on to that and it taught me that I want to be more outward and talk to more people and have real conversations.

Sam: And that means a lot to me man. Thank you for even having this conversation with me and taking the time to talk about all of this…But, last question for you…If you could go back in time and encourage yourself and maybe even young artists out there right now, what would you want to tell yourself then, that you know now?

Jelani: Definitely create from your heart; or if you have that urge to create, act on it. Don’t be worried about what people are going to say, because if you have that feeling, you were given it for a reason.

Jelani just released an amazing track called, “Marigold” and it is more than worth your time this afternoon! I’ve attached the Spotify link down below, so give this one a listen and make sure you stay up to date with every single future release! Enjoy!

Miami natives, The Polar Boys, have been creating a buzz within music since their 2021 comeback. They kicked off the year with...
Read more
Interviews