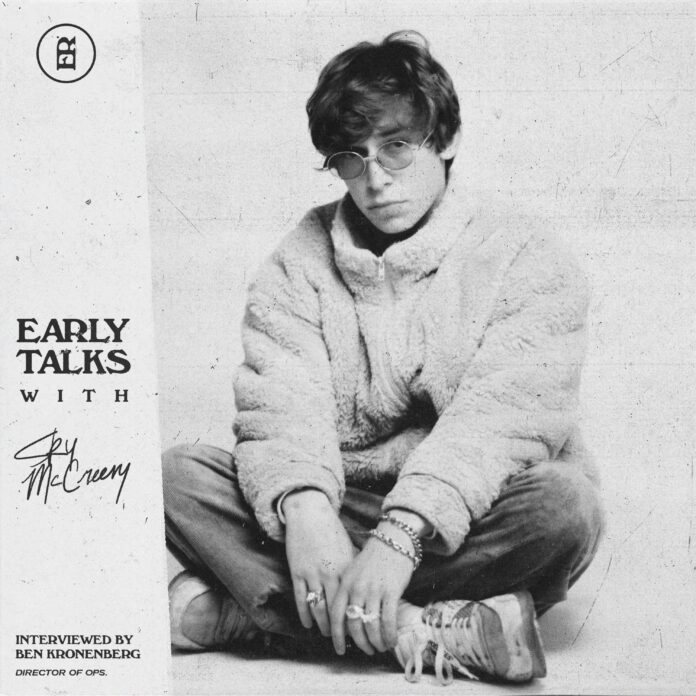 A few weeks ago, Early Rising caught up with Los Angeles-born and bred Sky McCreery.  The nineteen-year-old singer/songwriter/producer who is carving out his own space within modern pop music.  Unlike most songwriters and artists that I’ve come across thus far, Sky’s ability to tap into, and display his emotions is second-to-none.  With such an uncanny ability to communicate exactly how he’s feeling, it’s impossible not to love this burgeoning star.  2021 is going to be McCreery’s biggest year to-date and it’s only fitting to learn everything about him before you see him perform live later this year!

Check out the full interview with McCreery below and make sure to keep your ears peeled for what he has in store.

First off, tell me about your journey to where you are now.  When did you start making music? And what has the road looked like from your eyes?

The journey has been pretty crazy and pretty amazing at the same time.  I really started taking music seriously around freshman year of high school. Before that, I’d always been writing songs, and I took piano lessons for about seven years prior. But then I got to a point where I left my old school, unfortunately, I actually got kicked out of there. I got put into this new school and I saw it as a huge chance to do what I wanted to do, and take advantage of the opportunity to follow my music.  So I just dove into music and production, and spent a lot of time finding my sound. I ended up with my first EP, a four song project called Anti-Climactic Love, which is on Spotify and all that.  It was my first project to ever go on to DSPs so it was definitely a big moment for me. I used to just put music on SoundCloud, and it was very balad-y type music, not a lot of production was put into it. So that EP was a huge stepping stone for me, I’ll always cherish that project.

Was there ever an aha moment where you realized that music was becoming more than just a hobby? When did things start to take off for you?

I’d say there’s a two part answer to this question. The first part is more of an emotional reason, which is based off of receiving messages from fans or even just supporters or people that listen to my music and listening to them tell me that it’s impacted them, and that it’s even saved their lives in some cases. And that, to me, is not only motivating, but it’s also incredibly humbling. That just means everything to me. Realizing that what you love and your passion is actually saving people and helping them, I think that’s just beautiful. And the other part to that question, I’d say, when I started to realize that this is starting to take off and become an actual career. A couple of years ago, I posted a cover to this song called “If You Leave,” which no one had really heard of, and it was just on SoundCloud. I came across this song when it had like 100 plays. Literally no one had heard the song. It was a completely random song and I just thought that it was so beautiful. It was one of the most beautiful songs I’d ever heard. So I made a cover of that and it found its way to TikTok. I didn’t know about it at all, but it started to blow up.  There were hundreds of  thousands of videos being made.  People were making remixes of my cover like being slowing down or like the pitch being lowered. It was crazy I went up like 100,000 followers in a single day.

Who are your all-time favorite artists?

I know a lot of people have mixed feelings about Coldplay, but I love Coldplay, and they’ve honestly probably been one of the main influences on me just growing up. When I was younger, I listened to a lot of their old albums, I honestly listened to everything from them. Also John Mayer and The Beatles. I’d say right now, in the modern era, one of my favorites is Still Woozy. I think he’s brilliant. His sound is so unique and he’s honestly just super inspiring to me.

Who are some of your dream collabs? – also, seeing that you haven’t really collaborated with any artists or producers in the past, is this something that you see coming in the future?

I definitely do and I’m really excited to be collaborating with other artists, it’s going to be awesome. I think I’ve been more on the side of discovering myself and my artistry first before I dive into adding features or collaborating. I’m really excited to start collaborating with an artist by the name of Lou Val. We’re working on a song right now actually. I think it’s going to be awesome. But yeah, on top of that, there’s a few artists, up-and-coming and rising artists, that inspire me. I’m really inspired by up-and-coming artists, especially young artists, and also artists that produce their own music and all that stuff. I think it’s all just super authentic and I love it.

I absolutely love the production style that you incorporate in all of your music.  The early electronic fan in me gets beyond excited when I hear all of the small details that make your music uniquely you.  How would you describe your production style and the process that goes into it?

If I were to describe my production style, I feel like the word that I would just describe it as real and authentic. I know that sounds really cliche, but to be completely honest, my music just always comes from a very real and authentic place. I don’t necessarily know what something’s going to sound like when going into it. I usually find my way and allow sounds and instruments to lead me to what something is going to sound like. But yeah, it’s very experimental for me. I’m not the best producer by any means and I’m not even close to where I want to be. I’m sure I’m going to grow so much over time but right now, it just involves sitting down and thinking of a melody. That’s about it.

Walk me through your creative process.

Well, I try to write something new every day. So obviously, I wake up feeling different every day. Whether that’s because I had a shitty dream or it’s just a stressful day, everything is different.   I’d say the creative process is different every time. Sometimes I’ll start with a chord progression that I think is super beautiful. Another time I might just be seeing this random melody in my head, and once I finally get the perfect hook, I’ll run to my room to record it in my voice memos. After that, I’ll hop on the keys and find the corporation that’s gonna fit it best. But honestly,  I don’t know. It’s always different and I never really follow a specific guideline or structure.

So you have a new single titled “I looked into Your Eyes” coming out soon.  Tell me a little about that.  What should fans be expecting to see with this upcoming release?

Yeah. I’m really excited about it.  I think this song is different from the music that I’ve been releasing on Spotify recently and all that shit I used to put on SoundCloud. I used to do ballads a lot and so it was nice to revisit that side of my music–I feel like it’s a side of me that I might need to dive back into again. Overall, “I Looked Into Your Eyes” is such a beautiful song and I really think it’s going to resonate with a lot of people. For all the listeners, I would just say go into it with an open mind. It’s definitely pretty depressing and it makes me a little sad. But you know what, it’s important that I can translate my emotions and my feelings through my music.  Even though this song was hard to write and it was hard to translate all of those emotions into a song, it’s going to be out there forever and that’s crucial for me to grow as a person and a musician.  The process really helps me move on and grow.

What are your plans post-covid?

I am hoping to get on the road and start performing.  I really want to start meeting my supporters and fans and listeners. Meeting fans and being able to have  a solo show–to be performing my own music live–because I’ve never performed for myself or for my music at all throughout this entire musical journey, those are the two moments that I’m most excited for.

What are pieces of advice that you would give to young artists coming up right now?

I would say to take time and don’t rush into anything. Take the time to get into production and get your music to a place that when people hear it, they’ll resonate with it because it’s authentic, and it’s from you. If you just spend a little time, just writing songs and getting to know yourself as an artist, which I’m still doing, you’ll start down the right path. I don’t think I’m going to figure out who I really am as an artist for a while. But I think that it’s super important to spend the time with yourself even in just making music and not releasing anything, but kind of gathering up a repertoire or a collection of just music that kind of describes you and your artistry.

This is one of the best interviews I’ve ever gotten the honor to be a part of. Sky McCreery is an incredible musician with a bright future, but he’s an even better human being. Check out his music below and make sure to connect with him on Instagram! Tons of exciting music dropping soon!

Georgee is an artist who not many people know about now, but by the end of this week, I predict that will...
Read more
Home FeatureInterviews