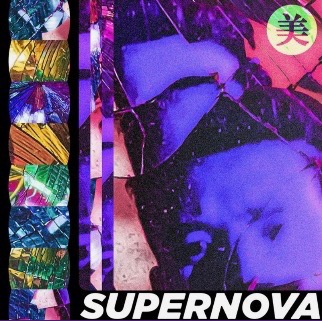 Mei is an artist I have been passionate about since I was first introduced a few months ago. There are only a few young talents so determined to capture a cohesive message and craft an emotional statement. Mei, an artist from Chicago at only 23 years old, is a prime example of an artist doing things correctly, and alongside his artistic goals is an unparalleled sound that makes the whole package all the more sweeter. After a series of short length ventures, it finally became clear that the world needed a full body of work to truly present Mei with a chance to showcase his art on a major scale. With this comes the full-length debut for the 23-year-old, welcome to the world, Supernova.

As if the record couldn’t get any more impressive, it was written, produced, recorded, and performed by Mei. With such firm control of each track from the arrangement to the initial writing sessions, it is hard to not feel the young artist’s soul within the record. The title, Supernova, is an ode to transformation, the record delves into the life-altering realizations Mei made following a pivotal breakup. From a battle with his purpose, relationships, religion, and underlying world-view, came the tracks and heart of this record. Undoubtedly, the earnest writing and musicality of Supernova proves that sincerity shows and that when an artist puts their all into a record it is a beautiful experience for all parties involved.

The album begins with a gentle and cinematic ballad, “Videoscreens.” The track begins with the sounds of a film reel and intense risers, capturing the essence of a blockbuster film, slowly fading into the gentle and perfectly engineered vocal performance by Mei. With several vocal layers throughout the track, Mei continues to top himself, from harmony to harmony each line seemingly more graceful than the last. From the track’s middle section “ooos” which melt like a block of gold to the latter half’s more intense moments of vocal swells, this track is undoubtedly gorgeous. From top to bottom this track in itself is a constantly exploding sonic experience that packs an entire world of shifting energies into a mere three minutes. The imagery and depth of the lyric within the track are just as compelling, my personal favorites including, “praying to a video screen until my eyes turn red” and “I know I can shapeshift someday.” Setting up a theme for the remainder of the record, Mei states a simple yet profound maxim of, “digital nostalgia.”

A few more of the highlights on the record are led by the singles, “Reserve” and “Santa Fe Springs,” which I loved the first time I heard them and I love once again. If I could say more words I would but check out the pieces I wrote on both of those individual tracks for some more Mei adoration. Another key moment on the record has to be the seventh track, “Rubber Soles.” Not only because it is a nod to the Beatles, but the record is a well-rounded and once again vastly cinematic showing from the young talent. Opening with a lower-register moment over a few gentle keys, Mei allows himself to showcase his most raw and gorgeously full vocal performance to date. Eventually the track morphs into a daydream-like experience as Mei echoes, “rubber soles mold me into the pavement” and sends the listener into an introspective cascade. With an encapsulating video to match, this record is one you have to check out as soon as you can.

Finally the record concludes with “My Ayahuasca Summer,” a underplayed guitar-cut that serves as the perfect finishing track. With more of his staples the track has dramatic vocal swells and even introcues an angelic falsetto from the 23-year-old. The falsetto captures the essence of closure, with a special sweetness and strength it is the perfect element for the record’s final moments. Mei writes with respect to the final end of a romance and the conflicting emotions that undoubtedly arise. When the second half hits the track becomes a more psychedelic-inspired instrumental with the vocals widening the track into a field of wonder.

With this, Supernova is complete and it is truly an astounding record. With a sense of constant evolution and a clear emphasis on the compounding nature of each sound, Mei has created a true work of art. From his work with the pen to the insane production elements, Supernova is more than just a promising debut, it is an already masterfully-executed project. Be sure to listen in this weekend and let yourself find out why Mei is an artist to latch onto.