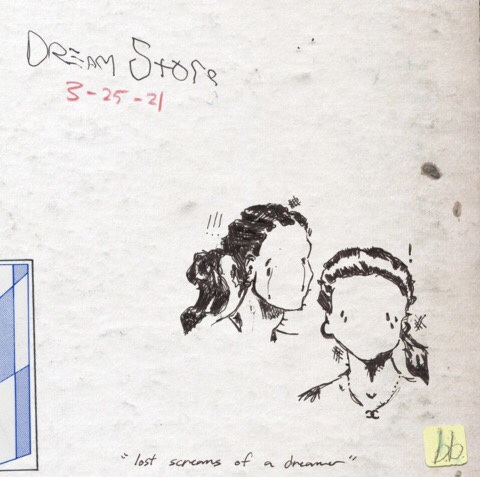 Benny Bellson initially caught my full attention with his recent debut, “Wasteful Games.” The track was raw, innovative, and representative of a more than promising future for the 19-year-old talent. After the release I was excited for more music but had no idea what to expect for the ensuing record. Soon enough, Bellson introduced his latest record, “Dream Store” and it is an amplified and fuller take to the similar styling of “Wasteful Games.” With the same grit and rawness, the same odes to alternative rock, and an all the more compelling vocal performance, I believe Bellson has once again struck that special chord.

The record’s art conveys the similar sensations of rawness and bare-bones artistry, from the scribbled handwriting gracing the upper-left corner, the inked out doodles and the ominous quote filling the lower third, “lost screams of a dreamer.” The package as a whole sets the mood and the track doubles-down and executes the message to near perfection.

Another concise showing from Bellson, the record is only about two and a half minutes but it is truly a ride. The production does not show much, mostly featuring a few distorted guitar tracks, slappy drum takes, and a deep bass filling up the low-end, it doesn’t take much to let Bellson’s pen game and vocal performance take over,. What is most impressive about, “Dream Store” is the consistency in the messaging, the production, writing, performance, and art all lead to the same ends, this sensation of emotional longing and the melancholy that often accompanies dream chasing.

From the track’s inception we are met with image-inducing writing as Bellson cements the track’s tone, “I call my mom / I”m coming home / These cigarettes can’t calm me down.” I can’t say enough about the writing on this record, it perfectly captures the sensations often associated with the alternative genre, with references to a strong nature of isolation, uncertainty, pleading for silence, and general tones of loneliness, Bellson touches all bases of the spiraling dreamer. This messaging is heightened by the vocal distortion employed on the record, slightly scratchy yet all the more pleasing to the ear, I can’t get over how each element of this record takes me to the exact emotional state Bellson refrences.

Musically, Bellson continues to impress with subtle yet powerful choices within the release. With a hectic first half, Bellson subdues the record with a gentle and hypnotic guitar lead taking us on a journey that perfectly splits the track. As the vocal explodes back into the mix, the 19-year-old showcases some more of his pen game and his ability to deliver some melodic rap. With one last showing of masterful songwriting Bellson echoes a simple couplet to run the track out, “I’m ready to check out / for the end of the rut.” The track slowly rides out over the simple two-track guitar and drums, allowing for a contemplative moment to bask in the entirety of the very emotion-inducing record.

From top to bottom I loved this record. The future is more than bright for Bellson, with a clear agenda and consistent messaging Bellson has the mark of a visionary. Get in on it now, Benny Bellson is here to stay and when it is all said and done his contributions to music will be notable. He has the sound, hear it yourself!