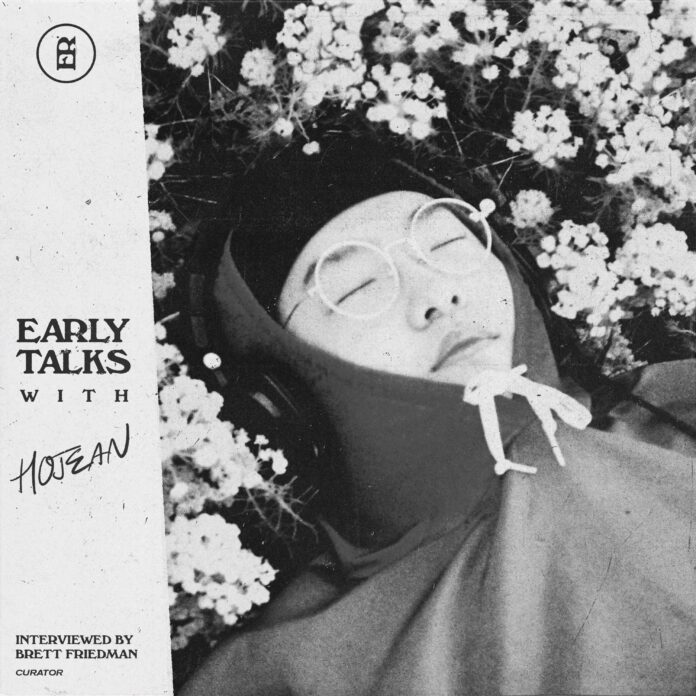 Georgia native, Hojean has quickly risen through the ranks in the bedroom pop community. Having a knack for making sad songs that feel good, a daily dose of Hojean is recommended from five out of five music doctors. Following the major success of “Over 85” and “You Feel Like,” Hojean is working on growing his discography as he gears up for the release for his newest single “far from here.”

With his most recent installation being a self-directed video for “Pick Up Your Phone,” Hojean has proven that he is more than just a beautiful voice, but an artist with a vision. Prior to the release of his newest single “far from here,” the Early Rising team was lucky enough to catch up with Hojean and ask him about music, movies, pokemon, and more!

Brett: What’s going on man? Hows everything going with you?

Hojean: Dude, I’m good doing good man I’ve just been waiting for this day. Also waiting for that vaccine shot. I cannot wait to take it. But other than that, I’m pretty good.

Brett: Lets start off easy. How old are you and where did you grow up?

Hojean: I am 22 years old and I grew up in New York, but now I live in Georgia.

Brett: How long have you been in Georgia for?

Hojean: Since I was like 11. Its definitely been a long couple of years, but Georgia is very fitting for me.

Brett: What is different about your experience in Georgia compared to New York?

Hojean: I feel like New York is too fast paced. Everything in Georgia goes at its own pace. I also love driving, and Georgia gives you that opportunity to drive without constantly worrying about hitting other cars, and the streets aren’t so tight.

Brett: Were there any musical influences from your childhood in New York? Or did it mainly stem from your time in Georgia?

Hojean: I’d say I got a lot of influence by spending time in my dads Toyota minivan. He’d often play a lot of old 90s music, so that’s where I listened to a majority of my music. Eventually, that just led into my interest in 80s and 90s r&b. So, I’d have to say my inspiration comes from 80s and 90s pop and r&b combined with today’s r&b.

Brett: I personally fell in love with music when I got an iPod classic back in elementary school. Do you remember what your first mp3 player was like?

Hojean: My first mp3 player was my voice memo app on my old Samsung phone. When I was younger, I would go next to my speaker and just record music by holding my phone next to it and waiting for it to finish. That was my experience.

Brett: Did you ever record a song and use it as your voicemail?

Hojean: I was never able to do that. I feel like if I heard it, I’d laugh, so I never did that.

Brett: Moving forward, your recent music videos have been incredible. Specifically, ‘Pick Up Your Phone’ where you self-produced and self-directed the video. Can you walk me through the journey behind that video?

Hojean: It’s a little long, but basically, I wanted to be an actor or director when I was younger. I used to make action movies by acting and directing them with friends in my backyard.

So, I was able to use those skills I learned earlier on the video. The actual video we shot flopped because the video started in the daytime and ended at night. So, the next day we ran through it again in like a four-hour period. Besides the first shoot flopping, it was a super fun experience.

Brett: I like that you’re a movie guy. Do you have a top three?

Hojean: I love a lot of old films. I’d say my top three in no particular order would have to be: Rush Hour, Indiana Jones, and Back to the Future. I’d put Men in Black in there somewhere too, but Back to the Future is where I developed my love for visuals.

Brett: Back to your music, I wanted to bring up the video for ‘Over 85’. Bringing little snippets of your fans singing the record in their car was very inclusive and thoughtful. How did that idea come to be?

Hojean: I had the great support of Jordan and Joshua to help me out with that. We all know how awesome and connected my supporters are. So we tried to do a DIY interactive video with all the submissions we received.

It turned out really well, but I felt bad because there were so many that didn’t make the video. I tried my best to fit them all in, but it was impossible because it would be like a new video per second, and it wouldn’t flow well.

Brett: I didn’t realize how many submissions you got, but that is the perfect segue into my next question. Were there any submissions that couldn’t make the cut for any specific reason?

Hojean: Yeah, for some reason, a lot of people only sent them doing the chorus, and I just couldn’t fit all of that in. Then there were some clips where it was just really dark, so they didn’t make the cut.

Then there were just a few that didn’t make the cut because they were doing inappropriate gestures with their bodies and everything. But that’s about it.

Brett: Your newest single ‘far from here’ drops this week. Could you tell us a little about it?

Hojean: Yeah of course. To me it was really fun to write because, the beginning starts off conflicting. Questioning like, “why am I hurting? Do I want to call you?” I often have a lot of sad sounding lyrics over really upbeat instrumentals, and these are the typical thoughts about you wanting someone to miss you as much as you miss them. At the same time, you don’t know if it’s a good idea, you know? So, there’s a lot of conflict inside the lyrics, but it’s a super fun song. I don’t know why I love doing that, but I always put sad lyrics over happy beats.

Brett: That’s amazing and almost perfectly summarizes the bedroom pop community as a whole. You’ve clearly created a strong base in the bedroom pop genre, but I was curious, if you were to step into a different genre, what would it be?

Hojean: I’d love to get into some sounds like Prince or like Michael Jackson. Some like beautiful, luscious, sexy guitars and smooth licks. A lot of falsettos. That is definitely the stuff that I listen to the most when I’m not listening to my own stuff.

Brett: Let’s do a little speed round on some unrelated questions.

Hojean: You’re going to hate me, but I don’t watch Pokemon. But I flexed some cards on my IG the other week because we were looking for a valuable holographic Pikachu card in McDonalds kids’ meals that sells for a lot online.

Brett: Do you have a favorite McFlurry?

Hojean: I grew up eating ramen almost every day, so probably pho

Brett: Does pineapple go on pizza?

Brett Subtitles or no subtitles?

Hojean: Subtitles. Im not a big fan of dub. It feels strange to me

Hojean: 7 season show. If it’s good, I can get attached to characters and it is a comfort for me sometimes. I actually had trouble finishing the last episode of iCarly because I didn’t want to know that it was ending. So, I didn’t watch the last episode for like a year.

Brett: For my final question, where does Hojean get his beanies?

Hojean: I either get them from Amazon or thrift stores. But you HAVE to clean them before you wear them if you get a beanie from a thrift store. I learned that Goodwill doesn’t wash the clothes before they put it out, so you got to wash it really well before wearing.

Hojean just released his newest single “far from you,” and it is everything you want in a Hojean record. Setting the scene on fire, Hojean is an artist you need to keep your eyes on this year!

If you're on the hunt for a new artist to indulge in, look no further. Blackpool, UK native, Nathan Day is here...
Read more
Interviews