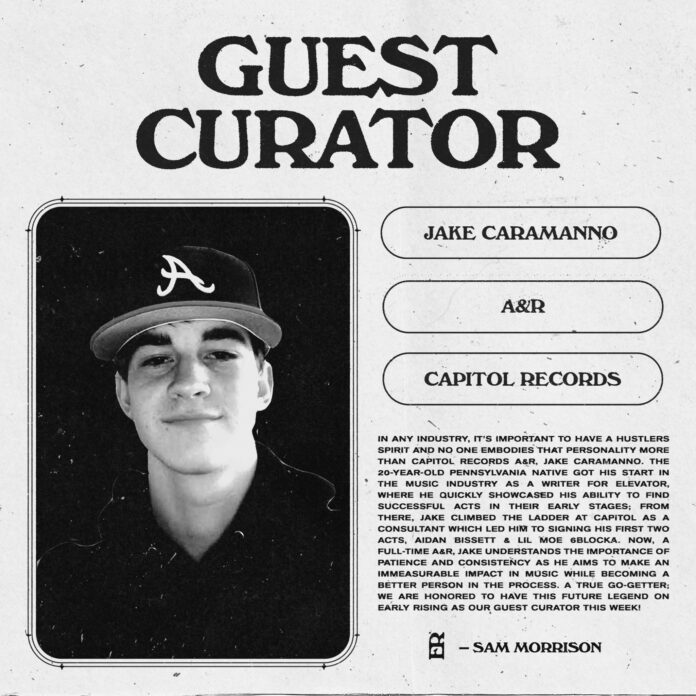 The music writing community is big, but small at the same time. Ever since getting my start at Lyrical Lemonade, I instantly became aware of other individuals in the industry who are killing it in the editorial space. One of these individuals is Jake Caramanno, who got his start in writing, but now finds himself making an impact in a way that many dream of doing. Any person who has met me, knows that I’m a huge fan of people who don’t take no for an answer and choose to chase opportunities instead of waiting for them to come their way. Now a days, the go-getter spirit is one of the most coveted traits that any employer can look for and this week’s guest curator embodies that to the fullest.

After getting his start at Elevator, Jake quickly went from a local music lover to someone who instantly created a name for himself as the go to person for all things early. It seemed like every single day, I was reading an article from Jake about an artist who has since gone on to have a viral moment or sign a deal with a major record label. This knack for coming across things at the right time inevitably caught the attention of labels which led to the young hustler signing on to Capitol Records as an A&R consultant under high esteemed exec, Jeff Vaughn. After a brief season of growing and learning the ropes under one of the industry’s most innovative A&R teams, Jake signed his first two acts, Aidan Bissett & Lil Moe 6Blocka while getting promoted to a full-time A&R position.

From writer, to consultant, to now full-time A&R, Jake is the definition of hardworking and passionate. Citing patience and consistency as two of his most important values, the up and coming world changer is doing an amazing job of inspiring the younger generation into believing that your wildest dreams can be attainable if you put your mind to it. It’s been a pleasure watching Jake blossom into who he is today and we’re so honored to have him on the pages of Early Rising to guest curate this week’s playlist.

If you're on the hunt for a new artist to indulge in, look no further. Blackpool, UK native, Nathan Day is here...
Read more
Guest Curators