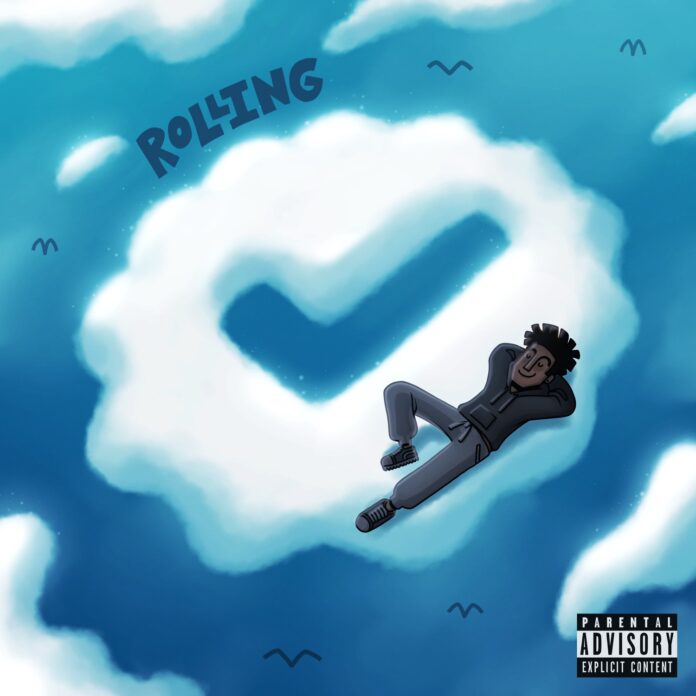 Chicago-based artist KingTrey is rapidly developing both his talent and recognition. I have a special appreciation and respect for him and his journey as an artist as we both attended the same high school. Although he is about 3 years older, I was familiar with Trey and his pursuit of music. After checking out his music years back, I became a fan of his work and continued to stay tuned in to his progress over the years. Now, he has blossomed from the local aspiring rapper I first discovered my freshman year of high school to the successful rising Chicago emcee we know as King Trey. Seeing Trey flourish over the last few years has been awe-inspiring as he proves to me and others alike that perseverance pays off.

With the release of his newest single “Rolling”, featuring fellow Chicago rapper Mick Jenkins, KingTrey kicks off the countdown to his forthcoming project “Blue Check EP” which releases May 21. I had the chance to sit down and ask Trey some questions about him and his journey as a rapper as well as his newest track, “Rolling”.

Introduce yourself! Where are you from? How old are you?

How did you get into music?/What or who inspired you to become a rapper?

I’ve been around music my whole life. My dad was a rapper so I was literally in studio sessions as a baby. I recorded my first song when I was 7 years old. Chance The Rapper definitely inspired me to take myself serious though and start dropping and carrying myself as an artist.

What does your project mean to you/What does it represent or speak to?

The Blue Check EP is a moment to celebrate. I’ve been going so hard for like four years straight and I haven’t had time to look up. I was already making celebratory music at the end of 2020 because that’s just the time when you reflect on the year and what you’ve done. When I found out I was gonna get verified, I decided to make a project with super happy music to celebrate. I named it BLUE CHECK EP because getting the check was a huge step. Kind of like a championing moment. I decided to make it an EP to represent the length I envisioned this (notional) celebration to be short, because we’re no were near done.

The final track is the most meaningful and is called, “I HAVEN’T MADE IT YET”, as to say “Thanks for coming to the party, now let’s get back to work”.

How would you describe your musical sound and style?

I would describe my music as happy music and music with substance. I try my best to be versatile. Sometimes I wanna make a banger and sometimes I wanna sing or talk about my pain and struggles. The main goal for me is to make sincere music that makes you feel something.

What is your creative process?

It’s different every time. I’ve just gone in the studio and made something on a whim. I’ve written a whole project before I even recorded. The last year or so I’ve been trying to keep a balance. I’ll write something maybe a hook and then I’ll do the verses in the studio. Or the other way around. I like to write but I know that some of the best art comes when you’re just in the moment and aren’t thinking to hard.

How did you connect with Mick Jenkins/What was it like working together?

Working with Mick was crazy on so many levels. I was a fan of Mick when I first became KingTrey. It was like 2013/14 and I was 14 years old. I reached out to him and I was excited to even get a reply. In my head I’m nowhere near famous so I still get starstruck all the time but I’m able to do a lot of things that I couldn’t before. I don’t think I’ve made it but a lot of people smaller and bigger than me treat me as if I have. I don’t know… I’ll let the reader be the judge of that (haha). I had this fire beat from this Chicago producer, Otto. Shout out to Otto. I sent it over to Mick and told him I wanted something wavy, something groovy. What he sent back was super fire. He was like “Let me know if you want something different, I tried to fit the vibe.” I was listening like “Are you kidding???!!”. It was super wild and I’m really happy with how the song came out.

What are some of the goals you aim to accomplish this year?

Bro I got so many goals. I hit a million total streams in 2020 and like 75% of that was from 2020. I told myself I wanted to at least 3 million this year alone. I’m a numbers guy, math was my always my favorite subject in School. I also wanna lock in some crazy features for my second full length project. I want a song with Boogie so bad bro. Well, he’s Westside Boogie now. Then I want someone from Chicago who’s style is like polar opposite to mine. Maybe G Herbo or Dreezy. I’ll get 2 out of the 3 names I just said. I’m manifesting that right now haha.

With KingTrey’s drive to succeed, as well as the rapid growth we are already seeing from him now, its safe to say we can expect another big year ahead. Go check out “Rolling”, featuring Mick Jenkins and stay tuned for his project “Blue Check EP” dropping May 21.

If you don’t recognize today’s early riser for his signature pink hair or his amazing TikToks, let me introduce you to none...
Read more
ReviewsQ&ARising Release