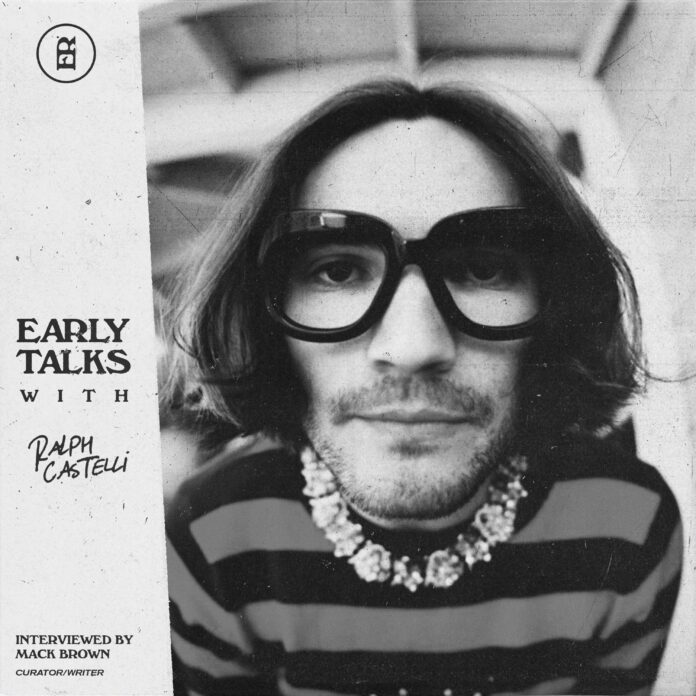 From writing and producing the first EP he released in 2017 by himself to garnering over one million monthly listeners on Spotify, it’s no doubt that Ralph Castelli is the blueprint for what it looks like to be a successful independent artist. Inherently eclectic and distinctively singular, Ralph’s music refuses to compromise originality, regardless of what is trending or popular at any given point. Over the last four years of releasing music, his artistry has shown no boundaries—his music is constantly changing and reflecting what is meaningful and relevant to him in the current moment, giving him a certain ‘je ne sais quoi’ and authenticity that can’t be replicated. We were lucky enough to have a chat with the Alaskan-born, now LA-based artist—get to know him below!

Mack: Well first off, how are you? What’ve you been up to lately?

Ralph: I’m good! I’ve been setting up this new studio. It’s in K-town—a bunch of my buddies have studios in this same building so I thought I’d move in. Been doing a lot of sessions, recording for other people, and writing for other people. I’ve been taking my own stuff at my own pace—just making music when I want to and when I’m inspired.

Mack: Can you share some of the people you’ve been collaborating with?

Mack: If someone didn’t know your music, how would you describe it to them? Either as moment or feeling or experience.

Ralph: Wow… Hmm… It’s been changing as I go because I’ve been putting out music for three or four years. Lately though, I’d describe it as suave—like real smooth, feeling yourself. My favorite thing is when I see people taking videos of themselves just feeling good about themselves to my music. When people listen to my stuff, I don’t want them to be sad but I don’t really expect them to be dancing either, I just want them to feel good about themselves—like they feel hot. I don’t want to add to the sadness, I’m just trying to make you feel good about yourself!

Mack: Very curious to know how the last year has been for you creatively, and have some insight into whether or not your typical routines have changed from pre-pandemic to now.

Ralph: I have these two lives—I write and produce for other people and a lot of passion lays there, and then there’s my own stuff that I’m super precious about. It’s almost impossible to stay inspired for myself constantly, and that’s when I started working on other people’s stuff because currently, for my project, I have nothing to say because I’ve just been sitting inside. I’m not going to force myself to try to say things… So the last year has been me shifting gears into helping other people say what they need to say.

Mack: That’s amazing. Do you think you’ve grown as a writer and producer in the last year just from doing it more consistently and getting to collaborate with different people?

Ralph: For sure! I’ve met so many new people and have been learning from them. I feel like such a novice in so many ways and I’m constantly learning from others now instead of being stuck in my room… There are people from all over the world coming to my studio, it’s been great.

Mack: I use Tik Tok way too much… I’ve seen a ton of videos using “Morning Sex” as the audio and it continues to have a moment, which is weird because it obviously a couple years old! Were you already on the platform before that happened? And have you seen have an impact on your general audience and engagement?

Ralph: I know! That song’s like two years old at this point. I wasn’t on the platform before. My trajectory over the last few years has been super organic—it’s just been people naturally coming in and everything is so incremental. Even with “Morning Sex” doing well on Tik Tok, I just saw it really incrementally and it just keeps going up. If you look at my trajectory it looks ridiculous! It’s been consistently going up, instead of going up and then down. I was like “Why is this song still growing?” and I couldn’t add it up. It’s not that usual for my songs to continue to do better over two years—usually it has a moment and then it’s done. So then I wondered where it was coming from and went on the app and saw 150,000 videos of people dancing with billions of views. Even now it’s still climbing!

I actually fell in love with the app after because I was like, “Woah this is so much more fun than Instagram.” Instagram is the most boring thing to me about being an artist. I like to make music and I don’t really want to be on social media. But Tik Tok made it fun because people actually kind of care what I’m doing on there! It’s been really fun for me to play along and watch people interact with my songs.

Mack: I’ve really been loving “Mystery” and even more, the music video! It’s so laid back and seems like you and a bunch of your friends hanging out and having fun—I’m a big fan. Do you have a favorite moment from making it?

Ralph: I found the director and DP and I was just like, “Hey, instead of some crazy plotline or story in my video… Can I just have an excuse to rent a cool car to get out of my Camry and spend an afternoon with my friends?” Best moment was probably the parachute—you know, the ones in like fourth grade you’d use in PE?—that was really cool to film because it’s still just as fun now. And again, driving a cool car was awesome and having a huge rig on the car was super great because I’m not used to crazy or high-production-value music videos… So just to see people setting stuff up on a really nice car I was like, “Wow, that is so cool.”

Mack: Earlier you mentioned the “community feeling” that you get living in LA… It seems like you have a really great balance of friends who are also creatives and you all get to help each other out. I’d love to know how you think this has influenced you or other projects?

Ralph: I just naturally gravitate towards creatives because I am one and it just feels easy to communicate and relate. In the industry, it’s hard to bump into non-creatives because everyone I meet is usually for a reason. I love hanging out with other artists specifically—it’s my cup of tea. I started this project with Jany Green, who’s my best friend, and I think that that was a pivotal moment where people understood that “Oh, Ralph isn’t in his room alone, he wants to hang out with people!” And from there we met good managers who helped us connect with other great people. So it all changed and started to have that communal feeling when I started working with Jany and that led to meeting new friends.

Mack: If you could choose any song that already exists and make it one that you made, what would it be?

Ralph: That’s such a good question dude… “Fake Plastic Trees” by Radiohead probably… Really wish I made that song.

Mack: Got it… Are you big on Radiohead?

Ralph: Huge Radiohead fan! To me it doesn’t get more authentic than them. Maybe Sufjan Stevens is as authentic and original… Those are my north stars.

Mack: What is the biggest thing that you’ve learned, either about yourself or in terms of being an artist and making music, between releasing your first music in 2017 and now?

Ralph: Probably that nobody knows what they’re talking about. What you make in your art is your art and in so many ways you shouldn’t listen to people when it comes to that. If you start listening to people it becomes a really slippery slope because you won’t know why they’re saying what they’re saying.

Mack: Totally agree. Do you say this from personal experience?

Ralph: For sure. I think in a business sense I’ve made things really hard for myself in the past by not just staying fully independent. I am still an independent artist though. When I first moved to LA it just felt like everyone knew way more than I did about this and the reality is that I actually have a really good thing going where I make music and some small amount of people care, and that’s what matters. Like, nothing else matters… Nothing! There’s me and the people that enjoy my music and everything in between is a bunch of BS.

Mack: What do we have to look forward to from you this year?

Ralph: I don’t know! I’m moving in such a strange way now. As soon as I get inspired I write a song and shoot a video within like a week or two and put it out as soon as possible. Like there’s no plan anymore for me. So, I guess… Next time I’m inspired! I wish I could say something like, “In six months there’s an album!” but the reality is I’m just waiting for another moment of inspiration to hit. I can’t wait to play shows, which will be really encouraging… I have a lot of songs… It just depends which ones I feel like putting out. It’s all very unforced.

Mack: So it’s all one big surprise! So I guess we’ll all just be patiently waiting and stoked in the meantime.

Ralph: When inspiration hits, it hits!

Irish singer, songwriter, producer, and multi-instrumentalist Cian Ducrot has been taking over the world with his fragile, heart-wrenching ballad, "I'll Be Waiting."...
Read more
Home FeatureInterviews