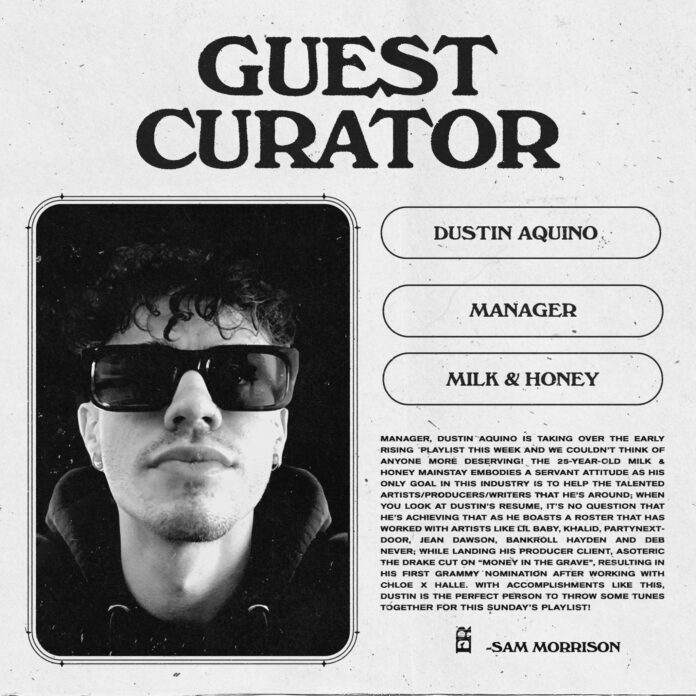 25-year-old Manager, Dustin Aquino is our guest curator for Volume 53 and we couldn’t be happier to give our coveted Early Rising playlist to someone who is so deserving. Here at Early Rising, our ethos and passion has always been built off of serving the industry and its artists in any way that we can. We hold our Guest curators to the exact same standard and Dustin undoubtedly embodies everything that makes this music industry good!

Finding his home at Milk & Honey, Dustin is hard at work, building artists, producers and writers from the ground up while connecting dots in order to ensure that they succeed. To this day, Dustin has garnered a plethora of achievements that include helping his producer client, Asoteric the Drake cut on “Money in the Grave, resulting in his first Grammy nomination after working with Chloe X Halle. At this moment, Dustin is able to say that he has a roster that has worked with artists like, Lil Baby, Khalid, PARTYNEXTDOOR, Jean Dawson, Bankroll Hayden and Deb Never.

When asking Dustin what project he’s most proud of getting to work on, the future exec explained:

“Wow, tough one. There’s a new wave of artists I’ve been fortunate enough to work with really early that now are getting their shine that’s incredibly rewarding. A client of mine Asoteric produced a song that went gold this year and was Grammy nominated, which he did with Scott Storch. It’s one of those full circle moments to work with people you grew up hearing about and are so accomplished and is such a legend.”

It’s very easy to see that Dustin has been putting in work over the last few years which is why he’s such a sought after talent in the industry right now! Make sure to check back in this Sunday to check out Dustin’s picks for the Early Rising Playlist!

While I’ve always been under the impression that age (to an extent) shouldn’t matter when you are evaluating an artist (as it...
Read more

After a bit of a hiatus since he released his EP “A Different Light” in May of 2020, Oceanside, CA native, Obed...
Read more
Guest Curators