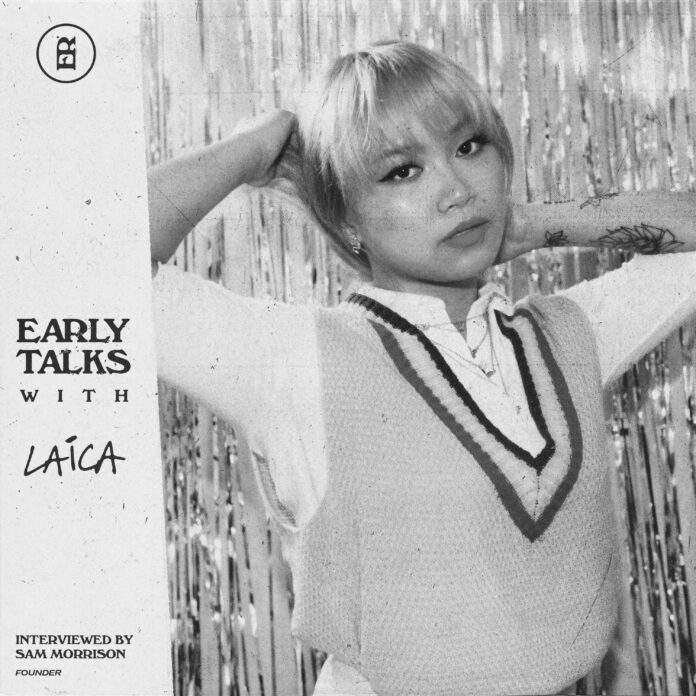 Since she began dropping music, Laica has been one of my favorite up and coming artists and this week I got the chance to sit down with the Dreams Never Die signee to talk about life, music and everything in between. If you’ve had the chance to listen to her music, you’d know that Laica is the real deal! Keep on reading down below to check out our latest installment of our Early Talks interview series featuring Laica!

Sam: What was your upbringing like and what led you to stumbling into music?

Laica: So actually, my mom lowkey forced me into it as a kid. Growing up in a filipino household, karaoke was a big deal for us. My mom was actually a singer herself, she just never pursued it because she was an immigrant here and obviously it was straight to work when it came to her immigrating here from the Philippines. So, she ended up having still having the dream of music, but she kind of passed it on to me. a At first, it was something the I didn’t partake in as much, but later on, once I figured out my own taste, I was able to get into it more. According to my mom, i’ve been singing since I was like two years old.

Sam: With your mom seeing how great you’re doing now, is she super pumped for you?

Laica: It took a while for her to understand that music was something I was taking seriously. Growing up in a very strict immigrant household, school was obviously very important and I was going to college at the time but half way into the 4 years, I decided to fully pursue music as I am now and just have a part time to support myself!

Sam: What was your musical career/path looking like in High School?

Laica: Middle School was actually the year when I broke to into music! I became known because I started posting youtube videos. I had a little bit of viral fame after I posted a cover of “We can’t Stop” by Miley Cyrus and yeah a lot of people ended up watching it.

Sam: how many views did it get?

Sam : how was a 14 year old processing all of this?

Laica: I thought it was crazy! And also this was around the time when the internet had already made its way to being the biggest thing ever. I honestly stopped doing the youtube thing though, because I started getting hate comments and that was something I couldn’t handle. Even if there are so many positive comments, you just can’t help dwelling over the hateful ones.

Sam: So, what inspired you to keep going after that?

Laica: So, I ended up finding a manager who ended up kind of letting me have the studio experience. It was amazing getting to know how songs were recorded and how much work goes into it. Especially recording. I think it as around when I was 16. At that point it was just a matter of me figuring out my sound. I was trying to mimic the sound of top 40 hits and then bedroom pop was introduced in my early college years and thats when I was inspired and  realized that you didn’t have to stick to one genre.

Sam: So with that, who are some artists who you just really love and even take inspiration from?

Laica: Ariana Grande big time! Frank Ocean…Those are my top 2 inspirations. I actually met Ariana when I was younger. I used to Busk out in Santa Monica and I met her when she was barely starting her career.

Sam : Yeah, was she still on Nickelodeon?

Laica: Yeah, she was on Sam and Cat, if you know the show!

Sam: Of course I know the show! Have you watched the brand new iCarly reboot?

Laica: No! I haven’t gotten he chance to since theres a subscription!

Sam: Yeah, you have to watch it. They’re on their cussing and stuff, it’s hilarious!

Laica: wow they cuss! I saw a clip of it and I was like yo that’s crazy!

Sam: Haha yea, sorry for that tangent. We can get back into it now. What was your 2020 like? You started dropping music on Spotify then, so what was that year like?

Laica: For the first EP that dropped, it was with the same producer, but that project was all written and ready in 2019 and we just released it in quarantine. And in the time we released it, I was already beginning to grow out of the phase of what I what I was singing about in the time. Those were my thoughts and feelings, but when you enter your twenties for some reason, it jus feels like you’re figuring yourself out and that was what I was going through at the time.

Sam: So when it comes to your creative process, what does that look like? How do you take a feeling and conceptualize it into something tangible?

Laica: I usually sit down and try to write a song. Whether its from a trash beat…I call them my trash beats…I make these little beats on logic that I would never release, but I take them to my producer. He basically grabs the idea from the beats I make and he makes them his own. But yeah, a lot of them are just melodies. I love making melodies first and then the lyrics come in a little bit later.

Sam: Tell me how you met the DND team!

Laica: That’s actually funny, because Chad actually found me through soundcloud. Through one of my songs on the last EP and I actually wasn’t supposed to post it because it was an a capella track that he happened to stumble on. I initially released it in 2019 and then obviously re released it in 2020. I love Chad though. He’s great. He’s jus super chill and laid back. I was just super surprised  because he’s obviously much older than me, but he’s able to connect with my thoughts and opinions in a cool way. He responds so quickly and he’s really always there for me which is a blessing.

Sam: Tell me about this most recent project and how you’re feeling that its now out for the world to hear.

Laica: To be honest, I was pretty nervous for this release because it felt like I finally created a little mini family of fans and I was afraid that they wouldn’t vibe wit my new music, but they did. This new project is still similar to my old sound but this is a bit more trappier than what I’ve done. Afterwards, I got a lot of relief because people liked it, but it was really cool to see something that I’m in love with made others fall in love with it as well.

Sam: So with that, what’s next for you? We’re almost done with the year which is crazy..So yeah, what’s next? What are some goals!

Laica: Although I would love some time to chill. I just want to keep going. I want to get more music and visual content out there! I really want to do a show. At least one before the year ends. Personally I Cant just take a break. I need to do something! I really want to play festivals. That’s a goal of mine for the future. Playing at Coachella would be wild. Even touring and doing my own headline show would be great!