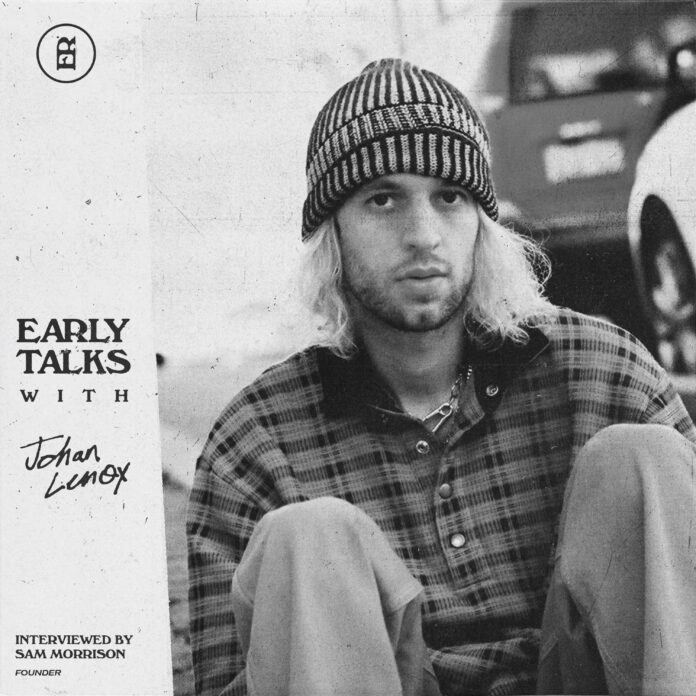 One of my favorite artists out right now is Johan Lenox. If you haven’t heard of the name before, then now is the perfect time to introduce you to a generational talent who deserves to be cherished in every way possible. I stumbled on the artist/producer/composer a while back and since then have fallen in love with the way his mind works and the music he creates. Often times collaborating with some of the world’s biggest names, Johan a classically trained musician is bridging the gap between classical and mainstream which allows him to occupy some amazing spaces from top to bottom. Not only is he a phenomenal artist, but an even better person, which is why I was so excited to get to chat with him about his music! If you’re looking for a treat, keep reading this week’s installment of the Early Talks Interview Series w/ John Lenox!

Sam: I’d love to hear about your upbringing! Where are you from and what got you into music? Did you come from a musical family?

Johan: I’m from Winchester Massachusetts, a town outside of Boston. My earliest memories of music were of my parents playing old show tunes on CD and then trying to learn them on the piano. They didn’t play music really but we were lucky to have a piano in our house and because I wasn’t allowed to have video games or watch cable TV I think I had a lot of free time to explore music on my own.

Sam: Which instruments did you learn first? What was that process like?

Johan: To this day piano is the only instrument I play. I began teaching myself and after a few years tried taking lessons but I really hated that, so I quit and went back to doing it my own way. Eventually I realized what I really wanted to be doing was writing orchestra music like some of my heroes who wrote film scores, so I started taking lessons in composing at a community music school in my town. Gradually I followed that path through high school and college and began composing classical music for orchestras professionally.

Sam: When was the moment you’d decided that you wanted to pursue music as a career?

Johan: Once I started taking it really seriously in high school I think I never really looked back, that was always the plan. The big shift took place toward the end of college when someone played me My Beautiful Dark Twisted Fantasy and I became interested in hip hop and pop music, having never really paid attention to those genres before. That’s when I decided to start pursuing the music I’m doing now.

Sam: When was the moment that you actually realized that you could do it?

Johan: I’ve done a lot of different stuff so I’ve had a lot of moments like this. I think I’m still early as a singer and artist which has been my main focus and to be honest I’m still waiting for that moment. I think when I sell out a tour for the first time I’ll know it’s really working. But as a producer certainly getting to work with Kanye and on Astroworld in the same year was a sign things were gonna be ok. Those basically the first time I got paid for doing music work as a producer. Getting signed by Island Records for a few EPs was another good sign that people were taking me seriously. But in the end I just want a committed fanbase and that’s been a more steady process.

Sam: What was the first little win that you received that pushed you to be great?

Johan: I guess if we’re talking about my career in pop and hip hop music the thing that really pushed me over the edge was this concert I did called Yeethoven, where I had an orchestra mashing up Kanye and Beethoven excerpts in a live concert. It was a big viral moment for me and helped open a ton of doors in the hip hop world, which in turn led to my own songs getting discovered more.

Johan: I start songs in a lot of different ways. Some of my best songs were just made entirely by myself at home on my couch with a laptop and a mic. At some point I bring in my friend Nate Donmoyer to help mix the production and tighten the drums and vocals sometimes. A lot of my other songs I’ve started with producers and artists in the room with me. I often get inspiration from working with new people and try to get as much from them as I can when it comes to writing and producing, because I want those new ideas. I can always take the song back and finesse the production and writing and vocals myself later but that initial spark is the hardest part to arrive at so I like taking inspiration off of collaborators who have different ideas from what I would normally gravitate towards.

Sam: What do you like more? Producing for other people or making your own stuff for your own artist project?

Johan: I much prefer working on my own stuff and being the one in control. That said, there are certain artists that I love to work with like 070 Shake or RMR who really inspire me and make me think different about my own music, and who are supportive of my own music, and I like working on their stuff with them because it helps me with my own music. But my favorite is definitely my stuff.

Sam: Whats a song/project/moment in your career that you’re most proud of?

Johan: Of the music I have out probably Phases ft Cousin Stizz. People seem really into that. But I think my upcoming album is the best stuff I have and I’m even more excited for what’s coming after that. I’m just eager to keep improving what I’m doing.

Johan: At this exact moment I’m planning a ton of stuff. Figuring out my live show, which I’m going to do with live strings. I had my friend Conrad (conradbyconrad) design these crazy pieces of headwear for the string players, sort of futuristic hunting hoods basically, so that was its own process. I’m planning multiple music videos at once, album cover art, chasing down a couple features for the album, and planning the marketing of it, all while trying to start writing the music that will come after it and continuing to produce for other artists. I’m doing the strings for Metro Boomin’s album right now as well.

Sam: Whats some advice that you’d give to an up and coming artist who is trying to make it in the music industry?

Johan: Either find a community of equally ambitious people in your city that you can work with closely and build a community around, release records together, put on shows together etc., or move somewhere like LA or Atlanta where there already is a huge community of people like that so you can find them.

I first wrote about artist/producer Noah Nockles earlier this year when I began writing for Early Rising. I was initially captivated by...
Read more
Interviews

Sam Morrison
Previous articleEslicky / Frenz
Next articlemidwxst / Made It Back