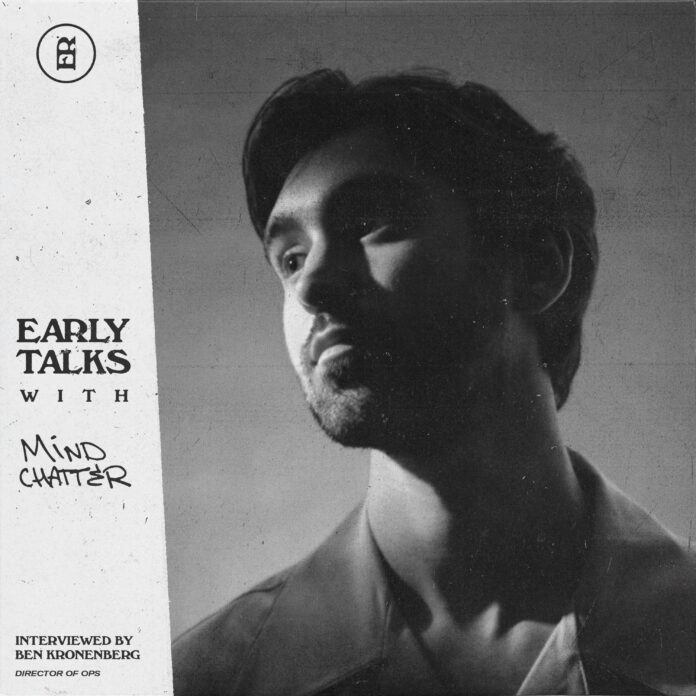 A few weeks ago, I got the opportunity to interview Mindchatter, one of my favorite electronic artists to rise in the last two years. In a space permeated by copycat culture, maximalism, and sensory overload, Mindchatter breaks through the mold, creating his own distinct brand of lyrical, organic, electronic music. Mindchatter’s career already includes a trove of singles, his debut album and opening for Polo & Pan’s US Tour, however, he’s only just scratched the surface of his artistic capabilities. With new music and concerts to look forward to, read our conversation and learn about the man behind the music below!

Let’s start off by learning a little bit about you.  Who are you? Where are you from? And where did you get your start in music?

Well, my name is Bryce, I’m originally from New York and I currently live in Brooklyn.  I’ve lived here for pretty much my entire life aside from four years in DC. I studied business at George Washington out there. The whole music career thing didn’t really start happening until two or three years ago. Secretly, I had been making music since 15 but it was definitely behind closed doors.  From 15 onwards, I obsessively made beats but I didn’t really share anything I was making.  I secretly had the dream to be a musician but, at the time, I was in business school, l so after I graduated, I decided to go to music school at Icon Collective in LA.  That’s the point when everything started to change for me.  At first I just wanted to be a producer, and I still consider myself a producer, but the vocals and songwriting all came to me when I was at Icon.

No I wasn’t super secretive about it.  I wasn’t trying to keep things in the dark. A good way to describe it is that my full-time career as a musician would be a big shock to some people who I grew up with and went to college with.  I did DJ a bit in college and put out a few remixes on SoundCloud but I wasn’t going around branding myself as a musician to everyone.

“The Whole purpose of music is to make people feel less lonely.”

Your sound is very unique. Just by listening to a few of your songs, it’s obvious that you came up listening to electronic music and are inspired by it, however, there’s so much additional instrumentation and added vocals that your music turns into something that can live in both worlds at the same time.

Yeah, thanks man.  I’m definitely going for that and I’m trying to merge the two worlds a little bit.  I have this vivid memory of a time when I saw this DJ, Stimming, perform when I was 18. I had this big moment where I was just in the crowd crying.  I started to think why his music didn’t have any lyrics.  Then I went deeper down the rabbit hole, thinking about if someone were to merge this with someone like Bob Dylan’s lyricism. Something so exciting paired with thought-provoking lyrics would be completely different than anything that came before it.

So after you finished at Icon, what happened? Where did you go? Did you make the jump to becoming a full-time musician after hiding this side of yourself for so long?

Well, making the decision to go to Icon was the first big step to say the least.  After Icon, I worked at a studio which fucking sucked for like a year-and-a-half.  I was a runner literally picking up Cardi B McDonald’s at 7am.  It was a very cool experience to be integrated in an environment like that but it should also be illegal-if I was a lawyer, the first thing I would look into is unpaid studio internships.  Once I did start to get paid, I began doing a good amount of engineering work with some pretty big artists but the music really wasn’t in my lane.  I was doing 90% rap sessions which I really didn’t like, however, one thing I found interesting and inspiring was how quickly these guys wrote their songs.  They would literally write and record a song in its entirety in ten minutes.  I personally am someone who spends so long focusing on every little detail so it was oddly inspiring to see people move so quickly and just keep the flow going.

After spending so much time in these specific studio environments, would you say that hip-hop plays a role in influencing your music?

I’m not sure if hip-hop influences my music so much, but like I said, it definitely plays a role in my songwriting process.  The improvisation and the idea that some of these artists would post a song they just recorded to YouTube, unmixed, unmastered, just raw music shared directly to fans was something that genuinely excited me. Instead of passing it through all these different channels, artists would just release their music on the spot.  I’m someone who makes four different versions and gets a song mastered by two different people, so it was definitely cool and eye-opening to be exposed to that style of recording.

Actually, those experiences did play a role in changing my recording process.  I work pretty quickly now and tend to not go backwards as much.  I don’t really like going into the studio that much anymore especially when there’s a time limit on the session and when someone else is paying for it.  I hate that.  I don’t like the feeling of being on the clock when I’m trying to make a song because it’s not something that should be scheduled a month ahead of time and inspiration also can’t be planned.  There isn’t really a method to the madness though, I usually write the vocal melody of the bassline first and then everything else starts to fall into place after that.

When I was researching this interview, I started looking for videos of your live sets and started to learn that you haven’t actually played too many live shows, the first of which being at Terminal 5 opening for Polo & Pan.  Was that actually your first live show? Walk me through that night.

Well actually my first show was in my managers basement and then my second was with Polo and Pan in Boston, the night before Terminal 5.  Boston was a really big venue too but the biggest hurdle for me was that the live set never crossed my mind when I was producing my music.  The first time I really started to think about my live presence was after we got the offer to open for Polo and Pan. I didn’t even have the equipment to play a live show but my manager didn’t tell them that.  I bought everything and had a month-and-a-half to put a show together. The pressure was definitely on but it definitely helped. If my feet weren’t over the fire, I probably would have dragged things on for much longer.

On the subject of shows, you just announced a tour this year.  Talk to me a little about that tour and what you have planned in terms of releases this year.

Yeah I’m doing a little West Coast run and then some random show in the woods in Arkansas I’m excited for. It’s a crazy lineup to be a part of so I’m sure it’ll be an interesting weekend. In terms of music, I’m putting out a string of singles leading up to an album coming in the future.  I don’t know the exact dates, but every few weeks another song will drop.

That’s super exciting.  You had an incredible 2020 so I’m sure whatever the future holds will build upon that. To finish off, I’m going to ask you a few quick questions that I’ve been wondering since I first heard “Trippy” last year. First off, where did you come up with Mindchatter? What does the name mean?

I came up with a list of potential artist names when I was like 19.  I actually rediscovered the list while I was at Icon. I don’t know how it popped into my head but I know anything that inspires me either spiritually or artistically all comes back to my thoughts and mind chatter. A lot of my inspiration comes from Buddhism, specifically a teaching describing that all suffering comes from thought and mind chatter. I’ve always connected with that and I wanted to find a way to incorporate it into my music, not in a preachy way but more so on a personal level.

Tell me a little about the visual aspect of your projects.  Every piece of artwork is obviously by the same artist and similar elements appear throughout so who is the artist and what is the general idea behind your artwork?

Yeah we actually knew him personally before I started releasing music.  I got connected because randomly my girlfriend’s best friend had been dating him for five years or something. so there’s a cool personal connection there.  From the start, I knew I wanted a hand-drawn aesthetic–my original mockup ideas were similar to in New Yorker cartoon illustrations.  Once I got connected with Simon, I knew he was perfect for the job so we immediately started coming up with themes together.  I knew that I wanted first cover to have a guy holding his eyeballs that were looking back at him as an ode to self awareness.  I think it was Simon that came up with the Greek statue and when he showed me the first revision, I immediately thought that it was amazing.  Now pretty much everything we do visually ties into some sort of Greek statue aesthetic and then the eyeballs as well.

What’s the lasting impression that you want to leave listeners with?

The whole purpose of music is to make people feel less lonely.  I guess that’s why I like to listen to and make my own music.

This was one of my favorite interviews I’ve done in a while. Bryce’s story is atypical, however, his unique road molded him into a boundary-breaking artist who lives by his own set of rules. Listen to Mindchatter’s discography below, make it out to one of his shows this fall, and get ready for new music coming soon!