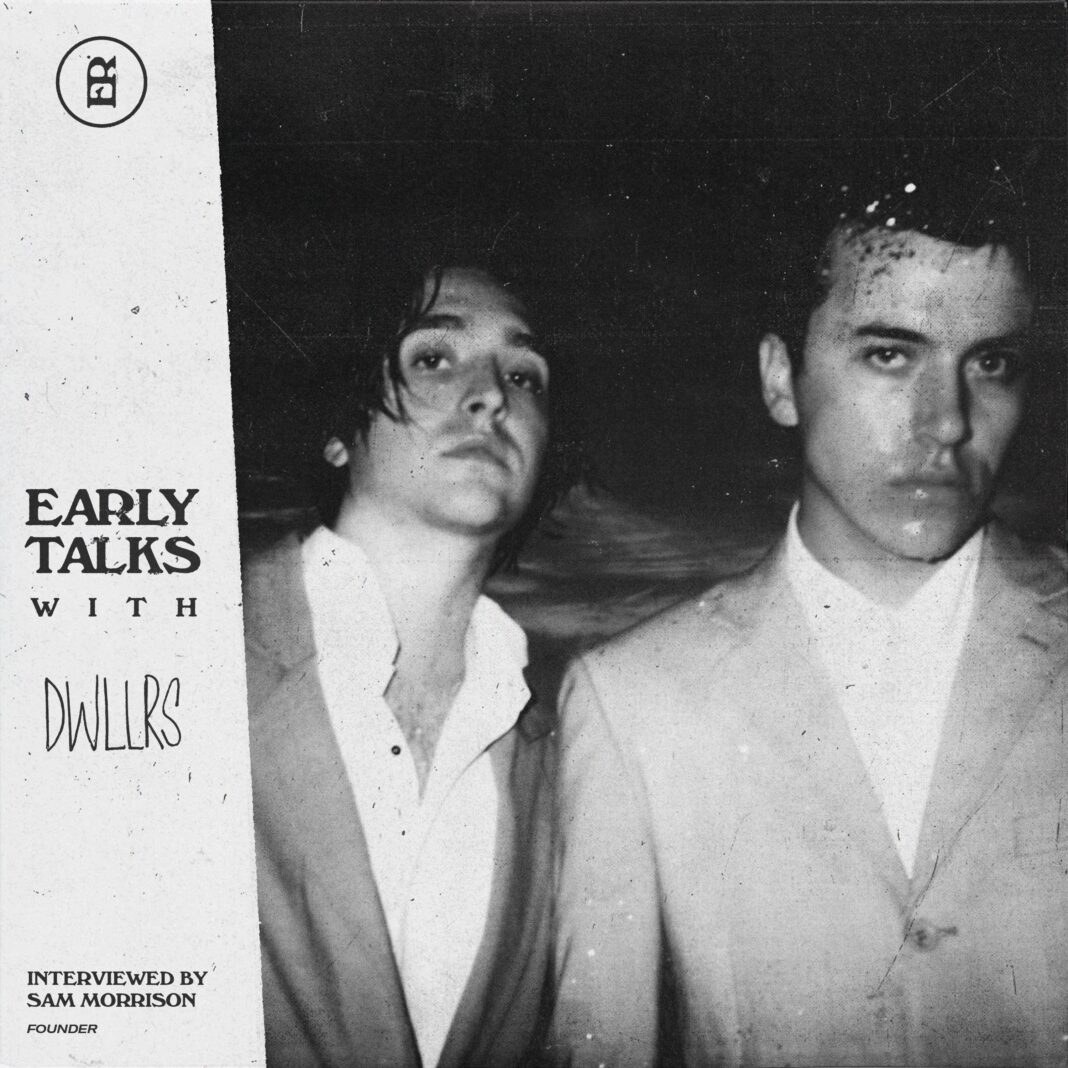 DWLLRS have been one of my favorite musical acts over the past year and although we’ve had them on our page many times before, today we get to dive deeper in to their story and uncover what makes them so special as a duo. Just last week, I had the chance to sit down with Bren and Joey of the DWLLRS and their manager to talk about life, music, the inception of this artists project and everything in between! Please continue reading to check out this week’s installment of the Early Talks interview series!

Sam: When was the moment the both of you stumped on music?

Joey: Neither of my parents were musicians, but they would play music around the house all of the time and I played music in church too. I did piano lessons for like a year when I was in Kindergarten and I hated it, so I started playing guitar. I took guitar lessons for four years and there was a moment when my guitar teacher wanted to record me singing one of the songs I wrote and when I put my headphones on and heard myself…I mean, I sounded terrible, but I knew I wanted to do something with it at that moment.

Bren: My parents aren’t musical either, but for me, I think it was Les Miserables…My earliest memory of seeing someone on stage singing was when I saw the 25th broadway anniversary show. I was probably like 9 or 10 and I remember sitting there and I was in awe. Since then, I had a dream of doing it as a career. Thats what I did up until senior year. I never thought of myself as someone who could do music full-time. I always just wanted to be an actor. I think that switched when I met Joey.

Sam: Okay, so with that, can y’all take me back to the first day ya’ll met? What was that like?

Joey: Well we played basketball together in the 5th grade, but I don’t think we really knew each other. We didn’t really talk. 7th and 8th grade we played together but we were more like acquaintances.

Bren: Probably like the actual moment I remembered talking to him was in HS. We were in this club called Best Buddies. I did it during my last two years of HS and I would dap Joey up and he would be like “bro, we gotta hang out”… we never hung out. But we both ended up going to Vanguard and the rest was really history.

Sam: What was the inspiration behind wanting to do this artists project together? What was that conversation like?

Bren: We would always talk about doing it together, but the one thing about Joey is that he’s a masterful facilitator and it all kind of started when Joey realized that I had been sitting on the same two chords and I came up with some ideas and I brought them to him and he was like, well what about if you do this and that’s literally how it all started. It was so genuine and authentic and we were both like, “this is pretty cool, we should do this.”

Sam: Okay, so Joey, when it comes to Bren, what is something that you appreciate about him that makes this partnership and friendship enjoyable?

Joey: He just has this raw talent in songwriting where everything he writes is so intentionally vulnerable and true. IT’s just really cool because I love listening to music where I feel like I’m listening to the person. We also laugh a lot together and are able to take a break from music and play basketball. WE’re best friends, so its really easy.

Sam: What about you Bren?

Bren: I’ve always looked up to Joey in music. Everything Ive ever made, my first thoughts are to send it to him and get his thoughts, because he’s such a genius when it comes to music, so anything that I do, I know I have to send it to him because he’ll be able to mold that and be honest with me. It’s the most daunting reality because I know it’ll make me realize the faults in what I’m making, but it’s a part of the process. IT’s how you make the best art. through refinement and time and dedication. That’s why its a great balance between us. I’m kind of sloppy. I have no vocal training, but Joey is so refined and masterful, so we meet in the middle.

Sam: Okay, where’s Dylan? Alright Dylan, tell me what enticed you about managing these guys in the first place and why do you think they have what it takes to make it all the way?

Dylan (Manager): Well, what initially attracted me was the attention to detail in the music. We live in this world where it’s so oversaturated and a lot of people make music to reach a certain audience, but with these guys, it’s a very intimate process and I think you hear that when you hear the lyrics and the sonics. They’ve very much built a world and that’s what gets me excited as a fan and a manager. There are a lot of people who make music thats commercially digestible, but what legacy are they trying to leave behind? What’s the greater vision in terms of what they’re trying to do with the vision and I think with a lot of artists, thats still a big question mark even years into releasing music, but when I talked to them, I felt like there was a clear vision of what DWLLRS is meant to be. I felt like I could sense a lot of people relating to what they do, because its very vulnerable in their music, which is hard to be as an artist. It’s hard to put that out there..so much of yourself, but thats when you create something special and people really do relate to it and build a connection to it far past just, “I like this song”. On a grand scale, thats what made me realize that I had to work with them. And they also just make music that I love, which is important. And as people, they’re just people that I want to be around and help grow!

Sam: What about y’all fellas? How has it been working with Dylan?

Joey: I mean , we didn’t even meet in person the first year that we knew each other, so I feel like we jus get along very well.

Bren: Yeah, I feel like naturally it just developed past a business relationship. I trust him with my career but also, I trust him when it comes to things outside of DWLLRS as well.

Joey: And I think also, I really respect Bourne as a father and a mentor. That’s really important to me, being able to respect the person who I’m working with, so its just been a blessing getting to do this with him.

Sam: Love that! So last question! What are some exciting things that ya’ll have cooking up?

Bren: Still trying to figure out the show situation, but I know we have a few  showcase situations coming up and then our own shows San Clemente/San Diego area. We have a music video coming for “Beauty Rains” and more songs are coming!