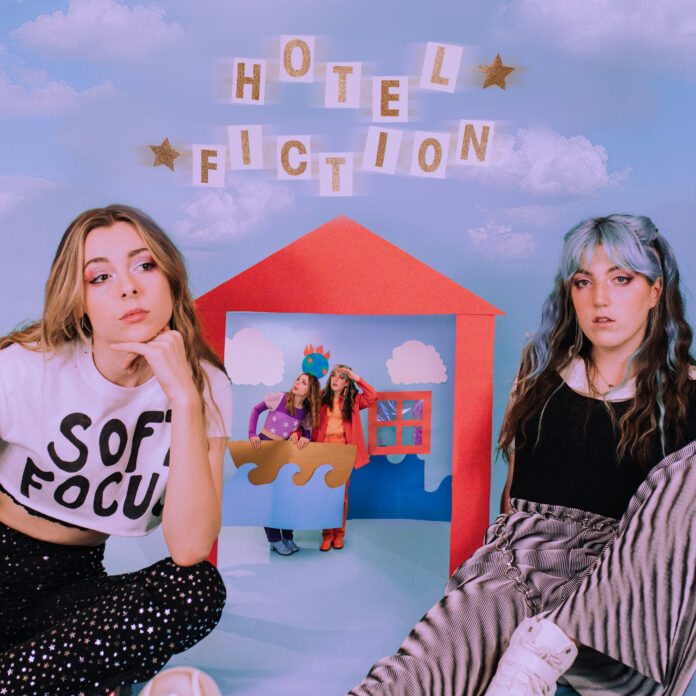 My second article ever written for Early Rising was on the track “Think Twice” by Hotel Fiction.

“Think Twice” was, and is, unlike anything I have ever heard before; it’s theatrical, it’s magical, and above all, it’s original. Now, Hotel Fiction is back and magical than ever with their debut album “Soft Focus” — and I couldn’t be happier to continue spreading their light with Early Rising’s readers.

“Soft Focus” takes aspects of indie, bedroom pop, and folk to create a blend of sounds that is authentically Hotel Fiction’s own. If I had to pick a phrase to describe it, it’d be somewhere along the lines of “space cowgirl.” Think: cowboy hats, metallic colors, and glitter eyeshadow. Combining folk-like vocal work and lyricism with indie-pop instrumentals, “Soft Focus” tells Hotel Fiction’s story in such a way that is palatable and easily digestible with a sparkly flair.

While I am biased in my affinity towards “Think Twice,” “Soft Focus” offers other standouts, including previously released single “Astronaut Kids” and title track “Soft Focus.”

One thing I love about children is their imagination and curiosity; one thing I disdain about growing older is losing that sense of wonder. “Astronaut Kids” captures the essence of wanting to dream like a kid in a simultaneously melancholic and endearing way. Kicking off with strictly keys and vocals, Hotel Fiction sings about the various dreams they had growing up — becoming a star, going to the moon, flying on a broom — right before entering the chorus, where they ask: Is it too much to wanna be an astronaut who sails the seas? / Is it too much to ask to be a kid forever? / And I know I’m too old to dream / And I should try to be something real / When I grow up.

As the song progresses, its production crescendos, growing upbeat with indie-pop drums and electric guitars. The increase of instrumentation offers a glimmer of hope seconds before the track ends where it began: posing the statement “​​And I know I’m too old to dream and I should try to be something real…” over heavy-hearted synths that fade into a warped distorted electric guitar. Although I believe you are never too old to accomplish your dreams, no matter how outlandish they may seem, “Astronaut Kids” perfectly captures one of the many inner conflicts one faces in their twenties.

“Soft Focus” is what I consider Hotel Fiction’s version of a standout banger, using a wide array of instrumentation and their style of a beat switch — beginning with soft vocals, keys, and subtle synths, slowly transforming into an entirely new song after a minute and a half. Just like “Astronaut Kids,” the change of pace directly reflects the lyricism.

“Soft Focus” begins telling a story about a relationship that once was content and is no longer. The moment minimal keys are exchanged for bouncy keys, eclectic drums, and electric guitars enter the picture, Hotel Fiction sings: You hit a wall / and you can’t get out of bed / and your roommate drank your milk / and the worlds on fire / but it’s ok / ‘Cause she will be fine / and you will be too for sure / Even if you have to go to the grocery store. Amidst all the minor inconveniences we face in life, alongside the major unfortunate circumstances the world is in, Hotel Fiction reminds us about the importance of optimism.

Hotel Fiction doesn’t write songs; they tell stories. Be sure to keep up with all things Hotel Fiction here, and stream “Soft Focus” below!

Tatum Van Damhttp://tatumsportfolio.com
i write about music that i want the world to hear (london, uk)
Previous articleJay Mclain
Next articleAnna Shoemaker / Sick!