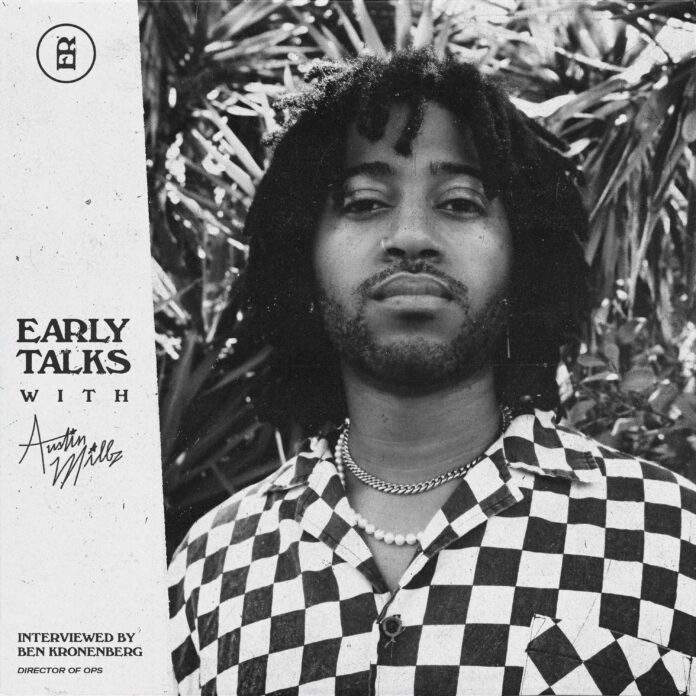 Last week, I sat down with artist/producer Austin Millz to talk about his life and his journey through music to where he is now. From his beginnings in Harlem, to his first look from Diddy’s A&R team, to working with his idols, Millz has been able to achieve some of his loftiest goals and he’s just getting started. Read about everything below!

To kick this off, can you walk me through who you are, where you’re from and a general overview of when you started making music.

I grew up in Harlem. Music is such an important part of the culture there that I was surrounded by it from a very young age. My life has always been engulfed in music like whenever we went on family outings or just walking down the street I would hear different music the entire time.  So many different cultures in one place, it truly is a melting pot.  Being in that environment it was second nature to me, I honestly didn’t really think about becoming a musician at the time but looking back, it’s pretty to cool to see what my first influences were.  I started making music in high school. Just putting together beat CDs and then sending them to rappers and artists in the area.  One of my beat CDs landed in the hands of an A&R and soon after I got a call from Puff to go their studio.  That was the first real recognition I received and that’s when I started to think that this could be my calling.

Did you drop everything right then and there to pursue a career as a musician?

No not at all.  I eventually went to college at Penn State University and got my degree.  Once that happened, I decided that music was going to be either something I did on the side when I had time or it was going to be the main focus.  I dwelled on that for a while and then, at one point, I quit my nine to five and poured everything into my music.

How was school? Did you study music?

I studied journalism and political science but I didn’t pick up anything about music.  For me, I didn’t want to learn and study music, it’s more of a natural feeling than anything else.  I’m not classically trained with anything music wise.  I was thinking about going to law school and making my parents happy but at one point but I decided that this wasn’t for me.  Let me go to my passion that’s always been sitting and lingering around…which was music.

What was the impetus to you making the jump to becoming a full-time musician?

For me, like I was at my 9-5 doing marketing and I started to realize that this really wasn’t for me.  I was producing at that time but I wasn’t DJing.  I was just producing but for me I’m like production is cool but something was missing.  Getting placements is cool but that wasn’t completely it for me.  Once I discovered electronic music in the way of performing live, that sealed the deal for me.  I went to made in America and saw Skrillex perform and I knew then and there that I had to do that.

From that first CD where you were sending around your beats and got your music into the hands of one of Diddy’s A&R’s.  What kind of music were you making at that point in time?

At that point, I was very Just Blaze inspired.  Soul samples and flipping.  I loved samples at that time.  I loved the feeling of taking something that had already been made and making it in my own special way. All of this feeds into what I’m making now, especially for my next project, Midas.  It’s a play on King Midas because everything he touches turns to gold.  That’s how I see myself flipping samples—taking something already done and making it into a fresh and modern way.

Once you made that jump into music full time, you were more of a producer than an artist.  After you started DJing and you made that jump towards an artist project, when did you release your first record? How did that first release go and how did it lead to where you are now?

My first official release was the Cyclone EP released under Fool’s Gold Records in 2017.  It was amazing because it was my first entryway into electronic music and dance music.  Shouts out to A-Trak.

From 2017 until now, what have you been working on? You dropped the Cyclone EP and a couple records scattered throughout 2019 and 2020.  Now it seems that you’re on a more consistent pace with consistent releases.  What’s your plan?

So Cyclone was 2017.  That was cool.  Still really trying to find my way, trying to find my sound.  I was working on a new EP after Cyclone and I did this track with Wale.  Skrillex got his hands on it and a few months later, I dropped the track with him in 2018 under OWSLA Records.  That was a pretty big thing to working my idol.  Things were definitely moving but I was still trying to find my sound.  Then I dropped “Broke Boy” on Defected Records in 2019 which was more house-driven.  After that, I moved to LA and really started to find my groove here.  I keyed in and when “Bad Behavior” dropped with Remi Wolf I knew that this was it.  I knew I found my sound.  It was a very gradual process for me but now I’ve found my sound and everything is going to be much more consistent because I know what I want to do.  I feel like I’m at the intersection of dance, soul, and pop and I have a lot more on the way.

Who are your biggest inspirations?

Just Blaze, Heatmakerz, Pharrell.  Those are my top three producers even to this day. Their music is timeless to me.

What is next for you?

So my EP, Midas, drops in October.  It has all the songs I dropped this year and a few more that no one’s heard yet.  That’ll be a full body of work and after that we have more singles, another body of work.  I plan to tour with these projects and continue to make more amazing tunes.  I want to keep people moving, grooving, and feeling good all around the world.

From where you’re at now, if you were to look back at your 2016 self, what would you say?

I would say be patient.  Everything you work for is worth having.  Stay focused at the mission at hand and trust the process because things might not happen at the moment you expect it but when they do its even better because you worked hard for it.

Right now different musical styles from all around the world are starting to rise into the mainstream pop sphere.  What are some of those international stylings that inspire you that you may incorporate into your music or that you already have incorporated?

I’m half Puerto Rican so everything reggaeton is very prevalent in my life and in my music.  Just the rhythm and the uptempo music—I love that stuff.  There’s a culture going on in South Africa right now called amapiano – that’s something that’s really inspiring to me right now. Amapiano and different styles of tribal house music from around the world are the two styles that I’m incorporating into my music right now.

Over the past year and a half, we’ve seen the rise of TikTok making musicians much more accessible and creating a new platform for musicians to promote their music.  What is your thought process through it all in terms of how you promote and market your music? Has it changed?

Honestly I like when things change because it keeps people on their toes.  I think the TikTok rise really forces people to think of quick ways to always be fresh and be quick with short form content.  It makes you market your music at a much faster pace and always stay up-to-date with everything that’s going on.  I think it’s really cool and it makes you think about the fact that you can’t stay content knowing that every 3-4 years something new is going to come out that shakes everything up and makes you start from scratch.

So last week you released “Gold” with Aluna.  How did that record come to life?

It was amazing man.  She’s one of the legends and has been at the top of my list for people I’ve wanted to work with since I got into this dance industry.  It was a process. I hit her up during COVID and we decided to wait until things started to settle down.  We ended up getting in the studio at the end of the year and we just made this song.  It was an amazing experience throughout.  Black creators in there figuring out ways to make a dance record, it was truly special and everything flowed so naturally.

Make sure to check out “Gold” by Austin Millz and Aluna below!

One of the most pleasant surprises of the year thus far has been an up and coming artist who goes by the...
Read more
Home FeatureInterviews