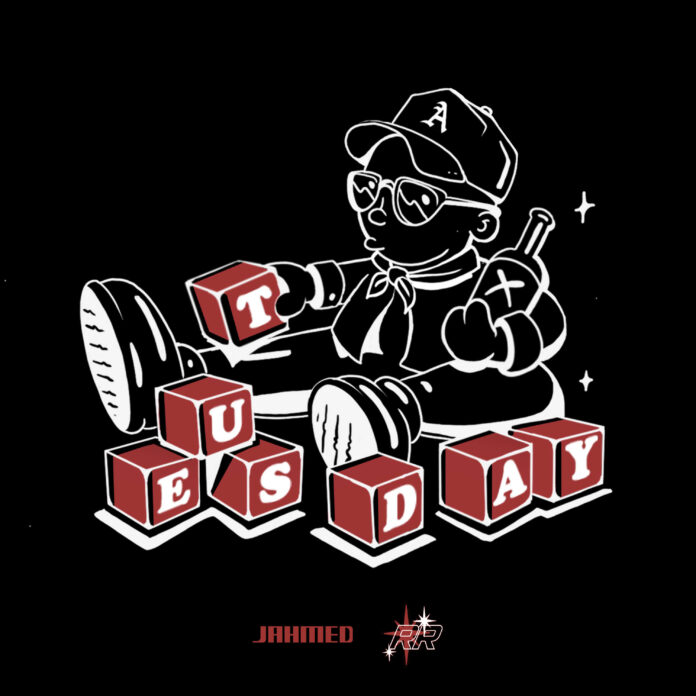 Hands down one of my favorite collaborations of the year.  Two incredibly talented rising artists, JAHMED and Ruby Red team up on “Tuesday,” the genre bending record that you need to add to your daily rotation.

Rising LA rapper Jahmed is one of the most important artists coming up in the LA hip-hop scene right now.  From mid-2020 to now, JAHMED has released a string of projects that showcase his unique writing style and authentic voice, making him one to watch as the year comes to a close.  Artist/producer duo, Ruby Red, is not who you may have expected to collaborate with JAHMED but that’s exactly the point.  Unlikely combinations make for the best results.

Together, JAHMED and Ruby Red present a record that I could have never predicted, however, that’s what I love most about it.  With both artists finding synergies in the middle ground between the hip-hop, pop, R&B, and debatably electronic spheres, “Tuesday” delves into a world of its own, inviting listeners to experience something unlike anything they’ve heard before.

When Ruby Red talked about what went into making this record, they spoke about the fact that “Tuesday” does not sound like anything they’ve released before.

“While “Tuesday” might seem like a departure from the Ruby Red sound, I think people who have known us for a long time won’t really see it as a surprise. We grew up listening to mostly rap and hip hop, and both of us have experimented in that world before. “Tuesday” is really just the first time as Ruby Red. That being said, the goal of this project has always been to blend together the genres that we love and grew up on, to make music that feels good regardless of what else you might be listening to.”

The production alone sounds like two separate tracks synced together perfectly.  Full of different textures and emotions, Daniel and Fernando of Ruby Red venture into uncharted territory carving out their own unique sound and leaving the big question: is this something that will continue into the future or will this sound live within “Tuesday” forever?  JAHMED’s writing and delivery stand out as the focal points of this record.  His technical abilites to stretch syllables and deliver crisp, clean verses with ease resonates as the main factor that differentiates him from everything else going on in rap right now.  JAHMED’s verses coupled with Ruby Red’s verse, which completely threw me off guard but I can’t get enough of, engage in a conversation that dances around your ears before you even realize your head bobbing up and down and the lyrics being etched in the inner-workings of your mind.

Above all, “Tuesday” is the perfect marriage between JAHMED’s distinct place in LA hip-hop and Ruby Red’s intricate production capabilities.  They are ones to watch and this record is something that you do not want to miss out on! Listen to “Tuesday” below and make sure to follow Ruby Red and JAHMED as they continue on their respective tears this year!

Myles Cameron is an act whose music I became familiar with not too long ago when I had the opportunity to cover...
Read more
Home FeatureReviewsRising Release