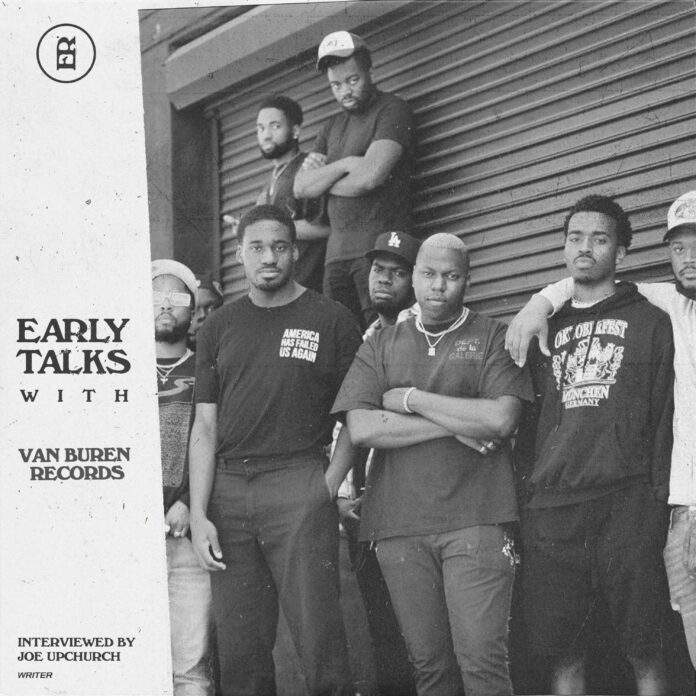 Although it feels like it could have been yesterday, I remember hearing Van Buren Records’ first single, “BRAINDEAD”, back in April and just being blown away by the potential that the collective of 13 had. Fast forward to now and that same Brockton, Massachusetts based group that was so obviously one of the industry’s best kept secrets has now flourished in a big way and viewed in high regards by many. What Van Buren Records has been able to accomplish in a meager 6 months is a feat that is nothing short of impressive and is a big reason to believe that a ceiling may not exist for this group.

Not only is the collective revolutionary from a structural standpoint (composed of rappers, producers, engineers, visual creatives, fashion designers, and more), but the music and community that they’ve formed is as well. About a month ago, I had the opportunity to watch the collective play a show at The Moroccan Lounge in L.A. and it truly was an experience unlike anything I’ve encountered before. I mean, how often will you ever get to see 13 people perform on a stage together all at once going crazy and supporting each other all at the same time? There was a sense of brotherhood and selflessness on the stage that makes you know that these guys are in it for the long run and for that reason along with many others, I knew that there was longevity here. Ever since the show and seeing the full package of what this group has to offer, there was no question that they were due an Early Talk in a big way, so I’m elated to host them on the platform today.

JU: For those who don’t know Van Buren Records, why don’t we start from the beginning. How did all 13 of you come to know each other and how did it all start?

JU: Talk to me a bit about the Massachusetts scene. It feels like that whole state and specifically the greater Boston area has been making a ton of noise recently. I get a sense that there is a lot of support within the creative community there. What do you think it is about the area that makes it such a creative hub?

VBR [Ricky] : I feel like it’s the people here. The people here are just very, very creative. There are just so many different types of creatives here as well. Like there’s the music aspect and the artistic people that draw and paint. Our studio is dope because there are just a bunch of paintings on the wall of different artists from our city. It’s just a culmination of all of these different types of creatives being in one area and just working with one another and collabing on certain things. Same thing with the musicians, there are so many of us that like each other and rock with each other’s music. It’s just a hub of creative people.

VBR [Felix]: I think the lack of creative resources around here inspires people to go harder and grind. Even in a city like Boston, just to get known by people from that city we have to do so much different sh*t to get that exposure, because we don’t really have any venues and barely any studios. All the studios I’ve been to in Brockton, someone made that themself or something like that.

JU: Not everyday do you come across collectives like what you guys have going on. While obviously much different in scope and creative realms, how have collectives like Internet Money or BROCKHAMPTON influenced your path as a collective. Do you think that groups before you have been able to show that massive collectives can make a big splash in the music scene and that’s opened doors for you all?

VBR [Jiles]:  In my personal opinion, I don’t think any of them influenced us. I think that we are just a group of individual artists who are all best friends and we just decided that we would be under one umbrella and work as a collective. It wasn’t ever no Internet Money, BROCKHAMPTON, or Wu-Tang, it was just that we were all in eachothers studio sessions anyways, so why not make music together? People started gravitating towards our group work and it just kept going from there.

VBR [Felix]: Ya, I don’t think we really looked at other collectives like that until after the fact that we got together. Then we started getting those comparisons and then I started doing a little research.

JU: From a creative standpoint, I’m curious to hear how you all function when it comes to recording. Are you all always in the studio together or are you recording on your own (or in smaller groups) and sending stems around?

VBR [Ricky]: I would say both. It just depends on the season and just the energy overall of what we are working on. If it’s a group project then someone might come in with an idea to the studio and there might be 2-3 people at the studio and someone comes in with an idea and says ‘yo, we should see if we can do something with this’ and then we build on top of that. Or if it’s solo work, then people pull up at their own times and get their own type of sound together and get it poppin’. Overall it just starts with the idea of ‘what should we do today’ and ‘how should we attack this?’. And then whoever feels like they want to hop on and do something, then they’ll go crazy.

JU: In some ways it feels like your come up has been so quick. I remember hearing you guys at a very early stage in regards to streaming numbers not too long ago and now you’ve got over 145,000 monthly listeners and have dropped an album and an EP in 2021. How did all this happen so quickly and what do you accredit your success to?

VBR [Home Invader]: We actually like to work. It’s a rarity these days. That’s pretty much it.

VBR [E]: Work isn’t work to us, it’s fun. When we are all together, we all have fun. It’s rare when you get all fourteen of us in the same room, but when you do, we are going to have a lot of fun.

VBR [Ricky]: Even when we are recording, we might laugh and joke around for 4 hours straight, but when we catch that one sound, we are like “alright, bet. Time to lock in”. So, it’s really just fun at the end of the day, we just crack jokes, and make sure this doesn’t feel like work in any way shape or form. We make it seem as natural as possible.

JU: You guys have dropped a ton of music this year, but most recently you dropped your 5-song, “BLACK WALL STREET” EP on August 27th – definitely one of my favorite projects in recent memory). Talk to me about what the project means to you all from a conceptual standpoint and also what the process of creating it was like.

VBR [Jiles]: With “Black Wall Street” it was kind of random. We didn’t really know we were making a tape until after. We linked up with Aziz (AzizTheShake) in L.A. who produced the whole tape, and we were just making music throughout that time. We went to L.A. twice within that time span, so in my opinion, each time we linked with other producers outside of Aziz I felt like our strongest records were Aziz-produced records. Then I guess one day he said we should do an EP since we had a bunch of records that we felt needed to be out in the world. We agreed and picked our strongest records and made a couple more records during our last session in L.A.. Then from there we just decided to name the tape “Black Wall Street”, that was Ricky and Luke’s idea. Then we got the ball rolling from there.

JU: I recently saw you all play in Los Angeles at the Moroccan Lounge on September 10th and have to say that it was one hell of a show. The energy was truly tremendous and the show was an experience that you just won’t get with anyone else. Having fourteen people on a stage at once makes for quite a night. While I know it has been a bit of an abbreviated tour with two more shows after L.A. and only one left, how has the tour been for you all? Any highlights?

VBR [Jiles]: I actually preferred the L.A. show more than the New York show, but I liked both shows. That was the first time we’ve performed together in a long time. It felt good performing those records for the first time ever. It was a great experience. I was happy that the turnout was like that for the L.A. and New York show. It kind of gave us a gauge of what to expect moving forward for this Boston show. Like what songs we felt like worked and what songs could have had more energy on both ends. I took it as more of a learning experience on my end.

JU: While we’ve been able to recap quite a bit, I’d love to wrap this up by talking about what is in store in the future. Anything that you guys are particularly looking forward to coming up? What are your goals for the end of 2021 and into 2022?

VBR [Felix]: I think that everyone is on go mode right now. Everyone is trying to do their own solo projects, EPs and Singles.

VBR [Ricky]: More videos and just getting back to individual work for real and really locking in on everybody’s projects. So, that’s for the most part how we are moving.

South Dakota native and Nashville based singer-songwriter Tiffany Johnson, is the creator of an incredible, catchy, and relatable track that has been...
Read more
Interviews