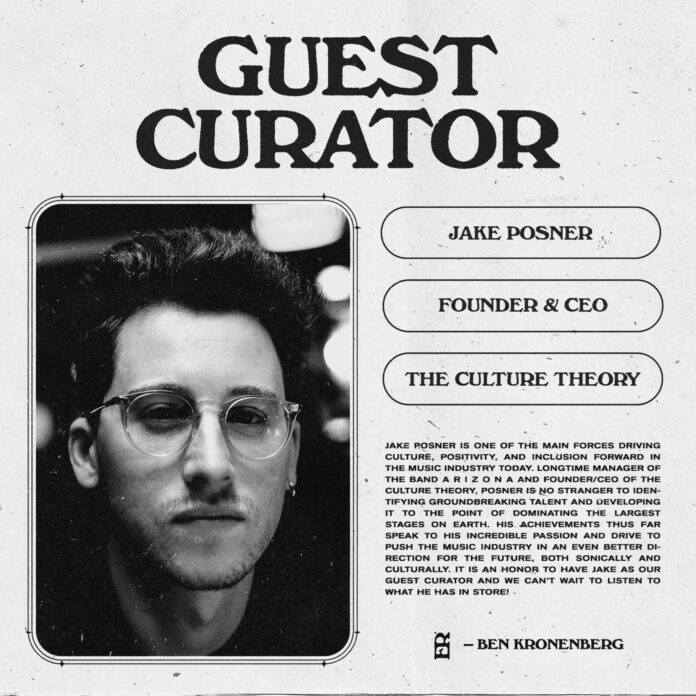 What an incredible figure in the music industry to have guest curate the Early Rising playlist this week! To one of the most genuine, selfless, and caring people I’ve come across thus far in my journey through the music industry, Jake Posner embodies everything that makes this facet of corporate America as special as it is. The longtime manager of standout electropop trio, A R I Z O N A, Posner is no stranger to identifying talent in its very early stages and developing it to the point of becoming one of the most popular acts appearing atop festival lineups all over the county.

Starting his career at the University of Indiana as a blogger and DJ, Posner found an appreciation for music during the developmental years of his youth.  After graduating and returning to his native New York to work in the advertising industry, Posner’s passion for music and desre to surround his life with soundwaves never wavered.  While working his advertising job Posner stumbled upon A R I Z O N A in the depths of a Reddit thread and the rest is really history.  He decided to take a leap of faith, created an incredible career for himself, and now serves as an advocate to those without close proximity to the music industry to take their own leap of faith.

After establishing himself as a manager with an incredible ear and a sixth sense for how to position a band for stardom, Posner expanded to where he is now, the founder and CEO of The Culture Theory, a management company specializing in artist, producer, and songwriter management.  The Culture Theory boasts a roster including A R I Z O N A, Eddie Serafica, Natania Lalwani, Sam MacPherson, Ethan Schneiderman, and so many more.  Posner has single-handedly carved out his own space within the music industry and, in the process, he became an outspoken advocate of New York’s thriving entrepreneurial and independent music scene.

Before I got the chance to meet and later work for Jake, I had always heard mumblings about his infectious personality and ability to make friends with virtually anyone.  Upon meeting the man himself, the initial descriptions don’t even do him justice, Jake is one of the most incredible people I’ve gotten the opportunity to work with and it really comes down to his morals and motivations.  An unspoken champion of identifying talent wherever it may be, Jake not only focuses on the music side of the industry, he also identifies incredible people looking to work in music and gives odd characters the chance to launch into a career with one of the best mentors by their side.  I’m sure his roster of previous interns and assistants can attest that there are few people that provide the level of education, opportunity, and exposure to individuals looking for a chance than Jake Posner. I caught up with Jake and asked him a few questions about his career – check it out below!

ER: What is the thing that keeps you so drawn towards music?

Posner: My work efforts have always been led by passion. Music is and always has been the beating heart of inspiration behind everything I do; so as my business has deepened over the years into the many different sides of the industry, so has my passion and appreciation for it all.

ER: What project are you most proud of working on/ was most memorable?

Posner: Building A R I Z O N A has been and continues to be one of the proudest achievements of my life. They continue to blow me away and drive me forward throughout my career. I discovered the band on Reddit in 2015, and they have since become a full-scale business whose tour stops have included the world’s most prolific arenas and festivals, and led to collaborations with artists who have inspired me to work in music in the first place.

ER: What are your goals for the future?

Posner: I’d like to create stability both for myself and those around me by developing and deepening the infrastructure of The Culture Theory to best serve our artists, writers, producers and managers I am bringing into the company, while continuing to steadily & strategically diversify my business.

ER: What is your mantra? What guides you?

Posner: Trust the process and be the best human being you can be. It is my firm belief that a rising tide raises all ships, and everything happens for a reason!

ER: What is the lasting impression that you want to leave?

Posner: Everyone can win at this game and you don’t have to ruthless to do it; just be good to those around you, share and learn from each-other. It can never be said enough…a rising tide raises all ships!

This week’s edition of the Early Rising playlist is going to be something truly special, and I’m expecting it to be wildly different from anything we’ve put out before.  With such creative and underground tastes, Posner will jump from pop to house and everything in between, curating one of our most diverse playlists to-date.  This is definitely not something that you’ll want to miss! Make sure to tune into the Early Rising playlist this Sunday to check out what Jake Posner has in store! Enjoy!