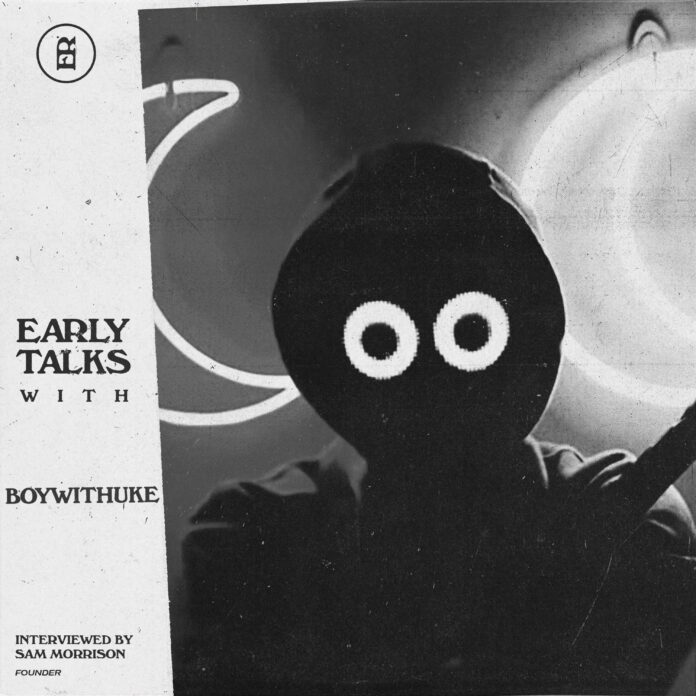 One of the most pleasant surprises of the year thus far has been an up and coming artist who goes by the name of BoyWithUke! If you’ve checked out tiktok, then odds are, you have been exposed to his immense talent and captivating charisma despite the fact that he doesn’t even show his face. The young star just released an EP not too long ago and it has already garnered the attention of Spotify’s biggest playlists. There’s no greater feeling than getting to highlight promising talent and he’s one of them. Keep scrolling to read this week’s installment of the Early Talks interview series!

Sam: How have you felt since the EP release brother?

BoyWithUke: It didn’t feel like anything that special to be honest, just because I had a lot of things going on at the time, but I really am happy with how this entire release went from an overall grand scheme of things type of way.

Sam: So, yeah there were 3 songs right?

Sam: Okay bet, so out of the 3, which one was your favorite one to make?

BoyWithUke: I think I had the most fun with Loafers to be honest. IT was one of my only songs where I was working with another producer. Sarcastic Sounds produced it, so it was cool because he’s super good at what he does which is great, because it’s always good to have the extra input.

Sam: And you usually produce all of your stuff by yourself yeah?

Sam: Awesome, so was this the first time you did a collaboration with somebody?

BoyWithUke: This was actually the second time. I did a collab earlier this year with Curio Watts. He sent an instrumental a while back and I really liked it.

Sam: How beneficial has the fanbase on tiktok been when it comes to your music and getting the word out?

BoyWithUke: Yeah, I’m really thankful for them because I’ll get these notifications that I’ve been tagged in stories or posts and it happens a lot, so I have been very grateful for the support. It’s been phenomenal.

Sam: And you’ve only been doing this music thing for what, 3, maybe 4 years right?

Sam: So if you could take yourself back to then, would you imagine that you would’ve been at this point?

BoyWithUke: Haha not at all bro!

Sam: With that, are there any areas that you want to evolve in or get bater at?

BoyWithUke: I really want to get better at producing. I’ve been sticking to garage band and going from there.

Sam: What does your process look like then? When you have the idea, how do you put it into a song?

BoyWithUke: It’s weird for me. I usually don’t come up with the idea first. I’ll just find the chord progression and the instrumental first and see how it makes me feel and then I write over top of it all.

Sam: How has your family felt about all of this success?

BoyWithUke: They’re pretty supportive of it. I know they value education a lot, so I’m sort of going to college almost for them, but still for myself, but they definitely support what I do.

In a beaming array of pop, rock, and electric-infused melodies, Dylan reintroduces her style with her latest release, "You're Not Harry Styles."...
Read more
Home FeatureInterviews