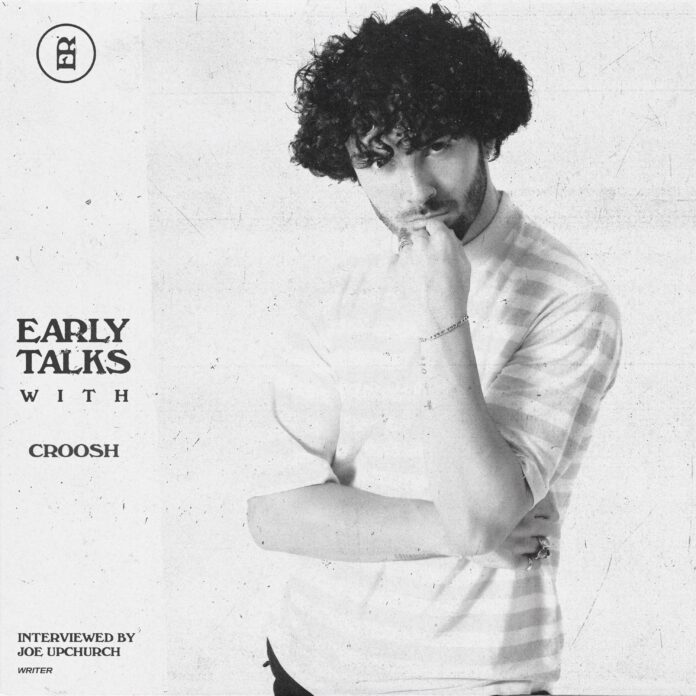 Today’s guest is a special one as it’s someone I’ve been dying to interview for quite some time. From his unprecedented level of output to his godly musical talents, Croosh, is an experienced creator who is no stranger to this industry. Having accrued over 75,000 followers on Spotify and more than 110,000,000 streams across DSPs, Croosh has proven that there is zero limit to what his project can be even as an independent artist. Without question, Croosh is a shining example of what hard work and consistency can do, especially when you are as talented as he is. Having released 116+ songs growing with each release and dropping 48 records in the year of 2021, Croosh has found a way to build a fanbase independently through the means of consistency. From using Patreon as a way to connect directly with fans and grow community at a grassroots level, to diving into his new single (“Parade”) and upcoming project (“Capsule 3”), there is a lot to unpack here and we did exactly that during our interview last week.

Joe: First and foremost, I always love to kick off my Early Talks getting to know a bit more about the person that I’m interviewing. Although I know your background a good bit, for fans who are just hearing about you for the first time now, who are you, where are you from, and how’d you get your start in music?

Croosh: I guess we can start with where I’m from. I moved all over. I was born in Utah and then I moved to Vegas when I was super young until around middle school. After that, I lived in L.A from then on. I pretty much claim L.A.. just because it’s where I’ve experienced the most things and I’ve done a lot of things for the first time just as a teenager. I kind of rep L.A., but truthfully I’m from all over. I would say my passion for music has always been there. It’s something that kind of just came naturally, so it was never a decision that I was going to be a musician. It was all interwoven throughout my life. I grew up on hundreds of different genres. Who am I? It’s tough. I would like to think I’m a pretty chill introspective guy. I’m not an introvert, but I am kind of a lone wolf. I’d rather be here cooking up than partying for example. In regards to my musical roots, I started making beats when I was like 14 or 15 and I didn’t actually record vocals until 17 or 18 and then I didn’t start putting anything out until I was about 19. I played a little guitar before producing, but it was just me messing around on a Fender. I would say I started to really get into it around 14 or 15.

Joe: Tell me a bit about who inspires you and your music?

Croosh: Literally every dope artist under the sun has influenced me. I can’t name one, but I do like a lot of old school stuff. Vinyl records are my thing. I like to put on James Brown, Led Zeppelin, Bob Marley, just the legends! I also like Amy Winehouse a lot. I pretty much like people that are dead (laughs). I like a lot of instrumental stuff. I listen to John Coltrane and Miles Davis – just Jazz. I think it gives my mind room to think of different stuff. What I listen to is not the type of stuff I make at all.

Joe: At the moment, you have a staggering 75,000 followers on Spotify. Tell me about how you’ve been able to grow such a big fan base? I know you’ve dropped 116 records since 2016, so that probably has a lot to do with it!

Croosh: I think it’s just the time that I’ve put in. Years of putting in work and just dropping constantly. Not going M.I.A. for too long and delivering quality music. I think that those three things are probably why I have my fanbase right now. I think a lot of my fanbase have been listening to my music for years, so part of it is like they kind of grew up with me. I’ve had people tell me they found me in middle school and now they are graduating college. I don’t think you can develop that type of fan if they found you a month ago. So, ya I think it’s just been a slow-marathon style of growing a fan base, but I think it develops more loyal fans. People have been there since day 1, which is pretty cool.

Joe: This year you and your team decided to drop 48 songs as a promise to fans. While I’m going to get into your methods for it a bit more in a second, why did you want to release so much music and how is it even possible?

Croosh: Ya, I don’t know. After the pandemic, the world kind of took a reset and that meant that my listeners took a huge pause. Because of that my listeners dropped in half of what it was. It was messing with me mentally since it had always been growth until that point. So I had to make a move to get back in the game and go super hard to get those numbers back. And now it’s like tripled the monthly listeners which is pretty cool. I think in today’s musical climate, so many people drop and the market is so saturated, that the only way to keep up is to match the market. Law of diminishing returns, if you throw out 48, then maybe 2 of them are hits. It was a ‘let’s get back in the race’ sort of thing. I make so much music that it’s doable to meet that quota. It does take some discipline though.

Joe: Talk to me a bit more about using Patreon and how you’ve been able to really be a pioneering force on the platform – using it to connect directly with fans and grow the community at a grassroots level.

Croosh: Props to Kaden (Akahoshi, Croosh’s Manager) for that. He’s the brains behind that, that was his idea. I have so many songs that haven’t seen the light of day that are still pretty decent I think and the people in my Patreon really support me and they’d be down to hear stuff that I don’t think is completely polished or ready.  So it just made sense. I had enough music to drop for this whole year. All of the Patreon songs were made this year, last year, and some are from 3 or 4 years ago. It’s more of a personal, intimate thing. I wouldn’t show the world this, but I would show the people who support me enough to subscribe. It’s a bunch of styles that I’ve been trying. It’s kind of like a practice arena. If they vote a song to be good enough to actually be dropped, I will consider dropping it like I did with “Somebody”.

Joe: Now into the music! Let’s chat a bit more about what you’ve got coming up. Walk me through how you made your new single, “Parade”, and the story behind it.

Croosh: The story behind “Parade” is funny. I just got this new studio in New York City but  I initially had my studio at my apartment. I had just moved to Brooklyn a couple months ago and I’d been blasting music and the neighbors would be stomping on the floor. It was messing with my vibe and so I said “damn, they’re raining on my parade”. It’s funny because I made the song ambiguous as to what I’m talking about on purpose. You could assume that it’s about a girl, but it’s really about the vibe kill. That’s the theme of the song.

Joe: Rumor has it that you’ve got plans to release another mixtape by the end of the year called the “Capsule 3”. How did the project come about and what can we expect?

Croosh: Ya, so It’s really just a collection of all the singles I’ve dropped recently. It’s consolidated to be more listenable. It’s essentially a deluxe version of the singles, with a surprise two songs. This time we are going to do three surprise songs. This is the finale to end off the year. I think we are going to have a different strategy next year, I don’t think we are going to drop as crazy as we did this year. We are going to take it a little slower and make a select few hit as hard as they possibly can. Rather than just dropping one and then its next one up. I think they are both good strategies in their own way, but we are going to switch it up. I don’t know if I’ll ever drop this many songs in a year again, but I might.

Joe: I always like finishing these interviews off by talking about what is ahead for you. What are your goals for the end of 2021 and 2022?

Croosh: The main goal is to have a record pop off. It’s not that I’m chasing a hit, but we’re ready I think. I think we’ve reached a point where we are ready for stuff to pop off. The goal of this is to take this shit as far as we possibly can. I don’t want to get lost in how we will get there, but I want my mind to be tuned in to making the best stuff I can possibly make. That’s where Kaden comes in handy. He’s the organizer. He says let’s do this with this, and it allows me to keep my head down and focus on what really matters – the music. We’ve been training and sparring all this time, and it’s time to have that first bow. So, I’m excited man!

In a beaming array of pop, rock, and electric-infused melodies, Dylan reintroduces her style with her latest release, "You're Not Harry Styles."...
Read more
Interviews