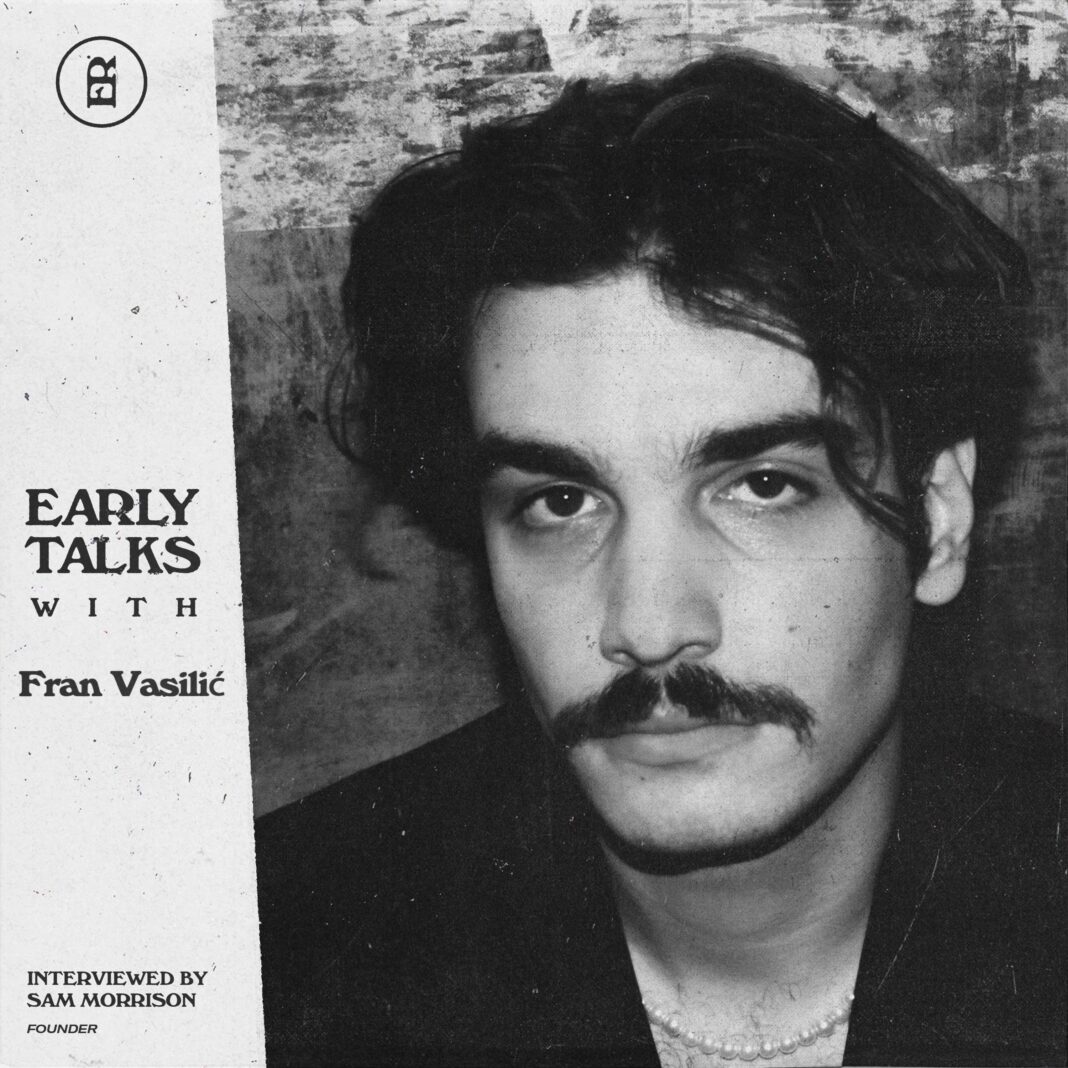 Sam: Tell us a bit about your background! Where are you from and what was your childhood like?

Fran: I come from the island of Krk in Croatia where I’ve spent the first 19 years of my life. Growing up in a small town you have to come to terms with the fact that everyone knows everyone and everything that everyone does. Because I knew how fast rumors spread, most of my childhood I wouldn’t talk to anyone about how I’m feeling, but I’d rather keep to myself and write about it. I also spent a lot of time on the internet growing up, mostly on Tumblr and that’s where I got a lot of the music I listen to from.

Sam: Were your parents/family members musical? Who showed you music for the first time, if you can remember?

Fran: No, my parents were definitely not musical and they hated that I spent a lot of my days in my room playing the guitar and singing for myself. I get it, though, my voice was always very raspy, so when they would come home from work tired, they would want to relax in peace without hearing me from the other room. And also they would probably prefer me to be doing my homework. They’re really supportive now, though, as they’re beginning to see the results of my work.

As far as my first encounter with music goes, my childhood is a blur so I couldn’t pinpoint an exact memory, but I was part of a children choir in kindergarten and elementary school, so that was probably one of the first times I had an active roles in music. I just remember being a really shy kid there and I specifically remember I never wanted to get a solo number.

Sam: When was the moment you realized you loved music?

Fran: Probably listening to “Is this it?” by the Strokes for the first time. I loved everything about that album from their image to the production, vocals and everything in between. I guess the thing I loved the most about it was the authenticity, from the first song to the last song it was clear who they are. And even know I’m a completly different artist in a different genre that’s much softer compared to them, I want to stay as authentic as they have been throughout the last 20 years. After discovering The Strokes, the internet exposed me to so many more of my favourite artists, and soon after that I also found my grandma’s and my mom’s vinyl collection which had everything ranging from Bowie to Bijelo Dugme and lots of other Yugoslavian bands.

Sam: When was the moment you realized that you wanted to make music your career for the rest of your life?

Fran: I don’t think that was ever a thought that went through my head until this year. It’s just such an impossible thing to do in Croatia. There are a few really really established old artists that can make significant money from music, however anyone new who is super successful in music oftentimes has to rely on other streams on income in order to be able to live, so even though I always loved music, I would feel delusional if I thought that I can make it a career. That’s also the reason that I’m so beyond grateful to have a global audience that is showing me support every day, because I don’t know any other artists in my region who have been blessed with that.

Sam: Who are some of your musical influences? If you could see any 5 artists (dead or alive) live in concert, who would those 5 people be?

Fran: They’re all over the place, but I would definitely want to see The Strokes, Tereza Kesovija, Amy Winehouse, Oliver Mandić and Rex Orange County.

Sam: When was your first musical win? (An achievement or success that made you realize that you could actually do this as a career?)

Fran: There were a few things that happened over 72 hours last October that made me feel like I’ve fully made it and I’m an A-lister already hahah! One of my TikToks got over 10k likes for the first time, a big Netflix actress followed me on instagram and shared my music, which was the first time I got validation from someone in the industry, my music got played on a Croatian radio station and I started getting reached out by a bunch of labels and so I started asking some of the smaller-to-mid-size artists that I follow for advice and got to facetime with some and got a lot of really important tips from them.

Sam: What is your creative process like? How do you take an idea and turn it into a full fledged song?

Fran: I usually write most of my songs at night. Especially when I’m having trouble sleeping, usually there’s some thoughts keeping me up, so writing them down helps. My writing is very dependent on my mood, sometimes I feel like writing very raw and straight to the point lyrics and other times I write to paint an picture of how I’m feeling. I also keep notes of all of my ideas for lyrics I have throughout the day and I record voice memos of melody ideas which I often reference when writing. Or I also take the ideas and parts that I liked from scrapped songs into my new songs.

Sam: Tell us about this last song that you released? What inspired you to drop a well known Rex Cover and how are you feeling about it now?

Fran: I’ve been following Rex for a minute now and I think what he does is incredible. The song I covered is from his album Apricot Princess which was one of the first few albums I discovered in the genre that’s similar to the one I’m navigating. I was inspired to release this cover as it is one of my personal favourites out of all of the covers I did so far, and I feel like it will help me take my career into the direction I want to take it in. Obviously, as goes for any artist, my original work is more meaningful to me as I get to tell my own story and put my own personality and experience in it, so I’m definitely more excited for the next few releases that I have lined up and I think this cover is perfect for giving people a taste of what’s coming.

Sam: What are some goals that you have for yourself for 2022?

Fran: I started doing some live performing recently, and there’s definitely going to be a lot more of that in 2022. I’m also excited to do more visual work and music videos for the songs that are coming up. A personal goal is also to get out there more, meet more artists, and people in the industry, hopefully visit the US or UK soon, too!

Sam: What are you working on now and what are you excited to share with your fans and listeners?

Fran: I’m working on the best music of my career so far. The EP is called “The Very Last Thoughts on Earth” and the lead single “Maybe” is coming out in January.