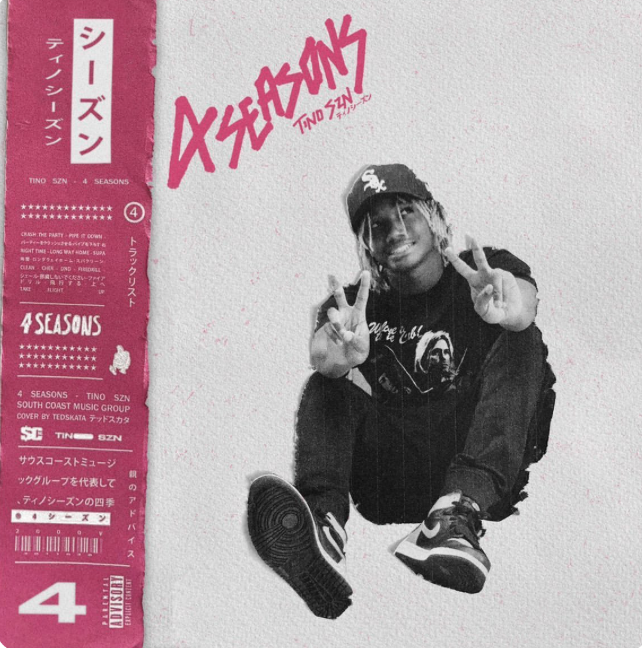 At only 17 years old, North Carolina based rapper TinoSzn is already making huge strides in his pursuit as an artist. With the release of his latest project, “4 Seasons”, Tino showcases his versatile sound, high octane energy and crisp production.

The 11 track album displays a variety of sounds and genre bending styles. On first two tracks of the project “Crash The Party”, and “DND” Tino demonstrates his expertise in the Playboi Carti/Lil Uzi-esque hemisphere of the rap genre. Riding the synth heavy beat with booming 808s, Tino brings all the hype and energy. On the third track, Tino switches up the vibe, tapping into his punk rock sound with a super cool trap/rock beat infusion. He jumps back and forth flowing over the hard hitting trap side of the song then switching to his punk vocals over the alternative side.

The ladder half of the project features other vibes such as “Pipe It Down” and “Fire Drill” also displaying Tino’s versatility. “Pipe it Down” is a soulful trap and r&b fusion with bouncy hi hats and vocal chops. On this song, Tino showcases his ability to switch up his flows and demonstrate a more mellow vibe with clever wordplay and a smooth cadence. One of my favorite tracks on the project, “Fire Drill”, displays Tino’s take on a drill style beat. The upbeat anthem shows Tino’s own take on a sound slightly outside of his typical style. He displays a creative and catchy flow that is distinctly unique to him further solidifying his ability to murder any style of his choosing. To end the album with a bang, the last track on the project “Vice” showcases a special feature from the legendary $not.

At his young age, Tino shows real talent and potential with nothing but room to continue to grow and flourish. You can listen to “4 Seasons” out now on streaming services and check out TinoSzn on Instagram to stay tuned for whats next.

Before we jump into the song, I first want to paint a picture of where 777Villain was just short of three years...
Read more
ReviewsProjectsRising Release