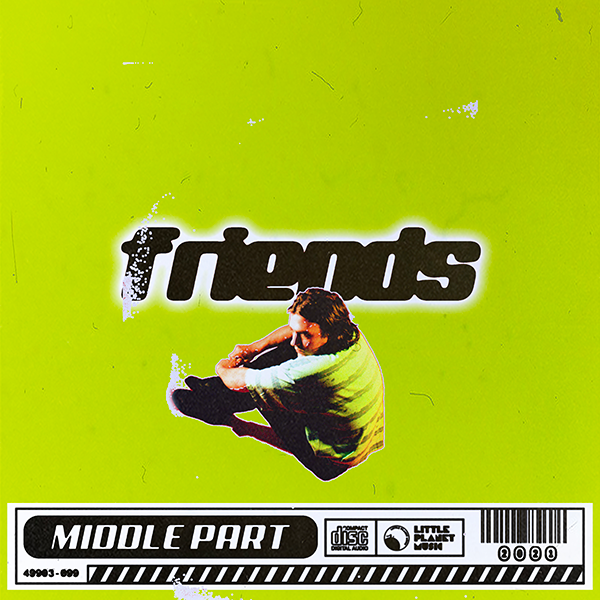 There is truly nothing better than a great pop song, is there? Middle Part’s newest single, “Friends,” is an obtusely pleasing pop-rock anthem, which precedes their upcoming EP, “I Wish I Was Alive.” The band, consisting of frontman Andrew Selkōw and producer Brian Zaremba, is a Brooklyn-based duo.

“Friends” is pleasing to the ear; a new take on the entirety of catchy music we hear today. The vocals are airy: leaving room for a dynamic climax at the peak of the song. “I couldn’t come up with a chorus to save my life. I ended up going through a split with a former partner, and as I was trying to track this idea I had, I switched it up and the lyrics just spilled out of me. It’s a big deal for me to write in a way that moves me. I can’t just spit out lyrics, and it’s all so introspective so capturing the spirit of that felt really good.”

Pondering over the remnants of a broken relationship, the track touches on how, in a parallel universe, the relationship could have worked out. A familiar feeling for many, reminiscing of the ease of a romantic bond, without considering the vital reasons for why it ended. Selkōw sings, “Now there’s something that I gotta say / Probably don’t wanna hear it anyway / Know you’re always saying that I think too much / But maybe in another life / We give it another try.”

The entirety of the band’s music is built upon the genuine, which is apparent in their candid recaps of past struggles: “I wanted to be really honest and vulnerable in this batch of songs. I’m so goddamn sensitive and hate to show it, but it just bleeds through all of my music,” said Selkōw.

Inspired by the sounds of many, the duo’s new track is melodically relevant, picking up on the notes of their favorite musicians. “I feel like through this record process Brian [Zaremba], and I have really found the sound we’ve been searching for, and a lot of what we are both inspired by is cutting through heavily both old and new. For example, the ending is an Alex G reference from a live performance that Brian and I really love.” I personally picked up on melodical nodes to indie-pop artists such as Clairo and girlhouse.

I’m a huge Middle Part fan, and you should be too. Listen to “Friends” below & on all streaming platforms.