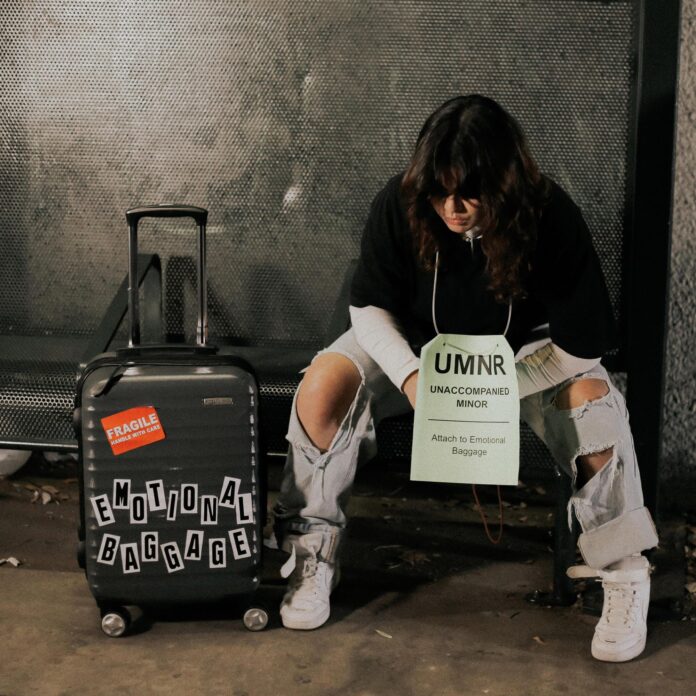 One of the most rewarding parts about writing for Early Rising is the ability to grow alongside an artist. What feels like ages ago now, I wrote a review — the first review, if I may add — on “Odd One Out” by morgen, an (at the time) 16-year old artist whose sound feels like a breath of fresh air in the bedroom-pop world. Last month I covered her track “Sweet 16,” an all-too-relatable track about the expectations versus the reality of turning 16, and today, I am beyond excited to be sharing her debut EP, “Unaccompanied Minor” with the Early Rising community.

“Unaccompanied Minor” is a 6 track EP that captures the energy of one’s teenage years — but not in the way you would expect it to. Instead of highlighting her formative years in a coming-of-age-film way, Morgen is honest with herself throughout her storytelling, as she comes to realize that your teenage years aren’t always how the movies make it seem… especially in the midst of a global pandemic.

The EP contains previously released singles, including “Odd One Out,” “3D,” and “Sweet 16.”  The new additions prove morgen’s versatility as an artist.

Meanwhile, “Fine By Me” is a bouncy, groovy, synth-poppy tune about not changing yourself for anyone. Morgen is unapologetically morgen, and it is most exemplified through this love letter to herself. “Fine By Me” is the kind of track that you can’t help but dance along to, despite being in a busy coffee shop surrounded by the entirety of London.

The last (but not least) addition, “Savor,” closes the project on a sincere note. The production is simple and bare, allowing for morgen’s falsetto to shine through. A ballad about first loves that may or may not be reciprocated, Morgen maintains her vulnerability in a way that is uniquely her own.

At this point, morgen is an Early Rising regular, so I thought I’d sit down and have a Q&A with her. Continue reading to learn a little more about what makes morgen, morgen, and to hear some thoughts on the release of “Unaccompanied Minor!”

T: Hi, morgen! How are you? Can you introduce yourself to Early Rising’s readers (your age, where you are from, any other essential info)?

M: YO! My name’s morgen, I’m a 17 year old music person from Santa Cruz, California, and I like pickle sandwiches 🙂

T: How did music play a role in your early years of life? Who/what from your upbringing has influenced your artistry?

M: Well music has always been a huge part of my life, and I think both of my parents really influenced my passion for music. My mom used to constantly shove classics like Led Zeppelin, ACDC, Cat Stevens, Kansas, Santana, Earth Wind and Fire, etc. etc. down my throat when I was young and my dad used to be a musician so we played music growing up. It was just always around.

T: I initially discovered you when you released your first single, Odd One Out, which now has over 300,000 streams! So far, what has been the most rewarding moment of your musical career?

T: And today, you released your debut EP ‘Unaccompanied Minor’, woohoo! Can you explain the inspiration behind the project/how it came to be?

M: Genuinely my everyday problems and the pandemic were the inspirations for my debut EP. Growing up is really not a pleasurable experience a lot of the time, then add a global pandemic on top of that and you have an EP by a very emotionally unsound teenager who has no idea what’s going on.

T: Is there anything you hope people take away when they listen to ‘Unaccompanied Minor’?

M: Pretty much the same thing I’ve said for all of my music, hopefully you’ll take away a sense of relatability…or maybe just feel a little less alone? I don’t know, I think Unaccompanied Minor touches on a lot of pertinent subjects to the “teenage experience” which pretty much everybody goes through, so it’s just another safe space for people to get a little “you’re not alone, you’re just lonely like me” vibe to chill with.

T: What’s your favorite lyric on the EP? Can you give us a little genius-style annotation?

M: I really love the line “I don’t wanna miss it, cliche teenage wishlists and first kisses – But would that even happen? No” because it really shows the effect of Hollywood and pop culture that inflicts this idea that we have to have this really crazy-exciting-romantic teenage experience, when, in reality,  that’s definitely not what happens.

T: Is there anything we can expect from you in the new year?

M: More music FOR SURE. I’m literally so excited to share the stuff I’ve been working on.

M: Sure, have you eaten today or had any water? Please keep your body going and WEAR A MASK 🙂 much love!!

T: Thank you so much for taking the time to answer these questions! Happy holidays 🙂

M: Thank you so much for your support for my first ever project!

Morgen is the kind of artist I wish I had when I was 16. She captures the teenage experience in an honest light that is relatable to all, regardless of age.

Keep up with all things morgen, and stream “Unaccompanied Minor” below!

Before we jump into the song, I first want to paint a picture of where 777Villain was just short of three years...
Read more
ReviewsProjectsQ&A