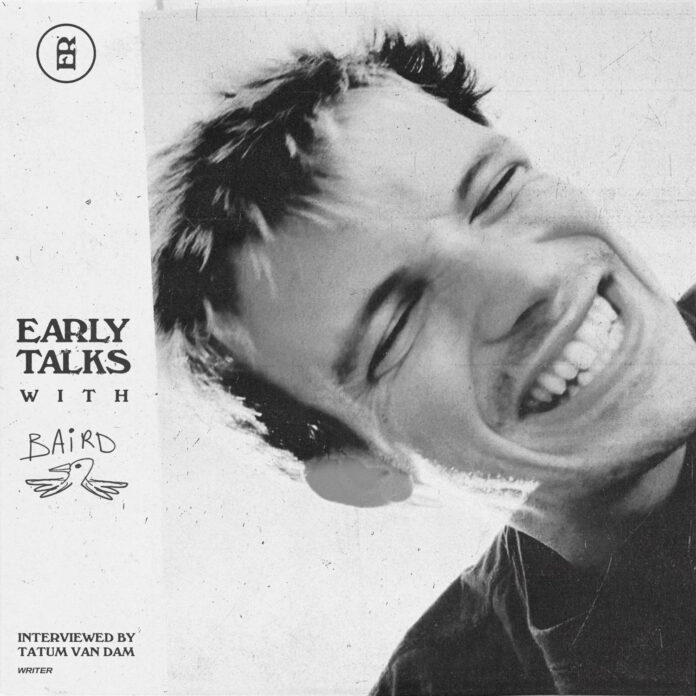 Tatum: Let’s take things back to the beginning; can you remember your first encounter with music? What/who did you listen to growing up?

Baird: I remember sitting through my brother’s piano lessons when I was 3 or 4. When we’d get home I’d bang on the keys with my fists. I remember pretending the low notes were thunder and the high ones were rain. That was probably my first encounter. Growing up my parents played a lot of good music, heavy on the Beatles and Stevie especially. My brother put me onto a lot of stuff once he was in high school too. I remember having James Blake’s first album, In Rainbows by Radiohead, Kanye’s Graduation, stuff like that rotating on CD in the car.

Tatum: How did “Baird” come to be? Was making music something you’ve always known you wanted to pursue?

Baird: Definitely. For a while I was making music under another alias. Then one of my friends from Baltimore was like “Man, you already have a unique name, you should just use it” and he was totally right. So I kind of shifted gears, started doing more songwriting stuff and releasing it as “Baird.” Since I can’t really change my name it forces me to make what feels real to me. Not to say that all the songs are gonna be hyper-confessional, but rather that I’m saying “Here, this is what I’m capable of doing right now,” Bill Withers style.

Baird: I think of it like collage. Mixing and matching sounds. Ideally I work fast so it stays instinctual, bouncing between instruments and recording lots of different iterations. I’ll usually try to do at least one new technique to keep on my toes, maybe it’s a new tuning or playing my bass through a vocal effect chain, whatever. Then I’ll throw together different loops and see what works. Once something is really sticking I’ll let it the whole thing play on loop and write on top of it.

Tatum: You have a number of songwriting credits, most notably on ten tracks across Brockhampton’s “Roadrunner: New Light, New machine.” Are there any other artists out there you hope to collaborate with?

Baird: Yeah I love working on other artists’ projects. You always learn more doing that. There’s so many people I’d love to work with, Lianne La Havas, Erika De Casier, Ravyn Lenae to name a few.

Tatum: Congrats on the release of “Darkness of the Night”! Can you explain how the track came to be?

Baird: Thank you! I was just playing a lot of guitar during lockdown and that riff and the lyrics kind of arrived all at once. There were obviously a lot of ideas floating around when I sat down to figure out what should go on the next project and that little melody kept popping up in my head, insisting that it needed to be finished… I’ve been getting more into making videos too and this music video has definitely been the most challenging but also the most fun one to make so far.

Baird: It’s my next single “Lightning of July.” I think it’s the best song I’ve made so far, at least in terms of songwriting. Playing it live has been really fun. I feel lucky that the song came to me.

Tatum: Anything we can expect from you in the new year?

Baird: Yeah! My mixtape BIRDSONGS, vol. 3 is dropping in February and we’re gonna do a release show at the Echo. I’m also gonna do one more music video with the project. Then, my brother and I are gonna put out an album we’ve been working on together… Then, who knows. I think three projects in 2022 is a good goal.

Tatum: Thank you for taking the time to answer these questions!

Baird: Thanks for asking!

Keep up with all things Baird, and stream his latest release, “Darkness of the Night,” below!