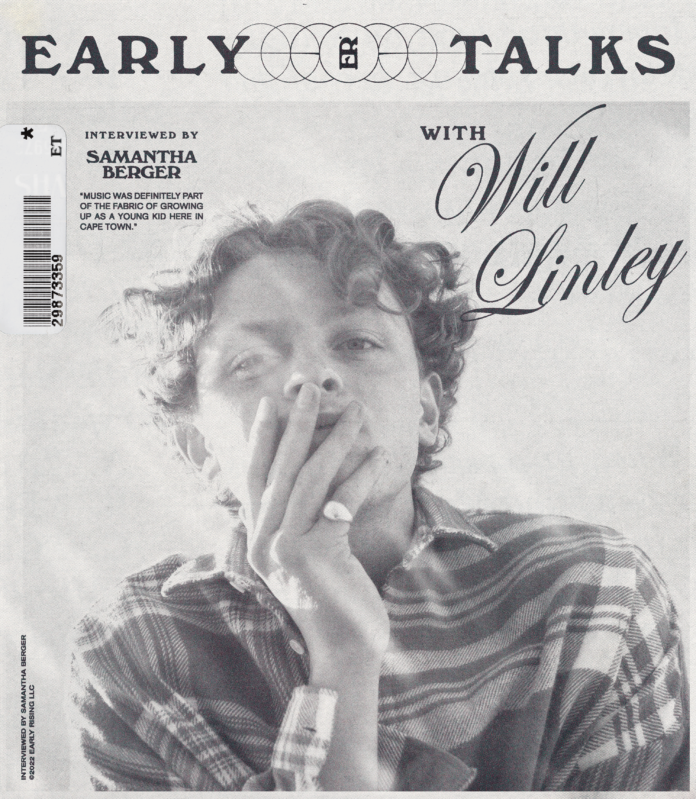 Will: I’m doing so awesome because I’m chatting with you and we’re doing this interview! I’m doing really really good. It’s summer here in South Africa, life couldn’t be any better – the sun’s out and it’s beach time – December and January are always really great in Cape Town.

Samantha: I am so jealous! What were you like growing up? Did you always have a passion for music?

Will: Yeah I mean I’m the youngest of four boys… a very chaotic household as you can imagine, but we grew up with music being kind of the center of everything. My mom played in a worship band when she was younger and used to play the guitar a lot when she was younger. My earliest memories are of sitting on my mom’s lap singing nursery rhymes with her. Then when we were sent to school, our parents really encouraged us to play instruments. I played the violin and recorder in junior school and continued to play the violin throughout high school. My other brothers took saxophone, viola, and things like that. Music was definitely part of the fabric of growing up as a young kid here in Cape Town.

Samantha: Wow you are very musically inclined. Were you always a songwriter?

Will: Oh no, not at all. I started writing songs when I was fourteen. I remember one of my friends was like “you sing, you might as well try to write a song.” I wrote one and it was horrific. I certainly was no Billie Eilish. But, I kind of continued to write because I always was intrigued by this music thing, you know? I always asked questions. I wanted to know what the world was like this world of writing songs and doing music. I put out a couple of songs in high school, they’re all very bad but the bug bit. I enjoyed it so much and I was just happy to sit in my room and write songs, try to get better, and hone the craft a little bit.

Samantha: Who were some of your favorite artists when you were younger and who are they now? What influences you?

Will: That is such a good question… I think (goodness) my earliest memories are of listening to John Denver with my dad or listening to The Dixie Chicks with my mom. My music is so far from their styles and genres of music. When I grew up, I listened to a lot of Ed Sheeran-type of stuff. I remember I don’t know how old I was, but that first album with “The A-Team” and all those songs on there like “You Need Me, I Don’t Need You.” I just binged that album, I thought it was so cool, and I was like “this guy is the bee’s knees,” he is so cool. So I listened to a lot of Ed Sheeran when I was younger. And then obviously your classics, like I always listened to the Now! Cds, that was huge, like “TiK ToK” by Ke$ha. I remember sitting in my bedroom learning the words to “TiK ToK.” But other than that nowadays I really love JP Saxe, Clinton Kane, Jeremy Zucker, and Chelsea Cutler. All of those artists, Julia Michaels, are just absolutely incredible.

Samantha: Are there any South African artists that really inspire you that we might not know about?

Will: 100% These two guys, Matthew Mole and Jeremy Loops, who are kind of like the guys I looked up to, and still look up to now. But when I was growing up, Jeremy Loops and Matthew Mole were kind of like these guys that were really making music work. It was big when the folk guitary acoustic genre was in, like when Passenger was crushing it and Ed Sheeran was crushing it. These two guys just smacked it out of the park and they’re still some of the best live performers that I’ve seen to date. People around the world don’t necessarily know about them. I really feel like Matthew Mole and Jeremy Loops are amazing. I went to see them live a month ago and it just blew me away, they’re just so good.

Samantha: Tell me about the day you wrote Miss Me (When You’re Gone)? What was your process like?

Will: I mean, this was at a point, so there’s this whole big story as to how I even got into music, but I met these two guys named David Balshaw and Bubele Booi. Awesome people and they were just kinda like mentoring me a bit within the South African industry and helping me a little. I was writing a lot with David at the end of 2020 because Bubele was actually in New York… and I remember going home after one of the sessions that we had on a Friday afternoon. I sat with this guitar loop that I found on Splice and kind of ran over a bunch of ideas in my head and came up with three completely different verse ideas. I remember sending them to David and going like, “what do you think of these?” Tell me which one is your favorite and then we landed on one that was cool. We kind of pulled on it and changed it and manipulated it a little, and ultimately landed with that first verse. I could have never predicted that the song would do what it has done. You know? For me, it was just a fun little song that I wrote literally sitting in this chair at my desk. I remember feeling excited about it because I felt like I was suddenly writing something new, something more mature, something exciting and not going like “oh girl I love you,” that classic like writing a love song or whatever. I think suddenly there was a sense of excitement, like “hey maybe we’ve got something here,” but trying not to get ahead of myself and see where the song would take itself.

Samantha: That is super inspiring and really great. If you had to choose your favorite line in the song, what would it be, and what does it mean to you?

Will: Oh my days. I mean, listen, I think we have to go with the ending of the chorus “I’ll miss me when you’re gone.” I think it’s like, what I have been so humbled by over the past three months, however long the song has been out, is how every person has a different perspective on the song. I feel like, I kind of stumbled on that phrase completely by accident, and I think that I have seriously had people come up to me who have lost loved ones and they say how much it means to them because they miss the person that they were when they were around them. For them, it is about losing an individual that is so close to them. I think it is just so inspiring and super humbling to see how different people were perceiving the song, whereas others would maybe go like “I broke up with my girlfriend, boyfriend, or partner and now I miss the person I am when I was around them.” I think that line just means so much to me because I certainly felt it when I lost this person that made me better. I think that it’s so interesting to see how this feeling of losing the person you are… around somebody else… is such a universal thing and lots of people feel the same way. It makes me kind of feel a bit more normal like it’s okay, everyone feels the same way

Samantha: Everyone does feel the same way. You are not wrong about that at all. Was your inspiration from a specific story or was it from a bunch of different experiences that kind of came together to form this piece?

Will: The main inspiration was a specific story. I met someone at the beginning of my varsity, the first year of varsity and I loved the person that I was when I was around her… she had to leave and I remember like once she left, I only wrote the song five or six months after she left. I remember just sitting in my room and kind of thinking about how I missed the person I was when I was around her. I was like wow, yeah, that is real and how I feel. It was very much about a personal experience.

Samantha: What are your upcoming plans when it comes to your career? Any new music in the works? Are you coming to the states? What is in store for you?

Will: (starts clapping) All the spice. Yeah, so gearing up to come to Los Angeles in early February and staying until the end of March, early April. I’m just kind of using it to have some meetings and just start planning for the future.. We’ve got songs in the pipeline that I’m waiting for the go-ahead. So yeah, we’ve got more music ready, we don’t just have the one song and we’re just going to take it day by day and see what happens.

Samantha: Are you just coming to L.A or touring around the states?

Will: Right now I think I’m just going to be based in L.A, but you never know… a little road trip never hurt anyone.

Samantha: Amazing. Anything else you’d like to say to your fans or anything I didn’t include that you’d want to speak on?

Will: I think the biggest thing is that  I could never have imagined I would be in this position today, and that’s something that is still so weird to me. If you had said ..Will you would have written a song and released it with such an awesome group of people, created a project, and done a music video, I would have said “get lost” and “get out of here.” I think that is so so humbling and exciting, and I feel really grateful to be in this position. Yesterday I performed at a gig in Cape Town and I had someone come up to me asking about releasing music and I think the biggest thing is, the thing that came to my mind is, don’t care what people are going to say. If you don’t want to release music because you don’t want to release it, then don’t release it because you’ve got to be happy with that project and happy with the piece of work that you’re putting together, but if you’re worried about what other people are going to say, screw that! It does not matter. Just do what makes you happy. Forget other people’s opinions with your music because if you enjoy that body of work, somebody else out there is going to enjoy it, and that’s the most important thing.

Samantha: Thank you so so much, Will! It was such a pleasure to speak with you today and I cannot wait to see where you go and what you accomplish.

Check out Will Linley here. He is someone to keep on your radar, especially now that he is teasing some new music on his socials!