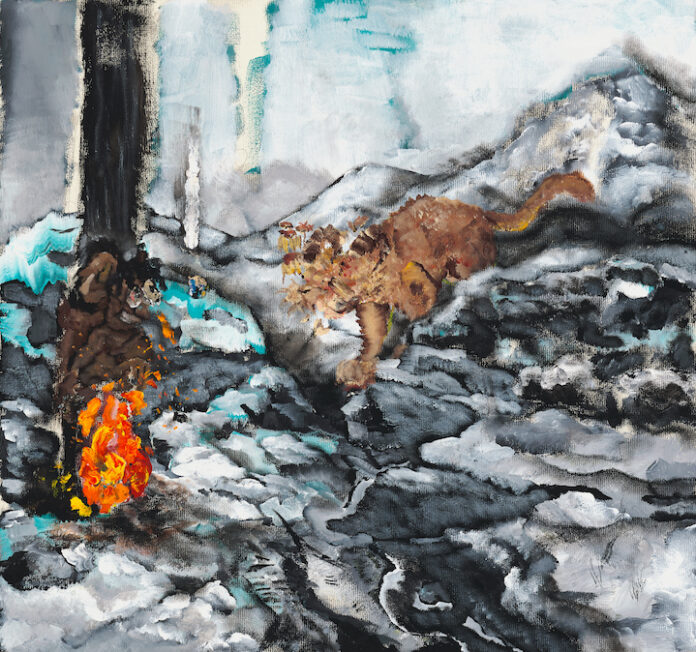 The last we heard from contemporary Hip-Hop duo KWAMZAY was on their debut EP Motherland! Released in June 2021 the 5 track project featured humorously insightful bars from Kwame Adu and soulfully detailed production from ZAYALLCAPS. Little did we know that the same week Motherland! dropped, KWAMZAY returned to the studio to create their sophomore EP Mountain. Eclectic, and particularly unique in subject matter and production, Mountain is the synthesis of Kwame Adu and ZAYALLCAPS’s talent with an added layer of artistic maturity.

Track 1, Get Like You, features warm and energetic production with braggadocious yet humble bars delivered with dead serious intention from Kwame Adu. Citrus, track 2, deviates from the initial vibes and utilizes unorthodox, spectral production from ZAYALLCAPS to complement the sour nature of these lyrics reminding you that there’s hella lemons before there’s any lemonade. Peanuts, my personal favorite track, features a soulful loop on the production and insightful lyrics that make you double take. Kwame mentions “Pray for crack addicts, the joke is that it could’ve been us”. With sagacious levels of insight that surpass their years, KWAMZAY create their music with the wisdom of a past life. Track 4, I’m Still Alive! Is an outlier instrumental that is heavily influenced by UK jungle with drums make you feel like a powerpuff girl. It’s also the only track produced by Kwame Adu- absolute banger. Lastly, track 5, 2 No End, meticulously concludes the project with another soulful loop and bars from Kwame that perfectly balance humor with extreme resolution such as “Bout my business like a pixie, Timmy Turner all buck upfront be careful what you wish for.” 2 No End is also the only track with a feature, embracing a verse from Young Wabo that punctually wraps up the entire project.

With five tracks clocking in at about seven minutes, Mountain delivers a fresh take on contemporary hip-hop that demonstrates a level of genuineness that’s hard to come across in the age of the internet. Not a single lie is told on this album and all the flexes feel organic. Simultaneously, the project is influenced by the staples of an older GenZ childhood: cartoons, mid 2000’s internet, and limitless access to a composite of music across different eras and regions. All these combined with KWAMZAY’s vision equals Mountain as we know it.

Much like its name suggests, Mountain is an EP that is extremely grounded in its sound and undeniably sure of itself. Not only is there an inherent feeling of success and wellbeing throughout the production on the album, but the sentiments behind the lyrics feel particularly down-to-earth. All five songs on this project leave no room for anyone to second-guess that what they’re hearing is set in truth.

As their sophomore EP, Mountain shows a lot of potential for bringing something new and unique to the table. What I find most inspiring is that this may not even be KWAMZAY’s peak. I highly recommend giving this project a listen on any streaming platform. Also, don’t forget to check out some of Kwame Adu and ZAYALLCAPS’s personal projects wherever you get your music!

Alfred Bordallohttp://alfbordallo.xyz
based in LA | photographer
Previous articleDLG. / Enfield
Next articleQuinton Brock // There For You