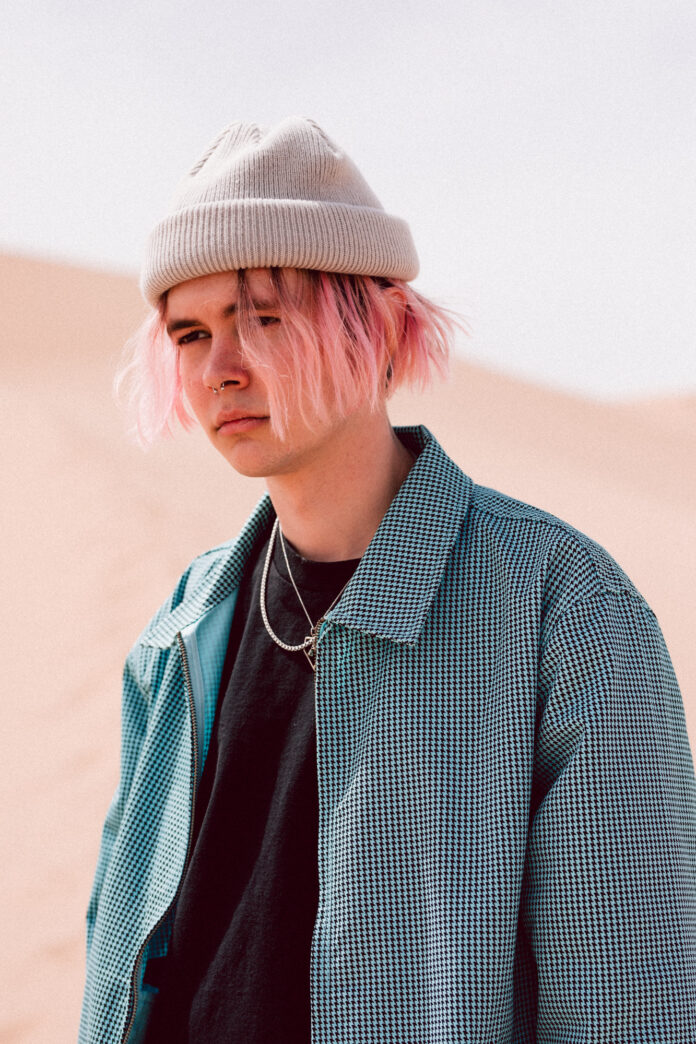 After teasing the song on tiktok through december and january, Arizona based artist/producer monty.pk released his song prism on 2/2/22. Blending hyper pop production elements with contemporary alternative pop songwriting, the track falls neatly between the two genres. Landing placements on both Spotify’s hyperpop and anti pop editorial playlists, the track has quickly jumped to the number one spot on monty’s discography. prism is a chaotic yet poetic anthem about gaining a surge of manic confidence within the context of a toxic relationship. Sonically, the record reflects the emotions of this sort of relationship: exhausting and exhilarating, slightly irritating yet also obsessive. The track is filled with clever, angsty, accessible lyrics like: “You left a prism in my car. I’m gonna crash it in a lake” and “Baby you don’t even like me, all I do is piss you off.”

With other notable releases like tmb & motions, monty.pk is clearly paving his own space in the alt pop world and is definitely an artist you should be paying attention to this year.

I got to chat with monty about his new song prism and more! get to know monty.pk with our q&a!

HANNAH: monty, i’m so obsessed with your new song prism!!! Tell me a little bit about what inspired you to write it / how long the process took?

monty: When I made this song, I was listening to a lot of people around me yelling over beats, and the initial inspiration was just to try it myself. I went through a couple of song ideas over a couple days and eventually landed on prism. After posting it online and showing some friends, everyone was encouraging me to finish it, so I thought up the rest of the song the next week. The writing process was a lot of trial and error, rewriting and new beat switches until it started to click.

HANNAH: When did you first start making music & how did you start?

monty: I was in piano lessons when I was really young, my school offered them alongside the band program. I didn’t stay in those lessons past 6th grade, but I did have garageband on my mom’s ipad that I continued to play with. I eventually asked my parents for logic when I was 16, and started to write and produce.

HANNAH: Do you play any instruments / do you produce your music as well?

monty: Yes!! I mentioned piano, but I don’t really play much anymore. I mostly play guitar now, I went through a shoegaze phase in highschool that got me into it, I love the textures you can create with it. My music is all self produced, although I often have friends help me finish the details. prism is all me though (aside from the mix from Mike Mroz)!

HANNAH: If you could collaborate with any artist who would it be and why?

monty: Flume, I think. That answer changes all the time but Flume will always be one of my favorite producers and artists. If he ever made another experimental tape, like “Hi This is Flume”, it would be my dream to be a part of it. That project still inspires me.

HANNAH: I saw you’re playing two shows in the next few months & I’m super excited for you!! Have you ever performed live before or will this be your first time ever?

HANNAH: I feel like this song could have some crazy visuals to go along with it.   Are you planning to do a music video for it anytime soon?

monty: There are some ideas being kicked around, but nothing set in stone. We’ll see if it falls into place.

HANNAH: I really love your songwriting and am curious to know what are your favorite lyrics you’ve ever written?

monty: prism’s hook is easily my favorite (the pitched up part):

“I see right through your game, You left a prism in my car
I’m gonna crash it in a lake, So tell me if it got you far.”

In the past I’ve struggled to make catchy music out of more tangible ideas. I think that’s the first time I really nailed it. I said something literal, but it still feels clever. It’s hard to explain, but I’m very proud of it lol.

HANNAH: What does the pk in monty.pk stand for?

monty: There’s no real answer, I change it every day. The name came from Pokemon Red and Blue, there was a “pk” key on the keyboard when you name your trainer, so i was montypk. It’s kinda stupid.

HANNAH: Who are your biggest influences sonically?  (lyrically and production wise if they’re different)

monty: I can name a few with production – EDEN and Joji were the artists I was imitating as I learned. I listen to a lot of different music right now, so it’s very jumbled at this point. prism was inspired by Internet Girl and some older dltzk stuff, probably.

HANNAH: Do you have any other releases coming up?

monty: I’m working on a handful of things, I’m gonna pick one out soon for the next drop. I’m indecisive, but it’ll be soon.

HANNAH: What are you listening to right now?

monty: I’m falling back into my shoegaze, postmetal phase right now. Holy Fawn is one of my favorite bands, they are from the Phoenix area too.

monty: I hope to put out a lot more music this year. I spent a lot of last year playing with different sounds and I’m starting to narrow down what I wear best. I don’t have a lot out right now, so a lot of it is just the desire to plant my feet in music and build my identity as an artist, what I love and what I can do.

monty: Come out to the shows!! There’s one in in New York on March 23rd at The Knitting Factory and one in LA on April 5th at The Echo.

Be sure to check out monty’s music below and keep up with him on instagram, tiktok, and twitter.

South Dakota native and Nashville based singer-songwriter Tiffany Johnson, is the creator of an incredible, catchy, and relatable track that has been...
Read more
ReviewsQ&ARising Release