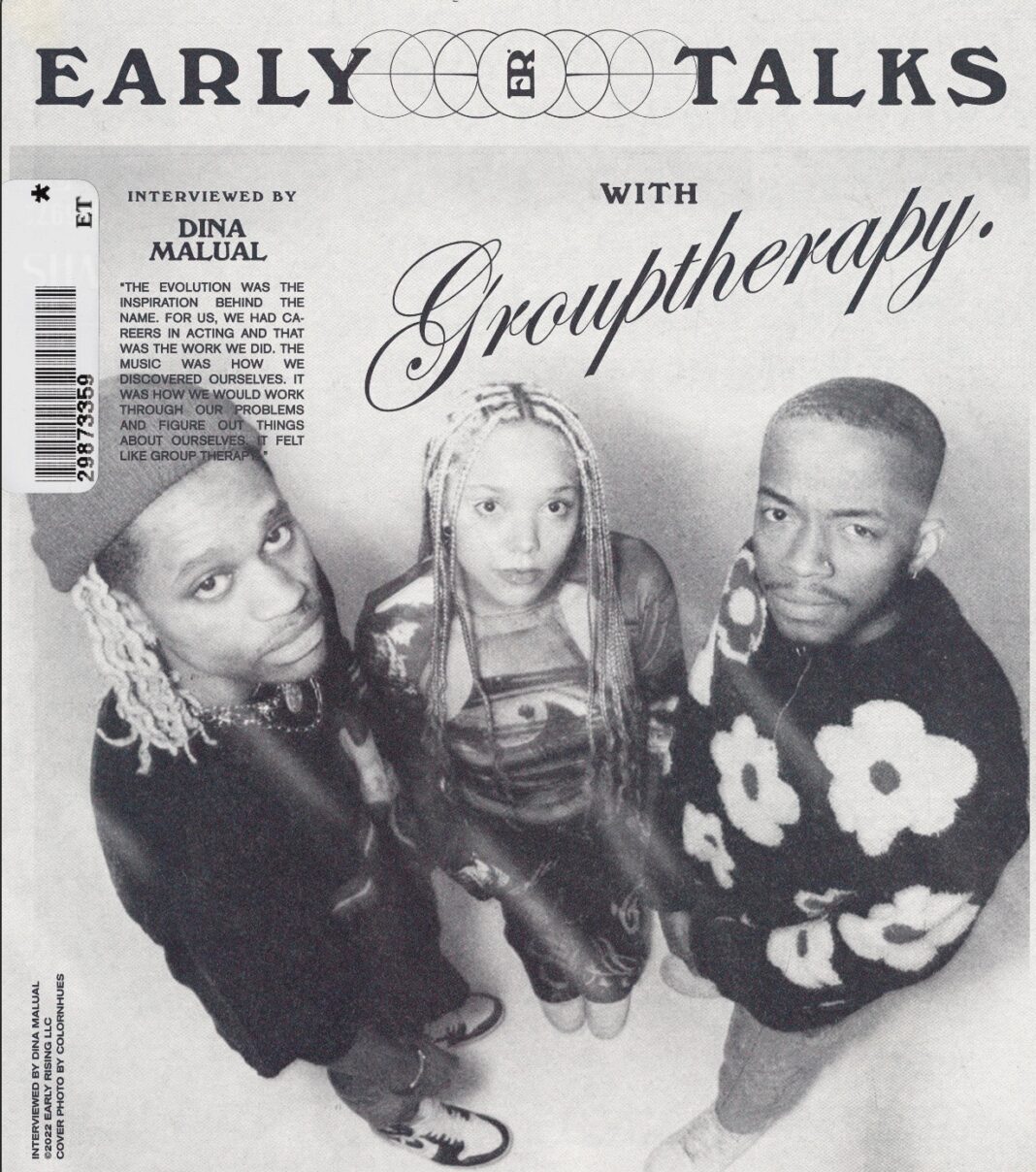 Dina: Before we dive in, how’s everyone’s day?

Jadagrace: My day has been great. Honestly, I’m just resting up.

Dina: Glad y’all are chilling. I know you guys are based in LA, can you tell me a little bit about how you guys got there? Are you originally from there? You know, what’s everyone’s background.

Jadagrace: I’m actually the only one from LA. I’ve been here my whole life. I met them in like 2013 or 2014. Coy (SWIM) had just come out from South Carolina and I’ve known TJ for a while.

SWIM: I was born in South Carolina, raised on the east coast, kind of went back and forth. I did a lot of child acting, which is what sort of took me all over the country. I met TJ early on before I met Jada. He and I just kind of met through mutual friends in the industry. We had worked with a lot of the same people. I remember the day I met Jada. I had just moved to LA, and TJ invited me on a double date, and his date was Jada. That was actually the first time we all met.

TJOnline: I’m thinking back on it. It was a horrible day. Why did we take y’all to see The Fast and the Furious?

Dina: OMG! That’s one way to meet. You were all child actors/stars, you know, we got Disney, Kidz Bop, and Nickelodeon. So, whose idea was it to create grouptherapy. and what’s the meaning behind the name?

SWIM: We just watched the genius documentary the other day, and that first episode reminded me so much of TJ because it’s how he started. He started out as this insane producer and wasn’t playing his beats for anybody but us and like the homies. I was super excited to rap, and I wanted to make something, so I pulled up on TJ and I was like, “bro, let’s make a mixtape.” Jada helped, TJ helped, and another one of our homies helped us, and we kind of just locked in every night.

Jadagrace: We were in the studio until like 5 in the morning. It just felt right, so we kept making music together and eventually we had people come in and they were like, “you guys are crazy, you should like do something.” TJ came up with the genius name behind grouptherapy. It was actually like the first idea he had.

Dina: Tell me a little about producing and not wanting to show your work to people outside of grouptherapy.

TJOnline: I had been producing for a few years at that point, and I just didn’t feel confident about it. I was doing it and I love to do it, but I wasn’t like going out to people being like “if y’all need a beat, I got you.” There was a group chat that we had with all of our friends, and I would make something and send it in and be like, “what’d you guys think?”  But it was really when Coy (SWIM) came to me, and was like, “hey, I want to do a mixtape. I don’t know how to do it. I don’t know how we’re going to do it, but you’re good at what you do, and I think I’m good at what I do. So, let’s make it happen.” Making that mixtape was the thing that really gave me the confidence to take music seriously. Because we made something that was way more than the sum of its parts. From there, I just kind of got more and more confident and I actually started making stuff for everybody.

Jadagrace: I reached out to him [Dee Lilly] end of 2019. I actually had been doing music my whole life. I had been through like a lot of label stuff when I was young. I was going through a bunch of stuff. I came to TJ and I was like, “I want to start making music that I like. Let’s just keep it in the garage and we don’t have to release it. Let’s just see what happens.” And I ended up leaving my label and that’s when we started grouptherapy. We were like, well, now we can actually release some stuff.

SWIM: I think the three of us really pride ourselves on not really putting pressure on ourselves to go anywhere and be anything that we’re not. You can hear the evolution and the growth in us.

TJOnline: The evolution was the inspiration behind the name. For us, we had careers in acting and that was the work we did. The music was how we discovered ourselves. It was how we would work through our problems and figure out things about ourselves. It felt like group therapy. We would come together, talk about how we were feeling that week, and work together to try and make it fit in a way that fit that person.

Dina: I do want to take it back. I think Jadagrace was the one who said it. You said you guys are more of a collective as opposed to a group, tell me a little more about that.

Jadagrace: Yes. I think that when we started, we were just, like you said, figuring out who’s on what song. We realized I’m the only person on “watercolor” and TJ is the only person on “found me”, so, we were like, okay, we’re clearly not a band, nor a group. Most people would prefer us being a group because that’s the easiest thing to digest, but for us, it doesn’t feel natural. We’re different. I think we do much better when we don’t put that pressure on ourselves to always be on one song together and to be this band. It just has never felt right for us. So, we say we’re a collective and a label.

Dina: I like that mindset. I’m excited for the new project! Could y’all tell me what’s different about it?

SWIM: I feel like the biggest difference people are probably going to hear and feel is maybe subject matter. I feel like we’re a little more focused on this project.

TJOnline: If I was to use two words, it’d be simpler and darker.

Dina: Okay, now I’m even more excited, but I’ll have to wait. Tell me about the next single, “Risky”

SWIM: “Risky” is one of my favorite records I’ve ever done.  It’s something that I take pride in, which is just rapping. I just really, really love to rap. The thing that I love about this record is it actually took me like two years to make. I made the first half, and I didn’t know what I wanted to do with the second verse for a while. I remember I was in New York listening to the beat and the whole second verse just came to me. I wrote it down and I didn’t record it for another like six months.

Dina: That’s a long time, wow! What’s next for group therapy? What do you guys want to accomplish?

Jadagrace: I think the goal is to build our grouptherapy. platform, but also be established as individual artists. It’s already been like two years, and we’re just now really getting our feet in.

TJOnline: What I would hope for what’s next is all of us digging deeper into who we are and making that more apparent.