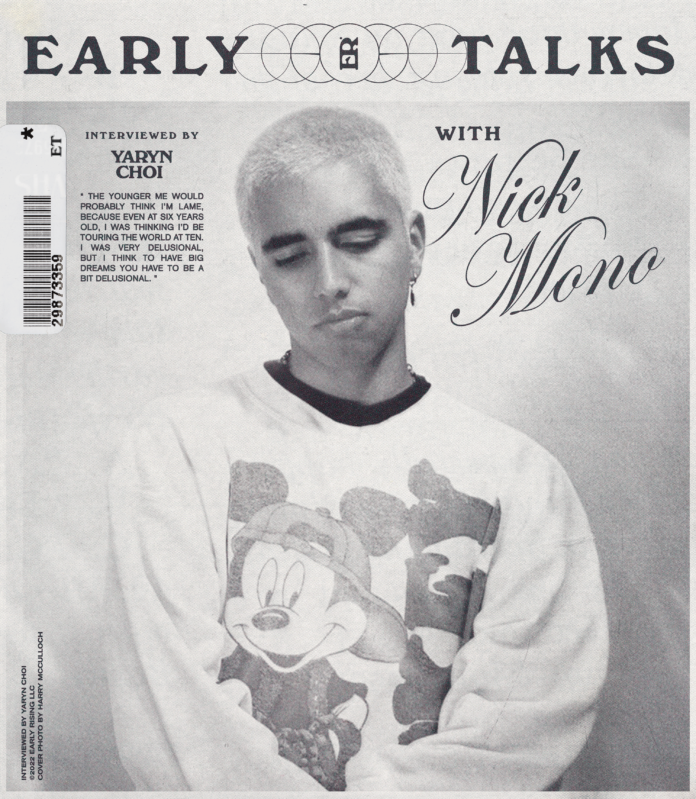 YARYN: How are you feeling now that your EP release is just a few days away?

NICK: I’m feeling good. I’m feeling excited! I’ve realized that making the songs feels a lot more gratifying than actually releasing stuff, but I’m always excited to release my songs, and this time, people get to hear a full body of work, which I think is important so people can listen through everything and see connections between different songs they’ve already heard. I’m excited for people to be able to hear it in its final form.

Is there any anxiety for you when it comes to the idea of releasing and deciding what’s ready or not?

With this EP, these aren’t songs that I’ve just made last month and thought “oh I really wanna release this, I’m gonna put it out now.” They’ve all kinda been through lots of different stages in terms of their development. It’s been a long process to get to the point of releasing them, and I guess, with that come some nerves as to how people might receive it and expectations they might have had but, in general, I think you do sort of have to just disconnect from any sort of outcome or expectation.

Before we talk more about future stuff and the EP, I know that you’ve been playing music for a very long time and releasing music for a while, but can you tell me—going way back to the beginning—what made you fall in love with music and decide that this is really what you want to do?

Some people have this sort of moment where it hit them, but I think for me, it feels like something I’ve always known I wanted to do. I think I was too young to remember myself properly falling in love with music and the idea of making it, but it started from a young age, hearing the different music my parents would play. My dad was into rock and my mum was listening to more R&B, pop, and even some hip-hop, so from an early age, I was hearing a lot of that stuff in the car and really liking it. When I was quite young, I was finding artists through Disney Channel; I was watching that and going “oh my god I love a lot of this pop-rock sounding sort of music.” That was my source of finding new shit when I was only four or five years old, and I think I was curating a taste. I got a guitar when I was five years old and started to write random songs and play fake chords, and when I was six, I’d talk to my friends and be like “okay guys, let’s make a band. We’ll do this, we’ll do that.” They’d just go along with it, but to me it was always serious. I don’t even know what I was thinking, talking about going on Britain’s Got Talent at six years old, but then it just never really left me. It was always something I was passionate about.

You’ve said that “All That You Do” is inspired by D’Angelo’s “Voodoo,” and of course ‘Effy Stonem’ is related to the show “Skins,” but with this EP, would you say the tracks have a lot of outside influence or is it more just related to your personal experiences?

Sure, I think that all the different songs have their own places and artists that they’ve pulled from naturally, just from being a fan or hearing things I think are cool and naturally trying to implement that into my stuff in my own way, but I think it is more the latter. I think it is kind of a culmination of writing about life experiences and things that I was feeling at the time. When I was fifteen or sixteen even, I was writing songs and producing them out trying to be like my favorite artists, but I think, in the last few years, I was able to find a sound that felt natural to me and it’s definitely become more organic.

“Rusty” was one of my favourite songs to skate to in the fall here, because it really fit my environment. Is there a specific way or space you’d want your listeners to experience these songs? On road trips or alone in their rooms? Full blast or at a chill volume?

When you said road trips, I was thinking of driving in a car and listening to it. I think that’s because it’s my favorite place to listen to music. There’s just something about being in a car which allows me to disconnect, fully embrace the music and not feel like I’m sitting in the same place. The whole concept surrounding this project was different transitional points in life and how you deal with relationships through them and shit, but because of that, I think that I’ve always thought it would be really cool to know that people are listening to my music with their friends in the car and making memories with my music in that way.

Oh shit, that’s a really cool question. I’m really excited for people to hear “The Way To My Heart” as a producer, because it sounds quite minimalistic and like there’s not much going on. It’s mainly just guitar and vocals but, when you peel back the layers, there are a lot of fine details in the production, which I’ve always found cool in as a fan and listener. I could also say that one for writing, because it’s a really intimate love song and probably my favorite on the project, but “Anywhere In the World,” too. I wrote that one because I thought it would be cool if I were able to listen to that song when I was feeling what I was feeling at that time, and now it exists and I think that’s really cool.

If your younger self could see you right now, how do you think he’d react? Do you think he had bigger dreams or would he be stoked with where you are?

I think he’d think I was so fucking lame. Again, even at six years old, I was thinking I’d be touring the world at ten. I thought that was possible and that seemed fair. I was so delusional—I still think I am, but I think to have big dreams you have to be a bit delusional. At the same time, though, I think I’m further along than most other people would have expected at this point, so I think it’s great to recognize how far I’ve come, but still not get complacent. I still want to push forward. I don’t know if you’ve seen the Kanye West documentary … there are a lot of moments where he’s talking to the camera about how far he’s come, but at the same time, you see, he still feels really unfulfilled with where he’s at and wants to go further. I think it’s really cool to see someone like Kanye West, being able to acknowledge that, and I think that’s how you’re always gonna feel as an artist with a big dream.

Describe the EP to me in five words or less.

Oh, I’m gonna think about that for a sec. That’s so hard. I’d say self-aware, which is two words. Introspective. Those are quite serious words I think so, maybe I’ll say fun, as well. Fun. This sounds so corny, but I was gonna say journey. You give me one! What would you say if you had to give it another word?

Okay, I have some quickfire ones. Do you prefer sweet or salty?

Yeah, I saw it in the camera!

Coolest article of clothing that you own?

I just got this t-shirt that I saw at some thrift store. It has Louis Theroux’s face on it and it says “We’re gonna get Theroux this.” I thought that was cool, so I’ll say that.

Top three influences? They don’t all have to be musical.

Kanye West, Robert Pattinson, and I’ll say Kevin Abstract ‘cause he’s a big part of what I do.

Would you rather have hands for feet or feet for hands?

That was fast! Why?

Maybe this ties in with your influences, but dream collaboration?

In the vein that this is Early Rising, who is your favourite new artist?

Nick Mono’s debut EP, The Sun Won’t Stay After Summer, will be available to stream on all platforms this Friday, March 11. Make sure to check out the singles he’s already released and watch the music video for “All The Money” here:

Before Jeffrey Eli was making pop music to break the gender binary, he was a pre-teen singing online from his hometown bedroom...
Read more
Home FeatureInterviews