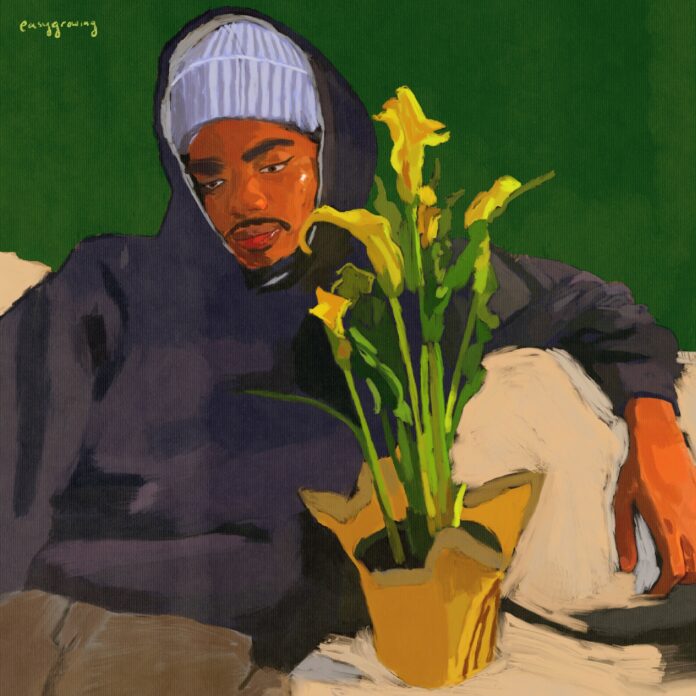 Each year, around this time, the final remnants of Winter begin to fade from view. Temperatures gradually increase with each new day, parking lot snowbanks no longer dwarf commercial vehicles, and plants once dormant emerge anew. These are all examples, found especially common in the North-Eastern portion of the United States, of Spring’s inevitable return. While collecting showers in anticipation of blossoming flowers, it’s difficult to feel anything but optimistic for what lies ahead. This time of year is also specifically known as a period of new beginnings, rebirth, and growth. Just take 24-year-old DMV born and raised Kinrose for example. His debut EP “easygrowing” arrived earlier this week containing tales of growth as an artist and individual, and is one of the best musical introductions to Spring available.

Kinrose kicks off the spring-themed project with focus track “aloof ona roof”, an addicting showcase of his versatility and storytelling abilities. With a laid-back demeanor, he beautifully harmonizes his desire to let go and loosen up on the hook. His soft crooning is only interrupted by a concise verse justifying his departure from the nation’s capital, and what resulted in this decision being made. Featured artist Unwanted delivers an equally potent effort, complimenting Kinrose and completing “aloof ona roof”.

Immediately following “aloof ona roof” is fan favorite “profile”, a bright, upbeat Maryland love song that highlights Kinrose’s creativity and wordplay. On the track’s chorus, he sings from the perspective of an anonymous female as she rediscovers his social media page. He recounts, through her eyes, that after they began talking the lack of distance between them prompted the two to visit one another. During each subsequent verse, he pivots to his own thoughts and emotions and describes the grip she possesses on his heart with bouncy lyricism. Kinrose’s cleverness shines when he uses multiple metaphors to describe certain features of this unnamed woman. Amongst other things, he compares her walking speed to that of a terrapin and notes her need for “‘Rose on the team” is quite similar to that of seasoned NBA coach Tom Thibodeau. Although we wouldn’t recommend comparing your significant other to a turtle or 64-year-old man, it’s the use of quirky metaphors like these that truly set Kinrose apart artistically.

The remaining 3 tracks on the EP: “sowing”, “pass today”, and personal favorite “cloudy air” each continue the overall Spring theme of the project and provide Kinrose an opportunity to dive much deeper into how it felt to enter adulthood in the DMV area. As the EP plays through, infinitely alternating cadences and head-nodding hooks assist in painting vivid pictures of his early life. Within five punctual records, “easygrowing” displays the innovative skills Kinrose has as an artist and includes descriptive personal content. It’s arguably the perfect debut EP and is accompanied by two music videos, both of which are available now. So, without further ado, ring in the Spring season and hear just what Kinrose brings to the table through the streaming link below!