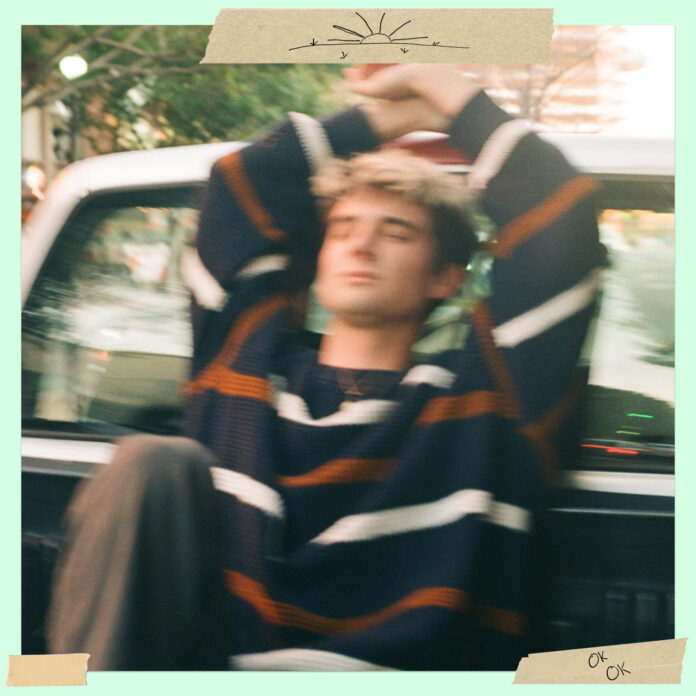 Arizona based artist danny orange returns with his second single of the year: say it twice; a laid-back acoustic guitar based alt pop track about realizing you’ve been wasting your time waiting around for someone & coming to terms with the end, not due to any bad blood, but simply out of respect for yourself.

Also known as Daniel Jordan K, Danny has already made a name for himself in the industry as the director for Overcast; directing music videos for artists like brakence, Savage Ga$p, glaive, ericdoa, Quadeca, and more!

Influenced by artists like jack johnson, dominic fike, and dijon, danny’s delivery feels effortless & refreshing. With a lot of other releases on the horizon, Danny is definitely one you want to keep up with this year in the alternative pop space.

HANNAH: DANNY!!! I’m loving say it twice so much!! Going to start off with some questions about your life and then we’ll move into talking about this track!! First off, Where are you from? & where do you live now?

DANNY: i was born in el cajon, san diego and moved to phoenix when i was 6 and I still live in Phoenix currently.

HANNAH: When did you start making music and what inspired you to start?

DANNY: when i was 10 i got my first guitar, & i started writing music as soon as i was able to play it. i ended up writing my first song ever “my lucky sweater,” then performed it as an opener for the beach boys when i was 11. when i was 13 i stopped playing guitar because my focus shifted to pursuing golf at the time.

as the end of my high school days approached, it was right around the time uzi and cart started popping off. i wanted to make beats like that at the time. i learned how to make beats working as a security guard for this community pool cause no one was ever there, and most the time i would just fall asleep and wanted to be productive. not gonna lie the beats i made then were not good; i didn’t know what i was doing so i stopped touching music unless i wanted to make a freestyle with my friends. around this same time I started shooting music videos. i met tuxx,when I was 20, and we started making music together. he was a big motivation for me cause i was a fan of his music before we had made anything together.

at this time, i was just having fun & I didn’t take music serious at all. i also realized that i found it really hard to come up with things to write about. I almost felt numb in a way. i had been in a relationship with my gf at the time for 4 years. we ended up splitting up over the course of 2 years, & it was really emotionally draining for the both of us. I would describe it as the best/worst feeling ever knowing we couldn’t be together but also knowing that i would feel more like myself being independent.

6 months from being officially out of the relationship, i started to feel like i had stuff to write about. however, it didn’t feel the same when i went to record, i was used to messing around all the time and for the first time, i had a feeling of vulnerability within myself that i used to. i started writing music strictly on my guitar again, just how i did as a kid. I started composing an entire song with my guitar and no drums, then adding the drums and everything at the end. i would say it wasn’t the relationship that inspired me to make music, but the feelings i experienced within it and outside of it while at the same time learning about myself and who i am.

HANNAH: Who were your early musical inspirations?

HANNAH: Who are your biggest influences sonically right now?

HANNAH: Where did the name danny orange come from?

DANNY: i used to live on “orange street” & its my favorite color!

HANNAH: Tell me a little bit about your inspiration for say it twice?

DANNY: say it twice is about the regretful feeling of wasting your time waiting around for someone, but turning that energy into something to motivate you to keep going. speak your mind always; at the end of the day if you are going to hurt someone you can’t be mad at yourself if you’re being honest with them.

HANNAH: What are your favorite lyrics in it?

DANNY: “if you got sumn to say… then say it twice“

HANNAH: Will you be dropping a music video with the single as well? & if so are you directing it?

DANNY: no music vid for this song but for the single following the next there will be a video piece!

HANNAH: Are these two singles leading to a larger project?

HANNAH: Your last two singles feel like a slightly different direction than your first two, what type of songs will be included on the project?

DANNY: way back 2 you is the hype song on the project, say it twice is more of an introduction to the overall sound of the project. me and saiah have a song on there as well as me and frazier who im super excited about. she just started making music; her first ever song was one we made together and till this day it’s probably one of my favs i’ve made personally. but yea a lot of acoustic/real sounding instruments.

HANNAH: If you could direct a music video for any artist in the world, who would it be and why?

DANNY: this is such a hard one ahhhhh… dijon would be legendary! i feel like our chemistry together music wise and visually would compliment each others.

HANNAH: Do you have any shows lined up for the year, and if not are you wanting to play live anytime soon?

DANNY: i’m super excited for the day it happens. for now i’m just letting that stuff happen naturally, i def want to have the whole project out tho before i do my first show.

HANNAH: What are your favorite lyrics you’ve ever written?

DANNY: “seasons change, it ain’t change the way i feel about you“

HANNAH: I know a lot of people who read this are familiar with overcast and your insane eye for directing.  How do you balance directing and your own project?

DANNY: directing is something i just enjoy doing, its fun and wakes me up with motivation. it’s the same with music. i just love to do both so that makes it easier!

HANNAH: What are you listening to right now?

HANNAH: Who are some of your favorite super underrated artists that we should be listening to?

HANNAH: If you could only listen to three albums for the rest of your life, which three would you choose?

DANNY: in between dreams by jack johnson, circles by mac miller & blonde by frank ocean

HANNAH: Do you have any other hobbies outside of making music / directing?

DANNY: i love golfing, i play every two weeks with my dad

HANNAH: If you can only choose one, is there a specific music video you’ve directed that you’re the most proud of?

DANNY: i’d say the “maxime – the apathy song” video was my favorite one. from what the treatment looked like to the video being finished is perfectly identical. i was very proud of this one.

DANNY: my goal this year is to drop a song every month until the entire tape is out. trying my best to hold myself accountable! at the same time i wanna take more time on the videos. i love the process of hanging out with the artist and getting to know them before we shoot.

HANNAH: Anything else you want to say / add?

DANNY: shoutout my boy harrison (mostlyeverything) for mixing everything on the project <3 and i wanna say thank you hannah for making this so much easier for me!! i preciate you sm <3

Be sure to stream Danny’s music and watch his latest music video below! You can also keep up with him on instagram, tiktok, & twitter <3