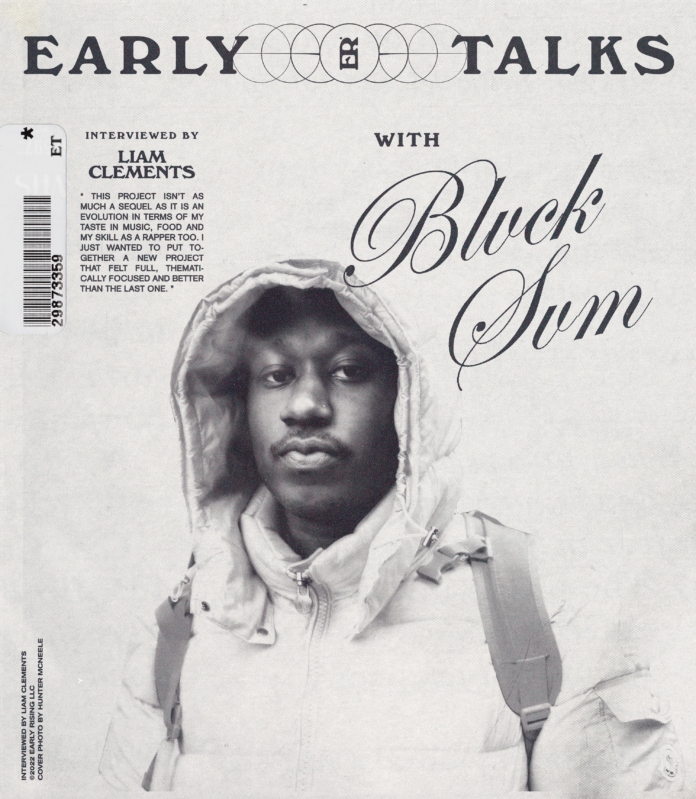 This past week, I had the pleasure of getting to chop it up with the one and only BlvckSam. Over the last year, BlvckSam has released an abundance of different singles and projects demonstrating his passion and commitment to his craft. In 2021 alone, he released over twenty five singles as well as an EP. With this type of output, its no wonder that we are seeing BlvckSam gaining the traction he has within the last few months. Exhibiting an distinguished and evolved sound from previous projects, BlvckSam just dropped his newest EP “fiftypercentgratuity”. We sat down to reflect on the project and where he is currently at in his career.

How are you doing? What is going on in your life right now ?

I’m cool. Currently just getting back in routine of getting to the gym, lifting and playing basketball. Feeling real good today. Hit some stream milestones. (five million streams on Bleach and one million streams on “Gristle”). I feel like I’m moving in the right direction and it’s a nice feeling to have when a lot of times things haven’t felt as certain or positive music-wise.

Where are you from? Could you give me some of your background for fans who might not know of you?

I’m from South Florida, in the suburbs about thirty minutes north of Miami. I started rapping in high school. We would have Freestyle Fridays in 9th grade. However it wasn’t until I got to college at University of Chicago that I started taking it seriously. I performed at an open mic near the end of my first semester and the performance felt like a near out of body experience. That’s when I decided to pursue rap as more than hobby. Now I’ve been rapping for about 7 years.

Did your upbringing/childhood play a role in your musical pursuits?

Florida played interesting role because I feel like the type of people living in Florida played a role in my music making. Florida is filled with leisurely people. No ones really in a rush because its so nice out always. I wasn’t super familiar with all of the other Florida rappers like Kodak, Denzel curry X or Ski mask but I knew there was strong underground. When I think about the music I make now, it reminds me of how people move in Florida. Taking your time, very reserved/laid back. In Chicago, however, its different because its colder and people don’t take their time as much. Chicago has so many different music scenes, its hard not to be inspired. Also everyone is really supportive here, people trying to put you on between photo shoots, video shoots, and shows. Its a level of camaraderie that I haven’t experienced anywhere else and that’s definitely influenced me a lot.

What inspired you to pursue music? What makes you most passionate about being an artist?

My decision to pursue music became clear to me near the end of my first quarter of college in Chicago. I attended an open mic and it was my first time rapping in front of a crowd. I was really nervous. I didn’t know was supposed to memorize my lyrics so I had my lyrics on a piece of computer paper with the lyrics typed. It was all crumpled up and my hands were shaking. It was very nerve-racking. But once I hit my first punchline, I settled in and in that moment, I knew that this was something I wanted to continue to take seriously.

How would you describe your style/sound as a rapper?

I would describe it as reserved. I don’t do too much with my voice. Its pretty bare bones production wise. Ive tried the auto tune stuff and all that but it wasn’t really me. It took me a while to figure out my style and ultimately I just decided to rap how I talk because I feel like that was most authentic to me as opposed to the faster, trappy sounding stuff. Once I found my own sound it turned out it was kinda just me talking. Real laid back.

Based upon the first two singles released off of the EP there were clearly some cuisine based influences in this EP. Could you speak to that a little bit?

Yeah! In December of 2020, I released another cuisine themed project titled “Carpaccio”. Food is just something I genuinely enjoy rapping about. I feel like a lot of people don’t rap about and if they do, they don’t do it well. It’s not necessarily a lane, but still something Ive enjoyed and I feel is cool to rap about. Although this project is definitely different from the previous because from December 2020 to now, I feel like I’ve definitely evolved a lot as an artist and a person. A lot of opportunities have opened up because of music, more financial stability so exploring new food, new restaurants and new experiences I wasn’t able to have before. This project isn’t as much a sequel as it is an evolution in terms of my taste in music, food and my skill as a rapper too. I just wanted to put together a new project that felt full, thematically focused and better than the last one. I wanted to mark the progress that I’ve made since then.

What would you say was the inspiration and or muse behind the new project?

Action Bronson is always a rapper that inspires me when it comes to the food rapping and luxury rap. He has a pretty unique style to me in that its very nonchalant. Especially in the way he talks about his life experiences and the way he describes food and stuff. From how he talks about things from food to his clothes, to traveling experiences, its super cool to me. He’s probably my biggest influence in terms of these two projects but in terms of delivery and cadence, Valee also a big influence. He is probably one of my favorite rappers. He carries that energy of just being very unbothered and he describes things in a very plain way which I think can be taken for granted. He finds a great balance between saying things straight forward while still making it interesting and captivating.

Does this project convey your growth or how you evolved in your sound as an artist or overall as a human being?

I think it does because I am in a different space right now than I’ve every been in terms of music I’m making, the process being as streamline as it is, having money to live on and invest back into my music. I’m now making music full time and that’s been a very different experience. Most of my days feel very differently structured than what I am used to. I feel like all this is forcing me to grow as a person because I’m no longer working a job where I clock in and getting paid for x amount of money for working x amount of hours. So now every move I make is not just for my love of the music but also to pay bills, pay for ads, or pay for music videos. It’s almost nice having the extra pressure on me because it helps me to execute better. I feel like I’ve been executing at a much higher level the last few months because I haven’t had that security net of a regular job to lean on and that has definitely influenced the way I make music and I think this project reflects that

What was some of the behind the scenes work that went into making this project possible? How did you connect with Sebastian Kamae ?

Sebastian and his homie King Khamen produced the entire project. I think King Common produced four of the tracks and Sebastian produced “Chimichurri” by himself. I connected with Sebastian through social media via his manager who asked me if I wanted to get on this song of his. I didn’t know who Sebastian was, I never looked up his socials or Spotify. I just thought the song was cool and so we set it up, I recorded it and got my verse in. The song, “texture” dropped sometime around March 2021. We kept in touch and at the end of last year he let me know was gonna be coming to Chicago for a few weeks to work. He’s from the Netherlands, so because of the pandemic we had never gotten to link in person. We finally linked in person in December and the chemistry was there automatically which was really cool. We started working on some songs immediately and we knocked out two tracks from scratch in our first session. We worked a few more times after that and decided to just make an EP. We decided on 5 songs and before he left it was about 70-80% done. I finished up the last two songs shortly after he left and that was kinda it. then we just planned some of the finishing details between mixes, cover arts and what we wanted to do after. That’s pretty much it.

What are some of your goals and aspirations for the rest of 2022?

First I want to hit 500k monthly listeners on Spotify. I also want to double my income each month, I want to start getting consistent sync placements, editorial playlisting on Spotify, and my big one is getting a Valee collab. That’s all that comes to mind right now. I don’t have too many concrete goals, I feel like stuff is already moving and I feel motivated without having goals in mind but I do think its good to have something to reach for.