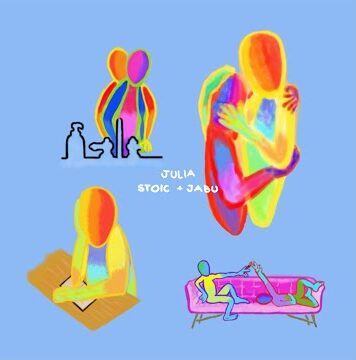 There’s an uprising of young producers who are breaking the mold for what’s normal and Stoic is one of the few who is leading the pack and writing his own rules as he does it.  Coming out of New York and moving to LA it is very clear that this versatile producer has both heavy east coast and west coast influences throughout his tracks.  After recently launching artist collaborations on his own Spotify channel, Stoic has continued to collaborate with artists he is building with and has continued to highlight their talents as well.  This time, linking with Jabu Graybeal to bring an experimental alt-rap track to the spotlight.  “Julia” is the latest collaboration between these two and the vibes are immaculate.

This track blends lyrical genius with incredible production and is a versatile song for any setting.  The song starts out with Jabu showcasing his lyrical ability and follows with Stoic going into an instrumental solo which bridges the gap between Jabu’s verses and hooks.  The song even ties in elements of visual creativity with the standout cover art that matches the aesthetic of Stoic’s previous releases.

If you’re looking for a creative experience through and through, I highly recommend checking out this track as well as both Stoic and Jabu’s catalogs.  I’m excited to see what both of these talented creatives have in store for us throughout the rest of the year!  Make sure to give “Julia” the plays it deserves below.