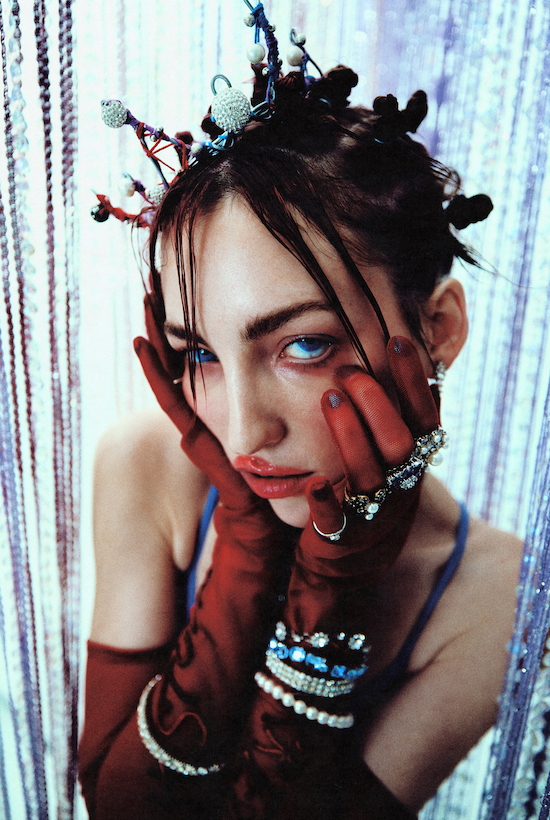 Back again with another one of my favorite upcoming singer-songwriters comes Sophia Bel with her highly anticipated debut LP Anxious Avoidant, produced by Bel and Tim Buron.

Created during the pandemic, Anxious Avoidant uncovers Bel’s vulnerable tales of exploration of relationships, feelings, and emotions throughout her teenage years. Inspired by the sounds of the early 2000’s this album unveils a new chapter in Bel’s career stylistically, composing her songs solely with her guitar. This brilliant album is filled with empowering pop-punk anthems and intimately sweet ballads, driven by Bel’s guitar.

“‘Anxious Avoidant’ is the most vulnerable body of work that I will have ever shared with the world. It is a collection of emotions and states of mind that are very honest and unfiltered. It expresses sides of myself that I am not always proud of. Looking back at what I wrote during the last year, I see myself projecting my hopes and dreams onto other mortal humans, I see a girl who seeks happiness outside of herself, I feel the infatuation that I mistook for real love. I also see how far I’ve come in learning to communicate, being vulnerable, setting boundaries and growing out of the victim mindset. When I was younger it was very comforting to have artists expressing their vulnerability, so in that sense I hope you will relate to this open diary,” Bel explains.

Released as focus tracks before the LP debuts, Bel already shared with the world, “All Fucking Weekend,” “2AM (And I Did It Again),” “Lonely After Curfew,” and a track had previously written on “I Won’t Bite.” (you can read it here)

“All Fucking Weekend” is a brilliant start to the album. The beginning of the song starts off soft which juxtaposes with the latter half of the song moving into a pop-punk and hyper-pop soundscape reminiscent of emotional intensity surrounding relationships. “2AM (And I Did It Again)” showcases a stoner-rock and garage type of sound from Bel – playing with an early 2000’s vibe. This track illustrates Bel’s ability to truly express herself through writing – using her music as an emotional outlet. “2AM and I did it again / Broke my hand trying to say it with a pen / Putting up a fight no one heard at night / Sleeping in,” Bel sings on the intoxicating chorus. “Lonely After Curfew” differs from the earlier tracks as it moves into an intimate progressive pop-country ballad, exploring fears of codependency and abandonment.

Anxious Avoidant includes six brand new tracks: “Everything I Touch Falls Apart,” “I Don’t Need My Space,” “Choke,” “I Only Want You Cuz You’re Mean,” “Just Like A Glove,” and “I Promise I’ll Stop Running From The Light.”

I had the chance to speak with Bel before this long-awaited project was released and learn a little bit more about her artistry, music, and what her future holds.

Samantha: Hey Sophia! How are you?

I’m fabulous, I hope you are too!

Samantha: Take me back to the beginning. What is your background? When did you start making music?

I am from the suburbs of Quebec City, I started singing when I was a toddler and writing songs with my guitar when I was 15.

I was obsessed with Britney Spears as a young girl, and later on was into Avril Lavigne, Fall Out Boy and Taylor Swift (in her country days). I also was listening to my brother’s favorite bands on family road trips, such as Blink 182 and Good Charlotte. I still love listening to those artists because I am a nostalgic melodramatic emo at heart, but I also love newer artists like Soccer Mommy and Indigo de Souza.

Samantha: What is your songwriting process like? Do you work with/collaborate with others or work alone?

For my debut album “Anxious Avoidant” I returned to my roots and wrote it all in my bedroom with a guitar and a notebook. In the past couple of years I have worked on learning to love myself, accepting the parts of my past that I had grown to reject and had tried to forget about. It felt like a full circle moment for me to return to this workflow, because it is how I originally had learned to write music.

Samantha: Is there a favorite lyric you have ever written?

I really like a lyric that is in my song “Just Like a Glove”. “Just like a cat stuck in the bath, drowning with no time to relax. Learning to swim in someone’s storm, could never find my final form.” I wrote this song about people pleasing, and how it felt for me to break my pattern of adapting to people.

Samantha: Can you tell me about your LP Anxious Avoidant?  What would you like your fans to take away from your body of work?

I would like people to listen to it and relate to all the emotions that I am vomiting out of my system. I would like people to embrace being vulnerable. This album was very therapeutic for me to make because I did not set any boundaries for myself when it came to being completely transparent and honest about my fleeting, ugly, pretty, euphoric and devastating emotions.

Samantha: What comes next for you? What does your future look like?

I want to play my songs live with my band and share the beautiful synergy that occurs when humans bring a song to life.

Be sure to listen to Anxious Avoidant below, you will thank me later!